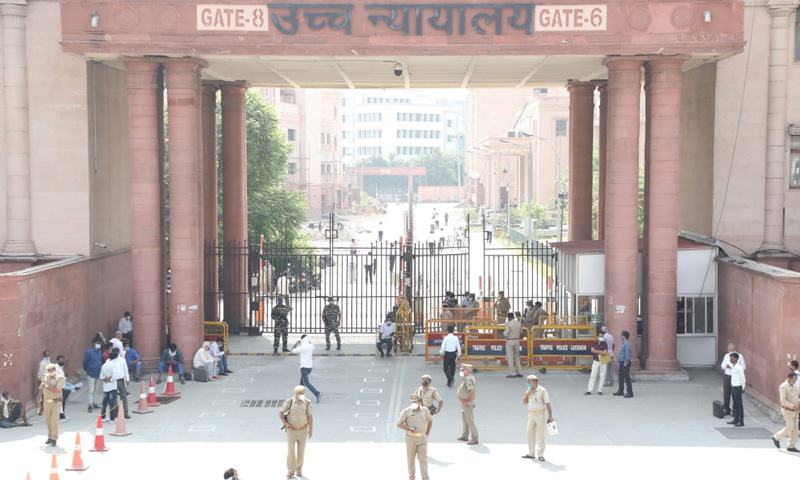 The Allahabad High Court last week upheld the detention order passed against a person allegedly involved in 'brutal murder' of a Hindu mahant, his disciple, and his son while they were sleeping in the night. Upholding the detention order, the Bench of Justice Ramesh Sinha and Justice Narendra Kumar Johari, said thus: "To assassinate a religious person, while sleeping in night,...

The Allahabad High Court last week upheld the detention order passed against a person allegedly involved in 'brutal murder' of a Hindu mahant, his disciple, and his son while they were sleeping in the night.

"To assassinate a religious person, while sleeping in night, strikes at the root of the State's authority and is directly connected to 'public order'. This act of petitioner was not directed against a single individual, but against the public at large having the effect of disturbing even tempo of life of the community and thus, breaching the public order"

The Court was hearing the instant Habeas Corpus Petition, filed by the petitioner, Rajeev Singh, through his next friend/wife Smt. Kiran Singh, challenging the validity and correctness of the detention order dated October 25, 2020 passed by the District Magistrate, Hardoi as well as the confirmation order.

Allegedly, the petitioner engaged in a conspiracy to get 3 persons assassinated i.e., Mahant of the Hulasi Bagiya Ashram, namely, Baba Heeradas, his disciple Meeradas and his son Netram.

The prosecution claimed that on the advice of the petitioner, the main accused Rakshpal, Sanjay, and Shafiq, brutally murdered 3 people by suffocating and assaulting them with bricks, stones, rolling boards, knife and butt of the country-made pistol in Hulasi Bagiya Aashram near Kumaon Village.

On account of the said incident, it was alleged that the public order was completely breached and attempts were made to spread religious fanaticism by various social organizations and political parties.

Essentially, Rakshpal (main accused) and the Petitioner decided to make a forged 'Will deed' and on the basis of the said forged Will, Rakshpal wished to become the owner of the whole property of the Ashram of the deceased Mahant, and promised that he would give 1/3rd of the land to the petitioner.

Later on, Rakshpal discovered that mahant Heeradas had already made a 'Will deed' in favour of his disciple Meerdas and he had prepared for selling seven bigha of land and also wanted to evict him from the Ashram.

On this, they both decided to killed all the three persons so that no heirs remain alive and both of them could succeed in their design.

Reason for the passing of detention order

Investigating Officer found the involvement of the petitioner in the crime and has filed the charge sheet before the competent Court.

It was claimed that the petitioner was having a criminal history of 21 criminal cases, which were registered at various police stations of the district and on account of the said triple murder, thousands of villagers of village Kuamau and nearby villages had gathered at the place of occurrence and a panic situation had prevailed in the village.

It was claimed that the children and women had closed their doors due to fear and on account of the death of Mahant, a malicious attempt was made to spread religious frenzy. The different political and social party have tried to disturb social harmony.

Allegedly, the atmosphere remained panic for about ten days. Extra forces and P.A.C. were also deployed to bring the situation under control.

Significantly, it was alleged that on October 5, 2020, the petitioner applied for bail before the Court which was fixed for October 27, 2020 and there was a possibility of release of the petitioner on bail and that he would again indulge in such activities which were likely to affect adversely public order.

Therefore, to prevent him from committing similar activities prejudicial to the maintenance of public order, detention order under Section 3 (2) of the Act, 1980.

The Court observed that even one solitary incident may give rise to the disturbance of 'public order' and noted that the activities relied upon by the Detaining Authority to come to the detain, cannot be said to be mere disturbance of "law and order".

The Court also observed that on getting information of triple brutal murder, thousands of villagers of village Kuamau and nearby villagers were gathered there.

"In the village, fear and panic atmosphere were prevailed. The children and women closed their doors due to said panic. On account of the murder of Mahant, religious fanaticism had erupted. The normal life in the village was paralysed, which resulted in disturbance of public order and public tranquility," noted the Court.

Consequently, the Court opined that the apprehension entertained by the Detaining Authority, to the effect that petitioner's activities are prejudicial to the maintenance of public order, was genuine and well founded.