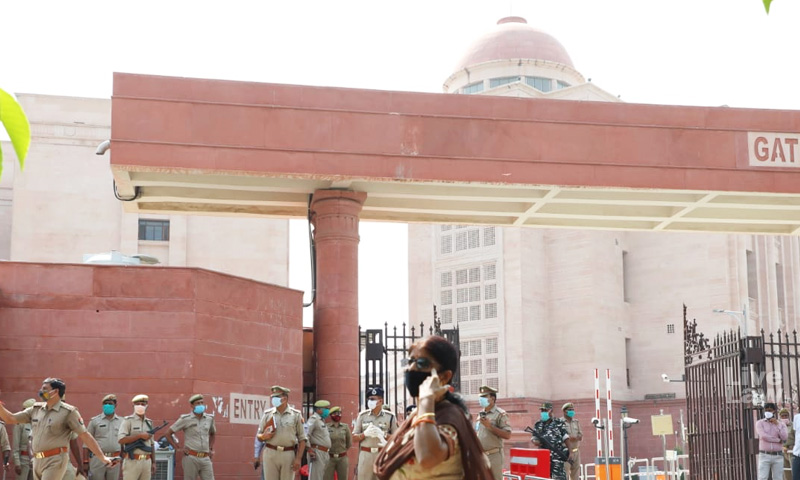 The Allahabad High Court on Thursday directed the Election Commission of India to start the process for holding bye-elections in Uttar Pradesh's State Assembly Constituency, "Suar" Rampur, forthwith. "The Election Commission of India has not been able to justify as to why and under what circumstances, bye election has not been held on the aforementioned constituency despite...

"The Election Commission of India has not been able to justify as to why and under what circumstances, bye election has not been held on the aforementioned constituency despite the vacancy having occurred on 26.12.2019 and duly notified long back by the State Assembly on 27.02.2020", observed Justices Shashi Kant Gupta and Pankaj Bhatia.

The division bench expressed the view that the Election Commission has failed to perform its constitutional and statutory duty to hold the bye election for the aforementioned constituency within the time prescribed under Section 151A of the Representation of People's Act, 1950.

"The whole controversy in the present writ petition is with regard to not holding bye-election of UP State Assembly Constituency, 'Suar', Rampur, despite the seat falling vacant on 16.12.2019 and issuance of notification by the State Assembly on 27.02.2020, after the election of Mohammad Abdulla Azam Khan (son of Samajwadi Party MP Mohammad Azam Khan) from the aforesaid 'Suar' Assembly was declared void and consequently set aside on 16.12.2019, in an election petition, by this Court", noted the bench.

The bench recorded that being aggrieved by the order dated 16.12.2019 passed by this Court, Mohd Abdullah Azam Khan filed a Civil Appeal wherein notice was issued by the Apex Court.

The contention of the petitioner, a former Chairman of the Nagar Palika Parishad of the said constituency, was that once the election has been set aside by the High Court in the Election Petition and no interim order has been passed and a vacancy has been duly notified by the State Assembly, there cannot be any justification for the Election Commission not to hold the elections. By not holding the elections, the Election Commission has failed to perform its constitutional duty and suppressed the voice of the people who deserve to be represented through an elected representative. In support of his contention, he referred to Section 151(A) of the RPA.

"Perusal of the aforesaid section clearly indicates that a bye election for filling up any vacancy referred to in any of the sections mentioned therein shall be held within a period of six months from the date of occurrence of the vacancy", appreciated the bench.

The bench did not find substance in the argument advanced in this regard. It noted that since the election of the Mohd. Abdullah has already been declared void and no interim protection granted by the Apex Court, as such, Mohd. Abdullah was neither a necessary nor a proper party in this petition, as the controversy is with regard to not holding of bye election for the aforesaid constituency within the period specified under section 151-A of the Act.

The Court further noted that in the present writ petition, it has been categorically stated that Mohd. Abdullah has filed an appeal challenging the order of this Court under Section 116A of the Act but he has not been granted any interim order by the Apex Court under Section 116B of the Act. The counsel for the Election Commission, while referring to Section 116-C of the Act, had contended that after deciding the appeal, the Supreme Court shall intimate the substance of the decision to the Election Commission and the Speaker or Chairman, as the case may be, of the House of Parliament or of the State Legislature concerned and as soon as may be thereafter shall send to the Election Commission an authenticated copy of the decision; and upon its receipt, the Election Commission shall forward copies thereof to the authorities to which copies of the order of the High Court were forwarded under section 106 of the Act. In view of the aforesaid position, it was sought to be submitted that no bye elections can be held during the pendency of the appeal before the Apex Court.

"However, it does not in any way effect the operation and effect of section 151-A. Furthermore, there is no interim order which has been passed by the Hon'ble Apex Court, despite there being a specific provision contained in Section 116-B of the Act. In the present case, it may be noted that the Apex Court has not stayed the operation and effect of the order dated 16.12.2019 passed in Election Petition No. 8 of 2017, by this Court, setting aside the election of Mohammad Abdulla Azam Khan", observed the bench

Therefore, in its considered opinion, the provisions of Section 116-C did not have any applicability to the facts and circumstances of the present petition.

"The submission of the counsel for the Election Commission is also liable to be rejected in view of a clear mandate of the Act as clarified under Section 107...Clause (1) of Section 107 is clear answer to the argument of counsel for the Election Commission inasmuch it categorically provides for the date and period from when the order of the Court shall take effect from and is only subject to any interim order by the Appellate Court", stated the bench.

The bench further opined that the reliance placed on the top court judgment inElection Commission of India v. Telangana Rastra Samithi was also completely misconceived since the aforesaid judgment is clearly distinguishable and has no application to the facts and circumstances of the present case. It was noted that in the aforesaid case the Apex Court has held that Section 151-A does not pertain to vacancy/seat in respect of which election petition is pending, where relief for declaration has been sought in terms of the latter part of Section 84 of the Act, to the effect that declaration is sought he (election petitioner) may himself or any other candidate be declared duly elected.

Thus, it concluded that the ratio in the aforesaid judgment has no applicability to the facts of the present case.

"Democracy is a system of government in which a country's political leaders are chosen by the people in regular, free, and fair elections. In a democracy, people have a choice between different candidates and parties who want the power to govern. The people are sovereign. They are the highest authority and government is based on the will of the people. The Will of people is supreme. It cannot be lightly interfered with", remarked the bench.

It asserted that the Election Commission under no circumstance can frustrate the will of the people. "This Court, which is a custodian of the Constitution cannot be a silent spectator in a case of this nature where the Election Commission has failed to exercise its powers in a manner which has the effect of destroying or making erosion in to the democratic set up, which is a part of the basic structure of the Constitution", declared the bench, requiring the Commission to conduct the elections immediately.

Mohd. Abdullah Azam Khan was elected as Member in the UP State Legislative Assembly from Constituency 'Suar', District Rampur. Thereafter, an Election Petition was filed before this Court in 2017 by one Nawab Kazim Ali Khan challenging the election, alleging that Mohd. Abdullah Azam Khan was less than 25 years of age and therefore he was not qualified to contest the elections in terms of Article 173(b) of the Constitution of India. The Court after hearing the parties vide judgement and order dated 16.12.2019 allowed the election petition and the election of Mohd. Abdullah Azam Khan was declared void and consequently set aside and information in this regard was sent to the Registrar General of this Court, Election Commission and the Speaker of the UP Legislative Assembly. Thereafter a Notification dated 27.02.2020 was issued by the Principal Secretary, U.P. State Assembly, indicating that after passing of the order by the High Court, a vacancy has occurred on the aforesaid constituency w.e.f. 16.12.2019.