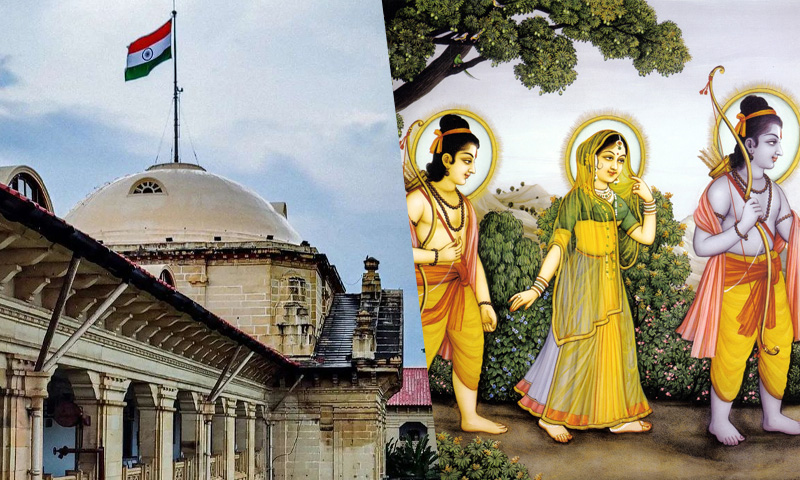 The Allahabad High Court recently dismissed a Public Interest Litigation (PIL) plea seeking a direction to the State Government to construct the 'Ram Ban Gaman Marg' as per the historical evidence and to connect all such places where Lord Rama took rest at night during his forest Travel (Ban Gaman/वन-गमन).

The Bench of Chief Justice Rajesh Bindal and Justice J. J. Munir observed that the issue raised by the Petitioner, a political person, cannot be decided in the writ petition. Therefore, the Court dismissed the plea.

It is widely believed that Lord Rama, in his 14-year journey from Ayodhya to Sri Lanka, visited 248 prominent places where he either took rest or had some connection with them. Today these places are remembered as the forest journey of Rama (Ram Ban Gaman Path).

In the State of Uttar Pradesh, the journey of Lord Rama started from Ram Janmabhoomi Ayodhya and went through Pratapgarh, Prayagraj, Kaushambi to Chitrakoot. This path is called Ram Vanagaman Path (राम वनगमन मार्ग). Its length is about 177 kilometers.

The Uttar Pradesh Government has already taken a decision to develop Ram Vanagaman Marg with a cost of over Rs. 4000 crores. In connection with this decision, the instant PIL plea had been moved by Petitioner (Rajneesh Kumar Pandey).

The PIL plea prayed for the following direction to the Union and the UP Governments:

- To modify the route which is published in the newspaper as per the evidence of record;

- To connect all places where Lord Ram took rest at night during the Travel of Forest (Ban Gaman).

- To take proper action and not disobey the Route of the Lord Ram Ban Gaman and connect all the places where Lord Ram traveled during hi Ban Gaman.

Stressing that the writ petition had been filed for some ulterior motive, the Court noted that the State must have conducted thorough research before making the decision to execute the project in question, and therefore, no direction can be issued for modification of the route of "Ram Van Gaman Marg".

The petition was, accordingly, dismissed.