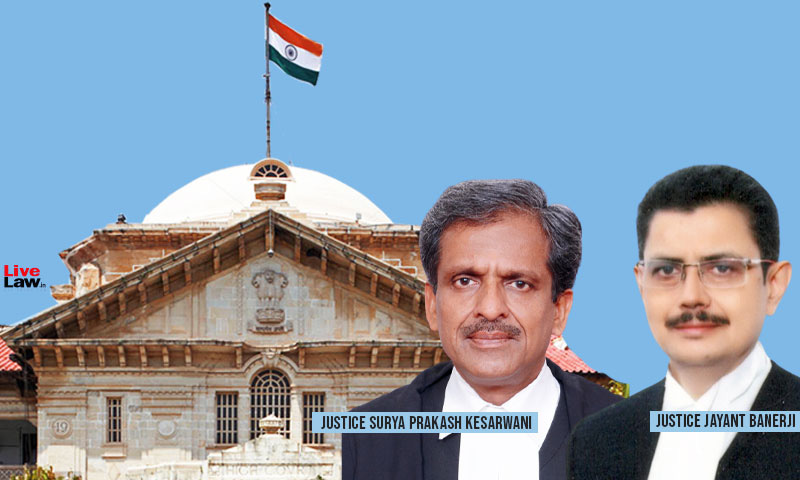 The Allahabad High Court has directed that the Union of India or other authorities under the Income Tax Act, 1961 shall not interfere with the quasi-judicial functions and discharge of statutory duties by the Assessing Officers unless permitted by the Income Tax Act.

Further, the High Court directed the Union of India to put in place a mechanism to ensure that the information fed on data-base/ portal of the revenue department is verified in reality, and not as an empty formality, before initiating proceedings under the Income Tax Act, 1961.

The Bench of Justices Surya Prakash Kesarwani and Jayant Banerji was dealing with a writ petition filed by the assessee against the reassessment proceedings initiated against it on the basis of false information uploaded in the insight portal of the revenue department.

A notice under Section 148 of the Income Tax Act, 1961 was issued to the petitioner/ assessee- SR Cold Storage on the ground that, as per the information received by the revenue department, the petitioner/assessee had deposits in its bank account which constituted its undisclosed income and which had escaped assessment to tax.

A show cause notice/ draft assessment order was issued by the revenue authorities seeking to make additions to the assessee's income. The petitioner submitted a reply to the said show cause. However, the Income tax Authority, without considering the reply and the documentary evidences filed by the petitioner, passed a reassessment order under Section 147 read with Section 144B of the Income Tax Act.

The assessee filed a writ petition before the Allahabad High Court challenging the notice issued to it under Section 148 and the reassessment order passed against it.

The assessee SR Cold Storage submitted before the High Court that the information collected on the insight portal of the revenue department, on the basis of which reassessment proceedings were initiated against it, was incorrect. The assessee added that the reply submitted by the assessee was not considered by the Assessing Officer before passing the re-assessment order. Thus, the assessee averred that the entire proceedings initiated against the assessee under Sections 148 of the Income Tax Act was without jurisdiction, and that it constituted an arbitrary exercise and gross abuse of power.

The assessee contended that it repeatedly requested for a hearing through video conferencing, however, the revenue authorities denied the assessee the opportunity of hearing.

The revenue department averred that since an alternative remedy of an appeal under Section 246A of the Income Tax Act was available to the assessee, therefore, the writ petition must be dismissed.

The Union of India averred that the information, on the basis of which reassessment proceeding were initiated against the assessee and the reassessment order was passed, was wrong. The revenue department conceded that as per the information uploaded in the insight portal of the revenue department, the cash deposited by the petitioner/assessee was 4 times the actual cash deposit by the assessee in the relevant Bank. The department submitted that the said information was uploaded by the Deputy Director Income Tax (Inv.), Kanpur.

The Court observed that the assessee, along with its reply to the draft assessment order, had filed various documents including its copy of Form 26AS, details of cash deposit in the relevant Bank Account, along with a copy of the bank account statements for the relevant financial year. However, the Court noted that there was no mention or consideration of the reply or objections submitted by the petitioner in the reassessment order passed by the Income tax Authority.

"Thus, as per own admitted case of the respondents, the cash deposit of Rs.3,41,81,000/- was made by the petitioner in its bank account with Union Bank of India and there was absolutely no cash deposit by the petitioner in Bank of Baroda whereas the entire reassessment proceedings under Section 147/148 of the Act, 1961 against the petitioner, was initiated on the alleged information of cash deposit of Rs.13,67,24,000/- by the petitioner in its bank account with Bank of Baroda. Thus, the reason to believe for initiating proceedings under Section 147/148 was totally unfounded and false. In fact initiation of proceedings and passing the impugned reassessment order dated 31.03.2022 is a glaring example of highhandedness, arbitrary actions and abuse of power by the respondents on the one hand and on the other hand, flagrant violation of principles of natural justice by them.", the Court said.

The Bench added that the approach of the revenue authorities, by denying the assessee the opportunity to be heard, proved the arbitrary exercise of powers and the denial of principles of natural justice by them.

Holding that audi alteram partem is the first and foremost principle of natural justice, the Court ruled that in the absence of a notice which provides a kind and reasonable opportunity to be heard, the order passed becomes wholly vitiated. The Court added that even an administrative order which involves civil consequences must be consistent with the rules of natural justice.

"Expression `civil consequences' encompasses infraction of not merely property or personal rights but of civil liberties, material deprivations, and non-pecuniary damages. In its wide umbrella comes everything that affects a citizen in his civil life.", the Court held.

Noting that to give reasons is the rule of natural justice, the Court ruled that an order without valid reasons cannot be sustained.

The Court added that despite the material disclosed by the assessee before the revenue authorities supporting its contention that it had not deposited any cash in the said bank account, the revenue authorities failed to consider the objections and the reply submitted by the assessee and further, they failed to record any reasons for its rejection. Thus, the Court held that the Income Tax Authorities had deliberately violated the right to reason, which is an indispensable part of a judicial system.

Hence, the Bench ruled that in the absence of any valid information for invoking jurisdiction under Section 147/ 148 of the Income Tax Act, 1961, the entire proceedings initiated against the assessee were without jurisdiction; hence, the objection raised by the revenue department regarding the maintainability of the writ petition on the ground that an alternative remedy of appeal was available to assessee could not be accepted.

"It is settled law that if a public functionary acts maliciously or oppressively and the exercise of power results in harassment and agony then it is not an exercise of power but its abuse. No law provides protection against it. Harassment by public authorities is socially abhorring and legally impermissible which causes more serious injury to society. In modern society no authority can arrogate to itself the power to act in a manner which is arbitrary.", the Court said.

The Bench added that the Allahabad High Court in the case of Nabco Products Private Limited versus Union of India (2022) had noticed the increasing tendency amongst the Assessing Officers, particularly the National Faceless Assessment Centre, to violate the principles of natural justice, not consider the replies of the assessees, or reject them without recording any reasons, and hence, the High Court had expressed the need for evolving an effective system of accountability of the erring officers.

The Court observed that the Union of India, in the counter affidavits filed before the Court, had contended that the Income Tax Officers are bound by the information provided on the data-base/ portal of the revenue department and that it is not for them to question its authenticity and veracity, since if the officers are found to omit or ignore such data, they shall be liable to explain the reasons and may be subjected to departmental action. The Court ruled that the stand taken by the Union of India cannot be said to be justified or conceived.

Holding that the stand taken by the Union of India would leave nothing in the hands of the Assessing Officer and the authorities under the Income Tax Act to adjudicate issues except to impose tax on the basis of information fed on the data-base/ portal of the department, the Court ruled that such a situation was indicative of creation of chaos in the discharge of quasi-judicial functions by the Assessing officers and other authorities under the Income Tax Act.

"It is evident that all settled principles of law, duty to discharge quasi-judicial function and observance of statutory provisions of the Act, 1961 have been given complete go-bye and participation of assessees in proceedings under Section 148A or 148 or 147 of the Act, 1961 would remain an empty formality, inasmuch as the Assessing Officer would create liability on assessees only on the basis of data fed in the data base/ portal of the department and would not like to adjudicate the matter in accordance with law so as to take risk of initiation of disciplinary proceedings against himself."

The Court further directed the Union of India to put in place a mechanism to ensure that the information fed on data-base/ portal of the revenue department is verified in reality, and not as an empty formality, before initiating proceedings under Section 148A/ 148/147 of the Income Tax Act, 1961 so that the bona fide assessees do not face harassment and the tax evaders do not escape due to the lapses of the departmental officers. Also, the Central Government was directed to consider developing a mechanism of accountability of the officers who do not observe the statutory provisions under the Income Tax Act or who fail to discharge their quasi-judicial functions, or act in complete breach of the principles of natural justice.

Observing that the information on the basis of which the reassessment proceedings were initiated against the petitioner, were admitted to be incorrect by the revenue department, the Court ruled that there was a complete failure to observe the rule of law on the part of the revenue authorities. The Court added that the revenue authorities acted arbitrarily, illegally without jurisdiction, caused harassment to the petitioner and abused the power conferred under the Income Tax Act, resulting in the creation of an illegal demand of income tax of Rs.16,90,61,731. Thus, the Court quashed the notice issued under Section 148 and the reassessment order passed under Section 147 read with Section 144B, and imposed a cost of Rs. 50,00,000/- on the Income Tax Authorities, directing them to deposit the amount in the Prime Minister National Relief Fund.