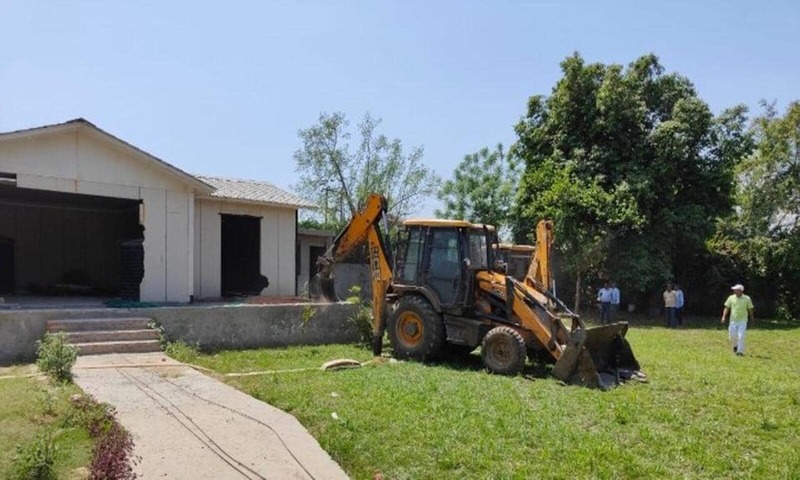 A petition has been moved before the Allahabad High Court challenging a public notice issued by the NOIDA Authority on June 8 declaring that no construction is permissible in the Yamuna/Hindon flood plains area and all the constructions therein shall be liable to be demolished.

In the past few days, several farmhouses/structures were demolished by the Noida Authority in its anti-encroachment drive amid heavy police deployment stating that the constructions were illegal.

Plea moved in Allahabad High Court challenging the 'illegal' public notice issued by NOIDA authority on June 8 which stares that alleged illegal farm houses built on the Yamuna Flood Banks are liable to be demolished. pic.twitter.com/sCGisaBSrQ

The plea has been moved by Harit Kisan Kalyan Samiti through Advocate Ashwarya Sinha which represents the interest of people who reside in the area concerned which could be targeted by the NOIDA Authority during their demolition drive.

The members of the Petitioner society are the occupants of homes situated in the Yamuna Flood Plains and they have approached the Court with an apprehension that NOIDA Authority may carry out illegal demolitions of their homes without due notice to each of the members.

The plea essentially challenges the legality and validity of the "Public Announcement" dated June 8, 2022, issued by the CEO of NOIDA Authority whereby a blanket declaration had been issued stating that all construction on the Yamuna Flood Plains is illegal and liable for demolition.

The plea submits that the Petitioner Samiti and its members are having all requisite title documents along with electricity connection and other municipal compliances and thus, it stresses that the notice is ipso facto illegal, and is contrary to the established principles of administrative law, as also the substantial law and the governing provisions determining due procedure.

Read the notice issued by the NOIDA Authority here:

"The Public Notice fails to provide any details of the purported properties which are considered to be illegal and no basis has been provided for their alleged illegality. It is submitted that the Public Notice dated 08.06.2022 has miserably failed to address the regulation/notification/order under which construction on flood plains is prohibited, and therefore cannot be said to be an effective notice, since no basis has been provided under the notice pertaining to the alleged and purported illegality of the construction...The Public Notice is vague, generic and prima facie shows a non-application of mind as no attempt has been made to disclose who is potentially affected by the Public Notice and who in fact has violated either the provisions of the Act or the specific regulations issued thereunder or what the nature of a non compliance (if any) has been committed to warrant removal of construction that has been done."

Against this backdrop, the Plea prays for the following relief

- Quash the public notice dated 08.06.202 passed by the CEO, NOIDA Authority, and further direct it not to take any coercive action against the petitioner in pursuance to the impugned notice.

- Direct NOIDA Authority not to take any action against the petitioner in pursuance to the impugned notice dated 08.06.2022 (passed by respondent no. 1) or further restraining the respondent from proceeding with any demolition against the members of the Petitioner Society