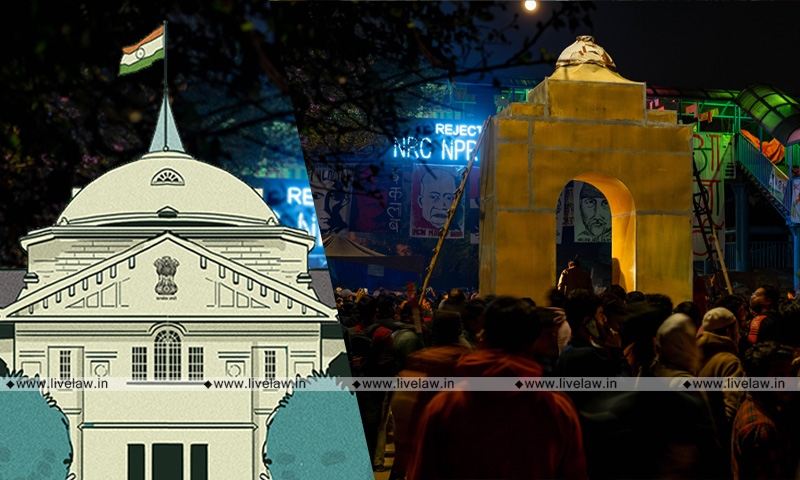 The Allahabad High Court recently quashed detention orders passed against 6 persons on account of their alleged participation in the violent demonstration against the N.R.C./C.A.A. that took place on December 16, 2019, in Mau.Essentially, the bench of Justice Sunita Agarwal and Justice Sadhna Rani (Thakur) was dealing with a clutch of Habeas Corpus pleas, wherein directions were sought...

The Allahabad High Court recently quashed detention orders passed against 6 persons on account of their alleged participation in the violent demonstration against the N.R.C./C.A.A. that took place on December 16, 2019, in Mau.

Essentially, the bench of Justice Sunita Agarwal and Justice Sadhna Rani (Thakur) was dealing with a clutch of Habeas Corpus pleas, wherein directions were sought for quashing the District Magistrate, Mau's detention order detaining the 6 persons.

The pleas also sought quashing of the State Government's order extending their detention period for a further period of three months.

On December 16, 2019, a violent protest took place against the N.R.C./C.A.A. laws, thereafter, an FIR was registered in the matter against several person including the present petiitoners.

The Circle Officer, City, Mau, after perusal of the report of the Incharge Inspector, Police Station where FIR was lodged, recommended for forwarding the said report to the Higher Authority.

The said report was, then forwarded to the District Magistrate, Mau by the Superintendent of Police with his recommendation for taking action under the NSA against the present petitioenrs.

The District Magistrate, Mau after considering the entire material and recording his subjective satisfaction passed the detention orders dated September 3, 2020 invoking power under Section 3(2) of the National Security Act. On the same day, the grounds of detention alongwith other relevant material were served upon the petitioners.

As per the detaining authority (District Magistrate, Mau), the petitioners had been detained under the National Security Act (NSA) in order to restore the peace and to maintain public order.

It was contended that the petitioners/detenues were making efforts to get bail in the criminal cases lodged against them under the Gangster Act by moving bail applications in the High Court at Allahabad, therefore, it was found necessary to detain them.

Thereafter, the detention order, the grounds on which the order has been made and the representation alongwith the report of the officer under sub-section (4) of Section 3 was sent to the Advisory Board on Sepetmebe 28, 2020 (as per section 10 of NSA).

At the outset, the Court noted that as per the mandate of Section 10 of the NSA, the appropriate Government had to send all the materials as aforesaid within 3 week, however, in the instant case when the material was sent to advisory board on September 28, 2020, three weeks had already passed.

Against this backdrop, finding the detention to be illegal, the Court observed thus:

"Having considered the mandate of Article 22(5) read with Section 10 of the National Security Act, we find in the facts of the instant case that the deadline for placing all papers, i.e. the ground of detention, the representation and the report of the detaining authority before the Advisory Board had not been adhered to by the State Government. The non-compliance of the mandatory provision of Section 10 of the NSA renders the detention orders illegal."

Further, the court also discarded the argument of the State Government that the report was submitted by the Advisory Board within the prescribed period of seven weeks from the date of detention of the petitioners and thus, Section 11(1) of the Act has been complied with in the instant case as it observed thys:

"The maximum period prescribed under Section 11(1) to submit the report by the Advisory Board to the appropriate Government cannot be taken to condone the delay on the part of the State Government, in placing the matter before the Board which in turn had occurred on account of the delay caused at the ends of the District Magistrate, Mau/the detaining authority. The deadline for the action of every authority at every stage of the decision making process has been fixed under the Act in order to meet the constitutional obligation under Article 22(5) of the concerned authority/Government"

Significantly, the Court also held that the subjective satisfaction recorded by the District Magistrate to arrive at the conclusion of detaining the petitioners [vide order September 3, 2020] was not based on any relevant material which would form an objective criteria to reach at the decision.