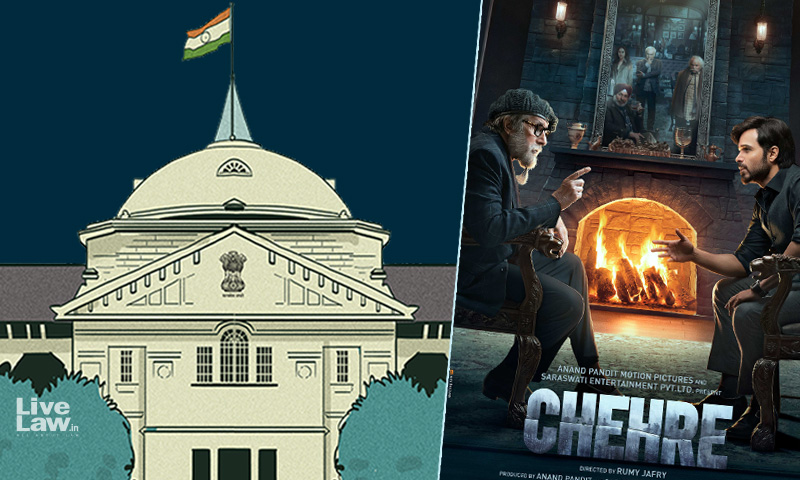 The Allahabad High Court recently refused to grant a stay on the release of Amitabh Bachchan starrer 'Chehre' in an appeal filed by Writer Uday Prakash alleging copyright infringement by Producer Anand Pandit and Director Rumi Jaffery.Justice JJ Munir refused to grant any interim relief in the appeal filed against the order passed by District Judge Jitendra Kumar Sinha, wherein he had...

Justice JJ Munir refused to grant any interim relief in the appeal filed against the order passed by District Judge Jitendra Kumar Sinha, wherein he had rejected the application seeking a temporary injunction.

In the prima facie opinion of this Court, there is, apart from the fundamentals of the basic theme that appear to have come from a common source, no such distinctive feature in the copyrighted version that have been prima facie plagiarized.

Hindi Poet, Scholar, Filmmaker and Journalist Uday Prakash had filed a suit in December, 2019, wherein a temporary injunction application was made against infringement of a copyright owned by the Prakash relating to a story-screenplay-dialogues for a feature film, registered with the Copyright Office at New Delhi under the name of 'Highway-39' in 2007.

Prakash had discussed the copyrighted work with one of his acquaintances, Mazhar Kamran, who was, at the relevant time, working with the plaintiff as a Cameraman on several audio visual projects that the plaintiff had in hand during the years 2000-2005.

In June, 2019, the appellant came to know, from reliable sources in the Film Industry, that respondent no.1 was making a movie with the title of 'Chehre'  under the direction of respondent no.2, which was based exactly on the same 'plot and premise' as the his copyrighted work .

The appellant then sent a 'cease and desist' notice to the defendants on June 14, 2019 which was answered through a reply on June 29, 2019, denying infringement of the copyrighted work.

It is the case of the appellant that the respondents signed high profile artists like Amitabh Bachchan, Emraan Hashmi and Rhea Chakraborty to work in the feature film without taking his permission to use his copyrighted work and converting his literary work into a motion picture.

The Court compared the copyrighted script that was provided by the appellant and the script on which the feature film was founded.

What was to be seen, the Court added, was whether the appellant's treatment of the theme in his original way had been plagiarized.

"The law appears to be that infringement of a copyright is not about the novelty of the work, but about its originality. A very old theme may receive a different and distinctive creative development at the hands of different individuals. Both would be entitled to the copyrights of their originality. The commonality of the theme would not offer any cause of action for infringement."

The Court went on to refer to the case of  R.G. Anand v. Delux Films and others where the Supreme Court had made a wholesome consideration as to what would constitute infringement of a copyright.

"2. Where the same idea is being developed in a different manner, it is manifest that the source being common, similarities are bound to occur. In such a case the courts should determine whether or not the similarities are on fundamental or substantial aspects of the mode of expression adopted in the copyrighted work. If the defendant's work is nothing but a literal imitation of the copyrighted work with some variations here and there it would amount to violation of the copyright. In other words, in order to be actionable the copy must be a substantial and material one which at once leads to the conclusion that the defendant is guilty of an act of piracy ........

4. Where the theme is the same but is presented and treated differently so that the subsequent work becomes a completely new work, no question of violation of copyright arises."

A comparison between the two scripts prima facie showed that although the principle theme was common, there were a host of differences in the script leading to the feature film.

"There is, thus, prima facie a materially different and distinctive development and treatment of the same theme in both the scripts. In the prima facie opinion of this Court, there is, apart from the fundamentals of the basic theme that appear to have come from a common source, no such distinctive feature in the copyrighted version that have been prima facie plagiarized", the Court added.

Justice Munir further remarked that whatever comparison had been done, was not, in any manner, a final expression of opinion on merits about the distinctive similarities or the dissimilarities.

"That is something that has to await trial, where wholesome evidence would now be led. All the remarks here are limited to the decision of the temporary injunction matter and nothing more", the Court added.

Additionally, the Court examined the issue as to what would happen if at the hearing, the plaintiff were to ultimately succeed.

"Would damages alone be recompense enough? There is relief sought by way of a decree for rendition of accounts of the advance amount received by the defendants from the distribution companies, television channels, OTT platforms, television networks by selling distribution rights/ streaming rights of the feature film, infringing the plaintiff's copyright. The said decree would entitle the plaintiff, if he succeeds, to proportionate proceeds on account, as may be determined that the film earns. But, apart from that, if the copyright is ultimately held to be infringed at the trial, monetary compensation may not be recompense enough."

With this thought the Court held that if the plaintiff (present appellant) succeeded, all further displays of the feature film shall have to carry an acknowledgment, suitably to be displayed that the movie is based on the copyrighted work, which is the plaintiff's authorship.

The Court also directed that the trial of the suit is be expedited.

The District Judge was thus directed to fix one date every week and endeavor to conclude the trial within four months.