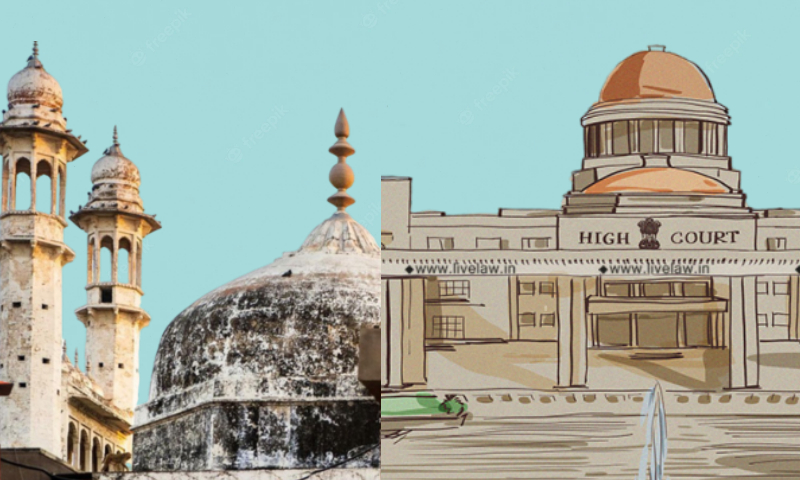 The hearing in the ongoing matter before the Allahabad High Court in connection with the Kashi Vishwanath temple-Gyanvapi mosque dispute got completed yesterday and now, the Court has reserved its order in the matter.

The bench of Justice Prakash Padia has reserved its verdict in a plea moved by the Anjuman Masjid Committee (which manages the GYANVAPI MOSQUE) challenging an order of the Varanasi Court to conduct an archaeological survey of the Kashi Vishwanath Temple-Gyanvapi Mosque complex to determine whether a Hindu temple was partially razed to build the Gyanvapi mosque in the 17th century.

The petition challenging the Varanasi court's ASI order was clubbed with other related pleas (in total five petitions) and in three pleas, the order had earlier been reserved, now in the remaining two pleas too (concerning ASI Survey), the order has been reserved yesterday.

In this matter, earlier on October 31, the Director General of the Archeological Survey of India had filed her personal affidavit before the High Court expressing ASI's willingness to abide by what the Court decides regarding the survey of the Mosque complex.

About Varanasi Court's April 2021 order in which the ASI was asked to conduct a comprehensive survey of the Gyanvapi Mosque complex, the ASI's DG had stated that ASI is competent to take up the survey work if the Allahabad High Court so orders. It may be noted that the proceedings in the matter pending before the Varanasi Court was stayed by the Allahabad High Court in September 2021, effectively staying the ASI Survey order as well.

The stay on Varanasi Court's proceedings has been extended till the delivery of the Judgment.

The Anjuman Intezamiya Masajid Varanasi has also challenged the proceeding before the Varanasi court in which an ASI survey had been ordered last year, the High Court stayed that very order last year in September.

Earlier, the contesting respondents argued before the Court that the petitioner [Anjuman Intazamia Masazid, Varanasi] had initially filed an application under Order VII Rule 11(d) CPC for rejecting the plaint (of the Ancient Idol Of Swayambhu Lord Vishweshwar) however, they did not press the same for a considerable time and instead of pressing the aforesaid application, they chose to file written statement in the plaint.

It was further argued by the counsel for the respondent that on the basis of pleadings in the suit, the issues were framed by the Varanasi Court. The Counsel also submitted that the property in question, i.e. the temple of Lord Visheshwar has been in existence from ancient times, i.e., Satyug up till now.

It was his further submission that the Swayambhu Lord Visheshwar is situated in the disputed structure, and therefore, the land in dispute is itself an integral part of Lord Visheshwar.

On the argument put forth by the Majid committee that since the plaint was barred by the provisions of the Places of Worship (Special Provisions) Act, 1991, the same should be rejected, the respondents have argued that the religious character of the place of worship remained the same as on the day of August 15, 1947, therefore, the provisions of Place of Worship Act, 1991 cannot be applied.