"An Atmosphere Of Fear Has Been Created; My Family Is Always Concerned About My Safety": Varanasi Judge In 'Gyanvapi Survey' Case 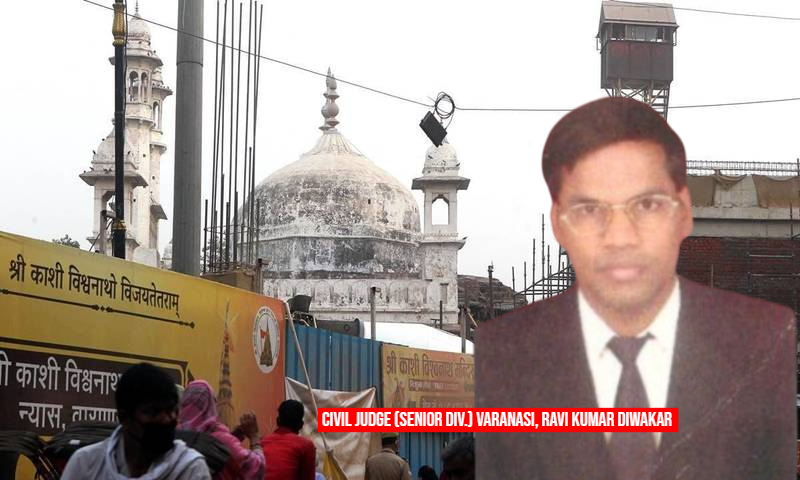 "An atmosphere of fear was created by making this simple civil case into an extraordinary case. The fear is so much that my family is always concerned about my safety and I am concerned about their safety. Concerns about safety are repeatedly expressed by my wife when I am out of the house", Civil Judge (Sr. Di.), Varanasi Court, Ravi Kumar Diwakar remarked today as he ordered the continuation of the survey of Gyanvapi Mosque premises.

The Judge remarked thus while rejecting an application filed by the Anjuman Islamia Masajid Committee (Respondent) to change the advocate commissioner appointed in the case to survey the Gyanvapi Mosque premises.

Thereafter, a petition was filed on behalf of the Anjuman Islamia Masajid Committee demanding the removal of Advocate Commissioner Ajay Kumar Mishra. After 3 days of arguments, the Court ordered that the survey of the premises shall continue.

In its order, the Judge expressed his own concerns about the safety of his family and their anxiety over the safety of the Judge. In the order, he remarked thus:

"An atmosphere of fear was created by making this simple civil case into an extraordinary case. The fear is so much that my family is always concerned about my safety and I am concerned about their safety. Concerns about safety are repeatedly expressed by my wife when I am out of the house. Yesterday, my mother (in Lucknow) during our conversation also expressed concerns about my safety, and from the news received by the media, she came to know that maybe I am also going to the spot as commissioner and my mother asked me that I should not go on commission on the spot, as it may endanger my safety."

The Court also opined that it was not justiciable to question the appointment of Advocate Ajay Mishra as Court commissioner as he had only conducted a partial survey of the premises pursuant to the Court's orders.

The opposite parties were demanding that the Court Commissioner should be changed as he working under the pressure of the petitioners. However, the Court did not find any ground in their prayer.

Refusing to remove the Advocate Commissioner Ajay Kumar Mishra, who was appointed for the survey of Gyanvapi Masjid, the Court has, however, appointed two new commissioners - Vishal Kumar Singh and Ajay Singh.

In their arguments before the Court, the 5 petitioners argued that the Advocate Commissioner was not allowed to do videography and survey by the opposite parties on the other side of the barricading i.e. inside the Gyanvapi Masjid and in the basement.

It has also been said on behalf of the petitioners that the opposite parties prevented him from going inside the Gyanvapi mosque and inside the basement saying that there is no such order of the court.