[Anti-CAA Protests] Trial Pending In Over 50% Cases, Probe Incomplete in Most FIRs: Delhi Police To HC

More than two years after violence broke out in the national capital in connection with the anti-CAA protests, Delhi Police has said that out of the total 541 FIRs registered against those who damaged public and private properties, only eight have been decided in the courts and trial is pending in 51 percent of the cases.The police has submitted the list of cases along with a...

More than two years after violence broke out in the national capital in connection with the anti-CAA protests, Delhi Police has said that out of the total 541 FIRs registered against those who damaged public and private properties, only eight have been decided in the courts and trial is pending in 51 percent of the cases.

The police has submitted the list of cases along with a counter-affidavit before Delhi High Court in response to a public interest litigation seeking recovery of damages from the persons who allegedly indulged in destruction of public property during the 2020 riots.

The official reply dated September 20 reveals that while trial is pending in 276 cases, investigation is yet to be completed in 213 cases. 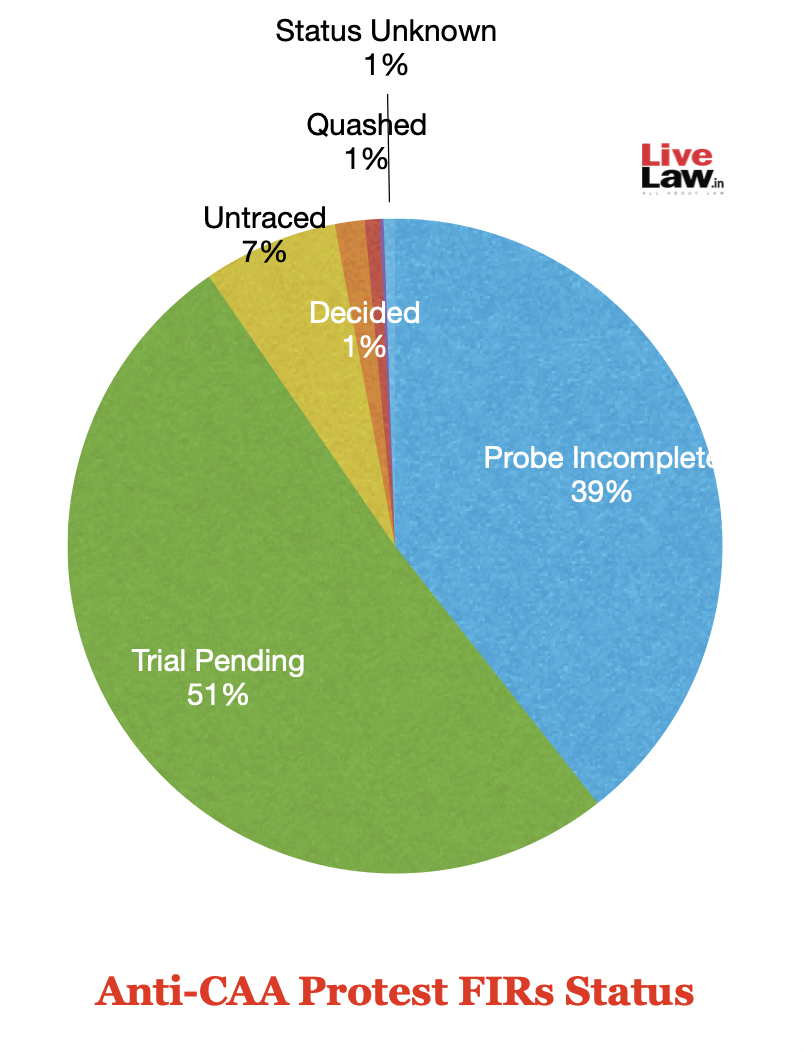 The High Court had issued notice in the PIL in March this year, thereby seeking responses from Ministry of Home Affairs, Delhi Government and Delhi Police.

Filed by an advocate and a law student, the PIL claimed that they personally visited various places in the city and were shocked to see the damages caused to public properties during the riots and the resultant huge loss to the government exchequer.

The PIL prayed that an independent machinery be set up to assess the damage caused and for recovery of the same from identified persons.

Calling the contentions raised in the plea as false and baseless, the Delhi Police in the status report has said the police authorities acted promptly, vigilantly and effectively in a "professional manner" during the riots.

"It is stated that during the entire period of protest against CAA/NRC and blockades of roads by the protestors, Delhi Police remained vigilant and cautious and took all necessary measures to ensure that the protest may not escalate and the protestors may not breach the law and order situation in the area under the grab of exercising the constitutional rights available with them," the police said in the response.

The police has further said that as and when the protestors tried to infringe the law and failed to obey the directions of the law enforcement agencies, appropriate legal action was taken against them.

"Due to the measures taken by Delhi Police, the violence could be contained in few days and was confined to a limited area. That from the start of violence in the area to till date, 758 cases have been registered. The investigation of these cases is being carried out in a professional and scientific manner under monitoring of senior officers," the status report reads.

Delhi Police has also informed the court that retired Justice Sunil Gaur has been appointed as "Claim Commissioner" to investigate the damages and for awarding compensation relating to the riots.

A division bench headed by Chief Justice Satish Chandra Sharma today listed the matter for hearing on January 31, 2023 as the status report was not on record.

In January this year, responding to a batch of PILs related to the Northeast Delhi riots, the Delhi Police had informed the High Court that out of the total 758 FIRs registered in connection with the violence, conspiracy and arson, the investigation was pending in a total of 384 cases.