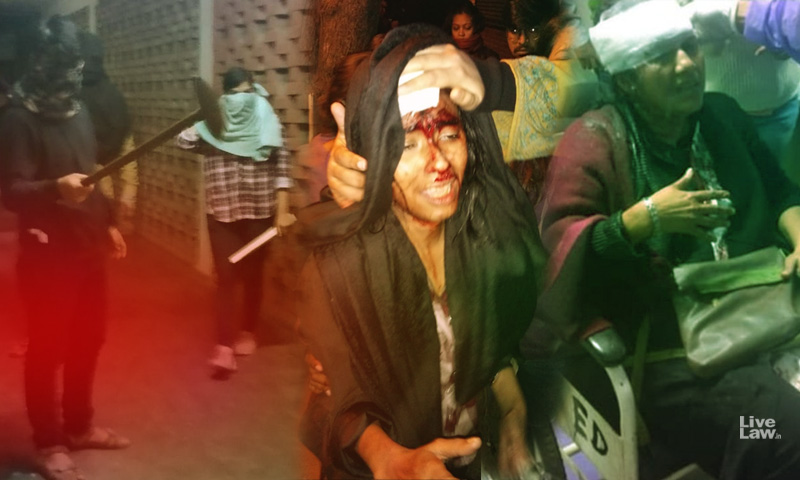 An Application for early hearing has been filed before the Patiala House District Court seeking for an investigation into the violence which took place at Jawaharlal Nehru University on 5th January, 2020. On 5th January, 2020, violence was unleashed at Sabarmati Tea Point in JNU, wherein the Applicant, Sucharita Sen, a Professor at the University, became a hapless victim...

An Application for early hearing has been filed before the Patiala House District Court seeking for an investigation into the violence which took place at Jawaharlal Nehru University on 5th January, 2020.

On 5th January, 2020, violence was unleashed at Sabarmati Tea Point in JNU, wherein the Applicant, Sucharita Sen, a Professor at the University, became a hapless victim and sustained serious injuries which even drew blood from the Applicant's head.

Filed by Advocates Adit S. Pujari, Tara Narula, Kriti Awasthi and Viren Bansal, the early hearing application states that there has been negligible progress in the status of investigation into the 5th January incident and delaying the same can lead to tampering/loss of evidence. Sen had previously approached the district court on 13th January and filed an Application under Section 156(3) of the Code of Criminal Procedure, seeking for directions for registration of FIRs against accused persons under Section 120B, read with Sections 147, 148, 149, 307, 323, 324, 325, 336, 337, 425, 506 of the Indian Penal Code.

On 16th January, the Court directed the investigative agency to file an Action Taken Report and the matter was adjourned to 23rd March. Till 20th February, no intimation had been made to the Applicant for participation in the investigation. After 45 days of the incident, three members finally visited the Applicant at home to inquire about the same.

It is averred in the Application that since then, there has been no further information regarding the status of the investigation; no Report as mandated under Section 157(2) of CrPC has been placed before the Court as well. Additionally, due to the ensuing COVID-19 pandemic threat, the matter was initially adjourned to 25th April, and now has been further adjourned to 18th June.

The Application notes that that with regard to the 2020 Delhi Riots, the Delhi Police, Crime Branch is "actively investigating other cases, conducting forensic research to establish presence of persons at the spot and involvement of other persons by seizing phones and anaylsis of data". Therefore, the investigative agency is admittedly and demonstrably capable of carrying out the investigation. Furthermore, in its Order dated 14th Jan, 2020, the Delhi High Court had directed that the case needs to be "probed thoroughly and expeditiously so that such kind of incidents are not repeated in future".

The Application also invokes the landmark judgement of Lalita Kumari v. Govt. of UP (2014), wherein a 5-judge Constitution Bench of the Supreme Court emphasized the importance of mandatory and immediate registration of an FIR when information of commission of cognizable offences is received.

The grounds of urgency that have been averred in the Application are as follows:

1. Directions of the Delhi High Court in its Order dated 14th January, 2020.
2. Ability of the investigative agency to analyze digital data and to forensically establish locations of persons.
3. Easy availability of persons (either accused or witnesses) on account of nationwide lockdown.

4. Evidence is in the nature of data and can be tampered with/lost.
5. There has been negligible headway into the investigation, despite 4 months having elapsed since the incident.

To that end, the Application concludes with:

"That the nature of the offences committed by the accused persons on 05.01.2020 in JNU Campus are very serious and include offences that are cognizable and non-bailable in nature, and necessary directions to the investigating agency are being sought by way of the captioned Complaint Case to register an FIR and to further investigate the complaint of the Applicant fairly, properly and impartially".