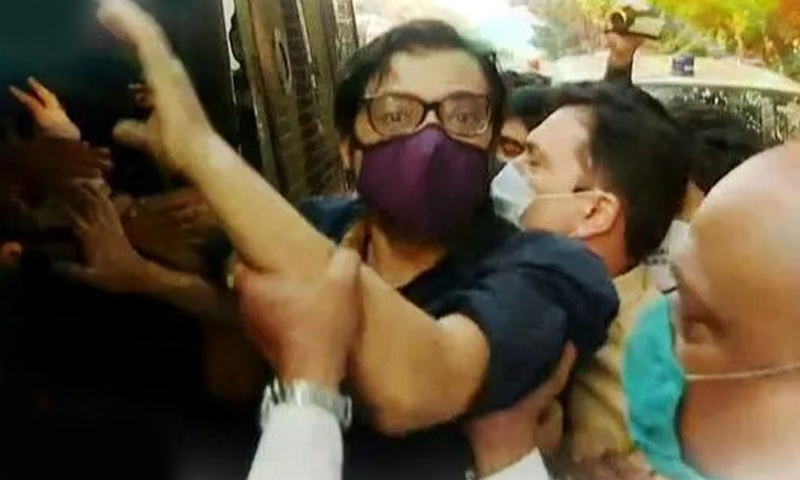 Acharya has filed the complaint against Mumbai Police & Raigad Police for "unjustly and illegally manhandling, assaulting and arresting Mr. Arnab Goswami from his residence in Mumbai".

Acharya has called the arrest, a "blatant and brazenly illegitimate action" under Section 306 and 506 of the Indian Penal Code 1856 with regard to a suicide case registered and closed in 2018.

Detailing the incident to the NHRC, Acharya has placed it under the category of "Atrocities on Media Persons" stating that the Police barged into Goswami's house today and "dragged him" in which is "derogation of all fundamental human right".

The complaint states that Goswami is is one of the prominent journalists' of the country and his arrest is a "mala-fide act at the behest of State Executive coupled with vengeance and vendetta because of his news reporting exposing infirmities and inefficiency of the State Government and Mumbai Police".

Acharya has stated that the police misbehaved with Goswami and his family, including with his elderly parents & also beat his minor son.

"He was refused access to legal assistance by his lawyers. Raigad Police has arrested, pulled and paraded Mr Goswami out of his residence, treating him like a hardened criminal, without a shred of evidence, which shows a clear malevolent attempt to irreversibly damage his professional reputation, personal dignity..."            -   Complaint states

It is further stated that by doing this Act, Mumbai Police tried to give a message to entire community of journalists that the same would be the fate of any journalist who will dare to report anything against Mumbai Police and State Government.

This, Acharya states is not only a blatant attack on the fundamental right of a citizen but overall a intimidation to the fourth pillar of our democracy and independent journalism.

"The attack on the Fourth Estate without any evidence or verifiable facts, on the basis of closed case being reopened with the sole aim to make an unwarranted illegitimate arrest of Mr Goswami is extremely shocking to the point that it shakes India's belief in good governance and policing," Acharya states.

The Complaint has further stated that the entire episode since the morning of 04.11.2020 is shocking for the whole country as it gives a signal to entire population of country to dare not speak against the ruling government of Maharashtra.

"It has also been live broadcasted on the television that how in blatant disregard of Cr.PC and various laws laid down by the Hon'ble Supreme Court on the manner and method of arrest a person in the country"

In this light, Acharya has urged the NHRC to take cognizance of this matter and call for response from the Mumbai Police about their "illegitimate manner of operation in derogation of human right of a top journalist of the Country". Additionally, Acharya has sought imposition of an extraordinary fine on the Officers involved in this brazen act to reprimand all other State Police forces to have respect for human rights and due process of law.

The Advocate has also written to Chief Justice SA Bobde requesting him to take suo-motu cognisance of the issue.

Calling Arnab's arrest 'political vendetta', the Supreme Court lawyer has asserted in his letter that state power was being abused by the current Maharashtra government to 'settle personal scores', adding that even the basic process of law was not followed during Arnab's arrest.

"The illegal arrest stinks of pure political vendetta and is in clear violation of law. This is evident from the fact that Arnab was neither served prior summons nor allowed access to his legal team. Due process of law has not been followed while making the arrest. This is a direct and unprecedented attack on the Freedom of Speech and Expression and on Freedom of Press by Maharashtra Government misusing Mumbai Police," read Siddhart Acharya's letter to the CJI.