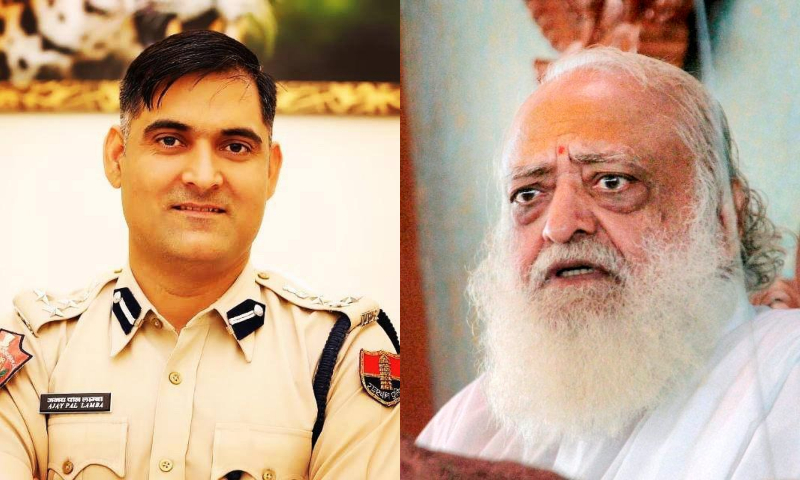 The Rajasthan High Court recently issued an order to summon Additional Commissioner of Police, Jaipur, Rajasthan, Ajay Pal Lamba for recording his evidence as a court witness in connection with Asaram's appeal challenging his conviction by lower Court in a minor's rape case.The Bench of Justice Sandeep Mehta and Justice Vinod Kumar Bharwani issued the order while allowing...

The Rajasthan High Court recently issued an order to summon Additional Commissioner of Police, Jaipur, Rajasthan, Ajay Pal Lamba for recording his evidence as a court witness in connection with Asaram's appeal challenging his conviction by lower Court in a minor's rape case.

The Bench of Justice Sandeep Mehta and Justice Vinod Kumar Bharwani issued the order while allowing an application filed by Asaram under Section 391 CrPC [Appellate Court's power to take further evidence or direct it to be taken] to summon Senior IPS Officer Lamba as a court witness and to record his evidence, based on certain excerpts of the book co-authored by Lamba.

Asaram is currently undergoing imprisonment at the Central Jail, Jodhpur following his conviction under sections 370(4), 342, 506, 376(2)(f) and 376D of the Indian Penal Code by the Special Judge, POCSO Act Cases, Jodhpur in the 2013 case.

Essentially, Asaram's appeal against his conviction is presently pending in the High Court wherein he has contended that the entire prosecution case is false and fabricated. Meanwhile, he moved an application to summon Mr. Lamba.

In his application, Asaram primarily submitted that the victim was tutored on the basis of some videography done by Mr. Lamba, a description of which has been mentioned in a book titled Gunning For The Godman, The True Story Behind Asaram Bapu's Conviction, which has been co-authored by Mr. Lamba.

To support his claim, the Counsel for Asaram submitted that there was no mention of the alleged scene of crime/kutiya, neither in the victim's handwritten complaint nor in her statement, however, after she was shown a video recorded by Ajay Pal Lamba [the then DCP (West), Jodhpur] on August 20, 2013, the victim, in her police statement recorded on August 21, 2013, for the first time, gave a detailed description of the Kutia.

Against this backdrop, a prayer had been made in Asaram's application to summon Mr. Lamba so that he could be cross-examined by the defence as well as the prosecution.

Lastly, it was contended that till the publication of the book, the defence had no idea regarding the video recorded by the DCP Shri Ajay Pal Lamba, however, no sooner, the book was published in 2020 and came out in the market, this important fact came to light whereupon, the instant application has been preferred.

At the outset, the Court observed it would be premature for it to comment that for describing the crime scene, the victim was tutored on the basis of some videography.

Further, the Court opined that it was absolutely unwarranted for Mr. Lamba to have published the book while the matter was still pending consideration at the stage of appeal and that it may be viewed as an attempt to influence the Judicial proceedings.

However, further stressing that since the cat is out of the bag and the book has been published, the Court, while allowing the plea, observed thus:

"The video would definitely be a valuable piece of evidence because it was recorded during the first visit by a police officer to the crime scene. Shri Lamba was not examined in evidence at the trial...Now with the publication of the book, referred to supra, the defence has the right to claim that video of the crime scene was unquestionably recorded which fact is sufficient to convince the Court that it is absolutely essential in the interest of justice and for a just decision of the case to exercise the power under Section 391 Cr.P.C. for summoning and examining Shri Ajay Pal Lamba as a court witness in this case while giving access of cross-examination to the defence as well as the prosecution."