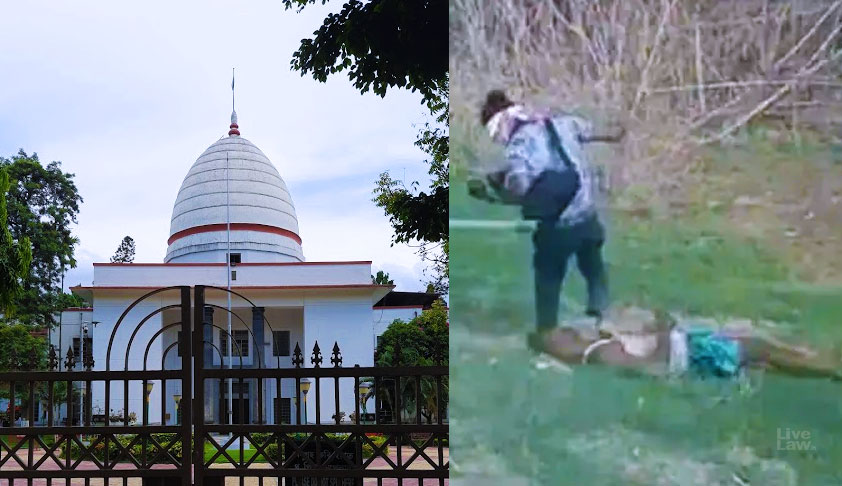 Hearing a plea filed regarding the ongoing eviction drive in the state of Assam and the September 23 Dholpur killing in which two civilians were killed and nearly 20 others were injured, the Gauhati High Court granted three weeks' time to State Government to file its reply and listed the matter for November 3.The Bench of Chief Justice Sudhanshu Dhulia and Justice Soumitra Saikia...

Hearing a plea filed regarding the ongoing eviction drive in the state of Assam and the September 23 Dholpur killing in which two civilians were killed and nearly 20 others were injured, the Gauhati High Court granted three weeks' time to State Government to file its reply and listed the matter for November 3.

The Bench of Chief Justice Sudhanshu Dhulia and Justice Soumitra Saikia was hearing the plea filed by the leader of Opposition in the Assam Assembly, Debabrata Saikia, against the Assam Government's "forced eviction".

A video of the 23 September incident had surfaced on social media, in which a photographer, Bijoy Bonia could be seen stomping violently on the body of a man lying on the ground.

The PIL refers to at least five instances of eviction drive taken up by the Government, besides the recent Dholpur eviction drive, during which, the plea alleges, violation of human rights took place.

The PIL seeks that consultation with the evicted persons be done, and thereafter, schemes for their rehabilitation, resettlement, and compensation in a time-bound manner be taken up by the State Government.

Senior Advocate Chander Uday Singh appearing for the petitioner submitted that none of the abovementioned measures have been taken up by the State Government to ensure "mandatory Social impact assessment" in cases of such people who are sought to be evicted.

He also sought court's intervention to ensure that the principles of the Right to Fair Compensation and Transparency in Land Acquisition, Rehabilitation and Resettlement Act, 2013 are implemented with regard to such people.

The petitioner, in his plea, argues that the occupants at Sipajhar hail from marginalized and socioeconomically disadvantaged sections and they were forced to migrate due to repeated floods and erosion in around 1960.

The plea further challenges the State Government's cabinet decision to effectuate proposal to clearing around 75,000 bighas of land to set up an Agro farm/forest. The plea contends that the decision is arbitrary, violative of Articles 14 and 21, violative of Parts IX and IX-A of the Constitution which requires democratization of economic and social planning, in contravention of the Panchayat Act, 1994.

At the outset, the Advocate General submitted that during the September 23 eviction drive, the Government's plan was to evict around 125 families residing on government land for decades, however, stone pelting from the other side, and due to this, various policemen got injured and they are presently admitted in the Hospital.

The Advocate General also submitted that there should have been hardly 500-600 people, but there were 20,000 people, mostly outsiders and with doubtful antecedents, who attacked the policemen. He also argued that the local people were agreeing to the eviction drive, but it is because of some outsiders, the disturbance is being created.

It was also contended that since the petitioner is a leader of opposition in the state assembly (a Congressman), the Court shouldn't allow any political battle in the Court.

"If they want to fight a political battle, let them fight it outside the Court", submitted the Advocate-General as he clarified that Dholpur village 1,2 & 3 (District of Darrang) has already been cleared in the eviction drive.

Thereafter, appearing for the PIL petitioner, Senior Advocate Singh submitted that he sought compensation for the evicted people and an inquiry into the Killing by the police as per Section 176 CrPC.

To this, Chief Justice Dhulia observed that since the Dholpur incident was not a case of custodial death and that they (State Government) have already appointed a judicial commission to probe the matter under a retired HC Judge, what else does the petitioner need.

"It was an unfortunate incident, it is a tragedy. We will ask for a detailed affidavit from the State. The issue is 3 lives lost. Khun Jameen par gir gaya (खून जमीन पर गिर गया/ the blood fell to the ground). Regarding your point that a political person has filed the plea, we can't stop them, there is no issue with that."

Further, the AG for state sought to argue that the situation in Assam is quite different from the rest of the country and that the ground reality is something different. He also contended that the land is quite a fertile land where these people (alleged encroachers) are living and the land is a part of the Government's agriculture project and that it wants to make it a forest area.

Importantly, AG argued that the question was, as to whether, as a government, our land can be allowed to be encroached or not. He also asked in the court as to what wrong did the Government do (to evict people)?

"60% of people who are being evicted are not in the NRC List," he argued.

In response to this, calling the AG's statement as 'surprising', Senior Adv. Chander U. Singh said that the NRC list has not been published by the Government and still AG argues that 60% of people being evicted don't have their names in the NRC list.

Lastly, granting three weeks' time to the state to file a counter, the Court listed the matter for 3rd November and further recorded that the State Government would serve eviction notices only after the Durga Puja Vacations.

Interim relied to be considered on the next date of hearing.