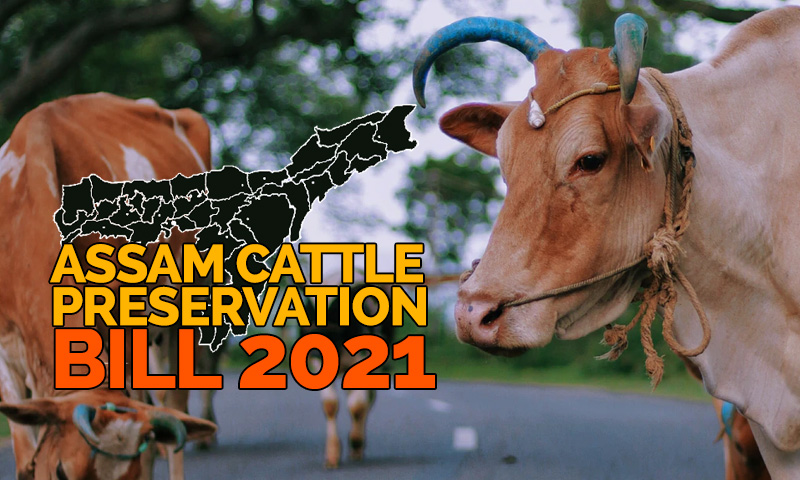 The Assam Legislative Assembly today passed the 'Assam Cattle Preservation Bill, 2021' (which replaces the existing Assam Cattle Preservation Act, 1950) amid absolute bedlam in the House as the opposition staged a walkout as their demand to send the bill to a select committee was not met.As per the provisions of this Bill, which proposes to "regulate slaughter, consumption &...

As per the provisions of this Bill, which proposes to "regulate slaughter, consumption & transportation of cattle", the Cows would be allowed to be slaughtered only with Government's prior permission and that too, only in licenced slaughterhouses.

The Bill also proposes to ban beef sale within a five-kilometre radius of temples, xatras, or areas where non-beef eating communities have a majority. Also, Cows younger than 14 years and calves can't be slaughtered.

The proposed law also prohibits the interstate transport of cattle to and from, as well as through Assam without valid documents. Unlike anti-slaughter laws already in place in the states of Rajasthan and Madhya Pradesh which include only cow progeny and not buffaloes, this bill does not distinguish between cattle types.

The Statement and objective of the Bill reads: "…it has been observed over the years that the (Assam Cattle Preservation Act, 1950) lacks sufficient legal provisions to deal with the issues arising out of slaughter, consumption and transportation of cattle."

Prohibition on the transport of cattle [Section 7]

This particular provision states that no person shall transport or offer for transport or cause to be transported any cattle, without a valid permit from-

It says that no person shall directly or indirectly sale or offer or expose for sale or buy beef or beef products in and form which are predominantly inhabited by Hindu, Jain, Sikh, and other non-beef eating communities or within a radius of 5 km of any temple, satra, or other religious institutions belonging to Hindu Religion.

This provision grants any police officer or any other person authorized by the State government the power to "enter and inspect any premises" within their jurisdiction if they have a "reason to believe that an offence under the said Act/Bill has been or is likely to be committed."

The Bill proposes jail term for anyone found guilty of contravening the provision of the Bill for a minimum of three years (extendable up to eight years) and fined Rs 3 lakh (with the upper limit Rs 5 lakh), or both. For repeat offenders, the punishment will be doubled.

This section provides that if any officer, not below the rank of SP, has a reason to believe that there an offence has been committed under this Bill by a person and against whom a warrant has been issued is absconding such arrest, then the photographs of such person with names will be published at prominent places across the locality.

Section 20 of the Bill gives the liberty to the State Government to establish, or direct any local authority or permit society registered under the Societies Recognition Act, 1960, or any Central Act or any association or organization to establish an institution including Gaushalas at such places as may be deemed necessary for taking care of the cattle to be housed thereto