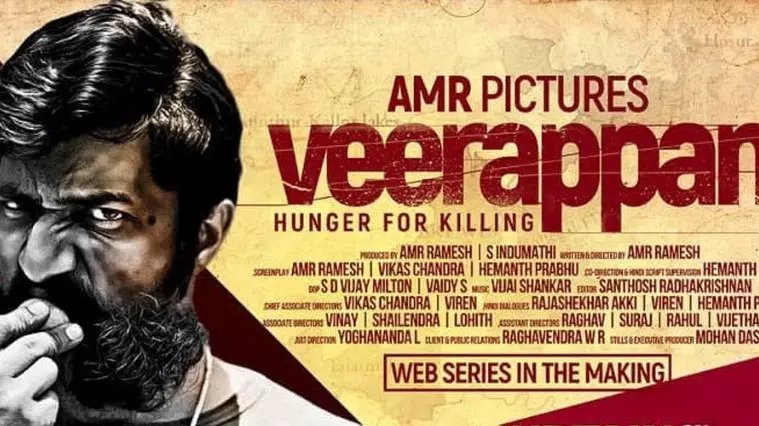 Observing that 'Right of privacy of the plaintiff is to be protected," a civil court in Bengaluru, restrained M/s AMR Pictures, in any manner from exhibiting, screening or releasing on Youtube, Amazon, Netflix, facebook or any other social media platform or OTT platform a films titled 'Veerappan-Hunger for killing'.

The ex-parte temporary injunction order was passed on January 8, by the 4th Addl. City Civil & Sessions Judge, in Bengaluru.The direction was passed on the suit filed by V Muthulakshmi, wife of the deceased bandit M Veerappan.

Advocate H V Praveen Gowda, appearing for the plaintiff submitted that that defendants are going to exhibit the movie "Veerappan, Hunger For Killing" portraying the life of M Veerappan as a villain, based on false and fabricated story and it will result in violation of right of privacy and infringement of on private life. It was pointed that the portrayal of late Veerappan will add sense of shame to the plaintiff 's family which will injure the right to life, liberty and dignity of the plaintiff and her family members. Further, it was said that the release of the film would amount to violation of the Copyright Act.

Following which the court said "No reason is made out to disbelieve the assertions of the plaintiff. The court feels that the right of privacy of the plaintiff is to be protected. Issuance of notice will defeat the purpose by the delay. The Plaintiff will be put to hardship if Temporary Injunction as prayed is not granted."

The court then went on to order ex-parte Temporary Injunction as prayed in I.A.No.1 is granted till the next date of hearing. The matter will be next heard on February 6.