Bail Plea to be Heard by the Same Judge, Who Part-heard The Matter: Bineesh Kodiyeri Urges Karnataka High Court in Money Laundering Case 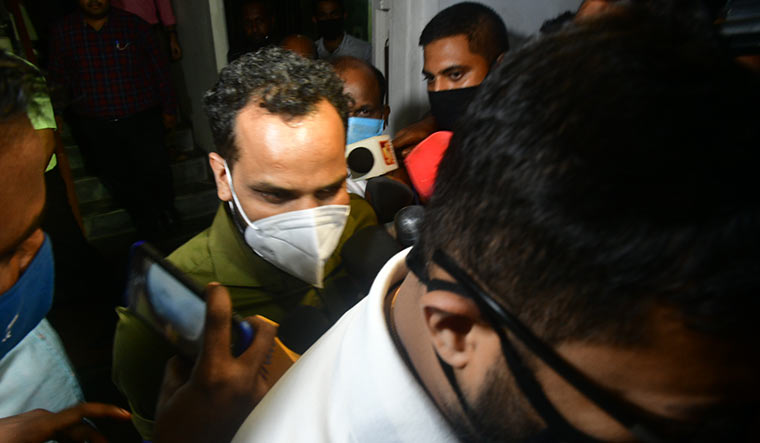 Justice Mohammed Nawaz from today onwards is sitting at the Kalaburagi bench of the High Court, after a change in roster. Therefore, the case was listed before Justice M G Uma, at the Principal bench in Bengaluru.

Today, when the matter was taken up for hearing Krishnakumar submitted;

"I want to make a preliminary submission before the court. This matter was argued at some length before Justice Mohammed Nawaz. I have completed my submissions and the prosecution was arguing and they were halfway through their submissions when this change of roster came in place. I would request if it would be appropriate if the matter would go before the same judge."

Justice Uma accordingly in her order said "Counsel for petitioner submitted that he had already completed his arguments before Honourable Justice Mohammed Nawaz and requested to pray for the matter to be placed before him in the interest of justice. Registry is directed to place the matter before honourable Chief Justice for necessary directions."

Bineesh was arrested by the Enforcement Directorate on October 29, 2020, and since then has been in custody. He moved the high court on March 12, seeking bail. On April 5, Justice K Natarajan before whom the application was then listed had issued notice to the respondent and directed to file a statement of objections and get instructions within one week. On April 15, special counsel for ED, P. Prasanna Kumar, accepted notice for the respondent. On the request of the respondent's counsel, the matter came to be listed on 20.4.2021.

On April 20, the court heard arguments of Senior Advocate Krishnan Venugopal, along with Senior Advocate Guru Krishna Kumar appearing for the petitioner through video conferencing in-part. On that date counsel for the respondent informed the court that Additional Solicitor General S.V. Raju, will argue the matter as he is engaged in some other Court. Hence, the case was adjourned to April 22.

On April 22, the court in its order noted "Though this matter is heard in-part, but due to paucity of time and the upcoming vacation, the matter could not be heard fully. Hence, released from part-heard. However, the petitioner is at liberty to move the Vacation Bench preferably before the first Bench."

On May 5, the matter came to be listed before the vacation bench of Justice S R Kirshna Kumar, who directed the matter to be listed on the top of the list on May 12. On that day the matter was posted for hearing before Justice Mohammed Nawaz who in his order recorded "A detailed hearing is required. There is paucity of time. At request of the learned counsel for petitioner, list this petition on 19.05.2021, at the top of the list."

On May 19, it was listed for hearing before Justice P B Bajanthri who heard the matter for sometime and directed the counsel for petitioner to place on record documents to the extent that all those deposits in the petitioner's bank account are not by accused No.1-Mohammed Anoop. The court directed the counsel to submit the material by next date of hearing May 24. On May 25, the matter was again listed before Justice Nawaz who posted the matter for further hearing on June 30.

Senior Advocate Guru Krishnakumar submitted that the proceeding cannot be sustained because the Narcotics Control Bureau (NCB) has not found the petitioner to be involved in the illegal drug trade in any manner after thorough investigation.

Further he had submitted "Today the investigation has been completed and the charge sheet has been filed. There is no question of tampering with that, they have had my full custody. The Witnesses named are official witnesses and private persons. The questions of tampering cannot arise." The court then posted the matter for further on July 5 Guru Krishnakumar continued his submissions and the matter was again heard on July 8, on the date he concluded his submissions.

As time was sought on behalf of the Additional Solicitor General Aman Lekhi appearing for the respondents for making his submission, the court posted the matter for hearing on July 14.

ASG Lekhi appeared through video conferencing on 14th and commenced his submission. The matter was then posted for further hearing on July 19. However, on that day the court orally informed the parties that the roster was to change next week and thus the matter should be placed before the next bench which will be assigned to hear the matters. It accordingly adjourned the case to July 26 coming up for hearing before Justice Uma