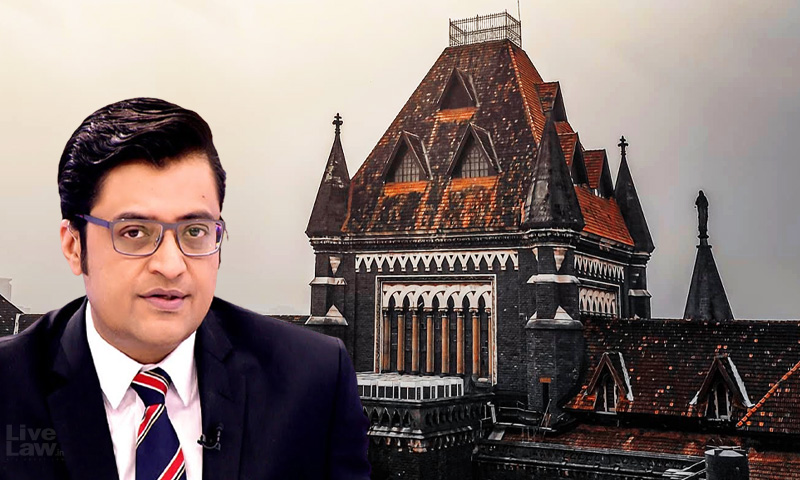 The Maharashtra Government once again assured the Bombay High Court on Friday that it would not take any coercive steps against news anchor Arnab Goswami and other employees of ARG Outlier Media, which runs Republic TV, in the TRP Scam case, till February 12. Interim relief has been extended following this statement. The division bench will now hear writ petitions filed by ARG...

The Maharashtra Government once again assured the Bombay High Court on Friday that it would not take any coercive steps against news anchor Arnab Goswami and other employees of ARG Outlier Media, which runs Republic TV, in the TRP Scam case, till February 12.

Interim relief has been extended following this statement. The division bench will now hear writ petitions filed by ARG Outlier Media Pvt Ltd challenging the investigation of Mumbai police in the case related to rigging of TRP ratings by private news channels, on February 12.

The bench of justices SS Shinde and Minish Pitale adjourned the case to enable the petitioners to file their rejoinder affidavit (further reply) to Mumbai Police's reply. The Mumbai Police has filed two charge sheets in the case, so far, and submitted their reply to the petitions, on Monday.

In the last hearing, Senior Advocates Kapil Sibal and Harish Salve exchanged words over the presence of the Enforcement Directorate(ED), after ARG Outlier filed an application seeking for ED to be made a party to the proceedings. Salve alleged that if ED's findings were different from Mumbai Police, it would be clear that the police was working with malafide intention.

During the hearing on Friday, via video conferencing, the Court expressed its anguish at the bulk of the documents being submitted. "The total number of pages are roughly around 8000… even yesterday another application was filed, why aren't things being filed in advance?" Justice Shinde said.

Advocate Niranjan Mundargi appearing on behalf ARG Outlier said that the Mumbai Police's reply was filed late. Advocate Malvika Trivedi, also for the petitioners, submitted that everything can streamlined by filing a rejoinder.

"This is being converted into a trial. This is a proceeding under 226. How can the accused be filing more documents?" Senior Advocate Kapil Sibal for the Mumbai Police said.

Trivedi then sought for interim protection to her clients to be continued till the next fixed date. "Of course," Sibal responded, "my learned friend always smiles because I always say yes to that."

Trivedi informed the court that they will be filing an amendment to their petition challenging the chargesheet. "There is so much of material that milords may fix a date which is convenient to everyone and everyone will abide by that", she submitted.

Mundargi suggested the case be adjourned to February 26. However, Sibal said that the date was too far, and he would not continue his statement that the investigation will remain stalled till then. "I would prefer February 12," he added.

Trivedi said that February 12 would be difficult as they are now required to respond to the charge sheet. Sibal responded that this was not a trial that would require responding.

Justice Shinde, however, said the petition was for quashing of the FIR but since the chargesheet it filed it may need to be considered. "We will be quoting judgments with respect to a court's power in such cases. If any impeachable document is brought before the court, we will have to consider."

"We will have to examine whether sufficient material has been collected for the prosecution to proceed with the case," Justice Shinde, added.

Sibal argued that the documents would need to be considered at the stage of framing of charges. The Court then adjourned the case to February 12.

Complainant in the TRP scam case -HANSA RESEARCH GROUP PVT LTD's petition for CBI probe into the matter has been separated from the above clutch of petitions and adjourned to February 26.

The TRP Scam FIR was registered by the Mumbai police in October last year.

In November, the Mumbai Police Crime Branch filed a 1,400-page chargesheet in the case, naming six channels, including those of Republic Media Network and News Nation, as allegedly paying money to boost TRPs for around two years.

The company running Republic TV channels and Goswami moved the High Court seeking to restrain coercive action by Mumbai police and handing over of the investigation to the CBI.