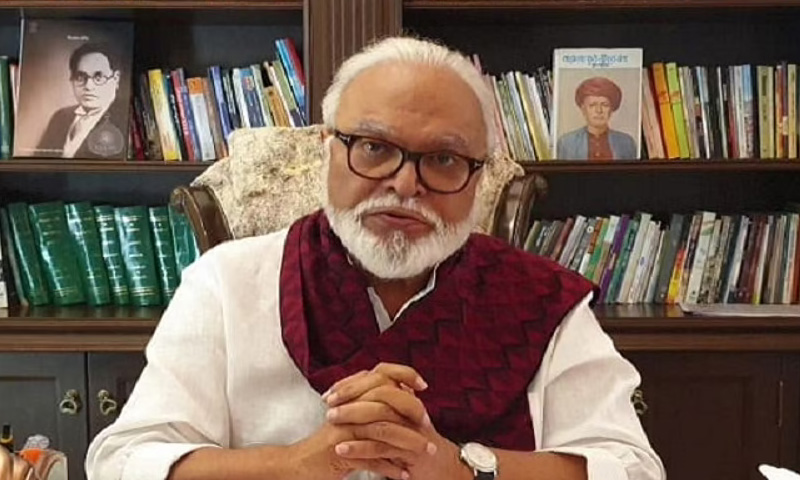 The Bombay High Court has rejected a petition filed by Maharashtra Cabinet Minister Chhagan Bhujbal challenging a show cause notice issued by the Income Tax department.In a judgment passed earlier this month, a division bench of Justices K R Shriram and A B Borkar observed that they did not see any reason to exercise their extraordinary jurisdiction under Article 226 of the Constitution of...

The Bombay High Court has rejected a petition filed by Maharashtra Cabinet Minister Chhagan Bhujbal challenging a show cause notice issued by the Income Tax department.

In a judgment passed earlier this month, a division bench of Justices K R Shriram and A B Borkar observed that they did not see any reason to exercise their extraordinary jurisdiction under Article 226 of the Constitution of India and prohibit the authority from proceeding further in the matter.
Bhujbal's petition challenged a notice issued to him by the Assessing Officer on March 31, 2019 issued under Section 148 of the Income Tax Act, 1961 (the Act). The notice stated that there were "reasons to believe that income chargeable to tax for the A.Y. 2012-13 assessment year) has escaped assessment within the meaning of Section 147 of the Act."
Interestingly, the escaping of income, as alleged by the IT department, pertains to his dealings with two construction companies – one connected to New Delhi's Maharashtra Sadan scam and the other to the Mumbai University library scam case. According to the allegations in those cases Bhujbal allegedly favoured the construction companies and had illegal dealings. Accused connected to the construction company in the Maharashtra Sadan scam case have since been discharged.
The March 2019 notice stated that the assessing officer had reasons to believe that income chargeable to tax for the A.Y. 2012-13 has escaped assessment within the meaning of Section 147 of the Act. Bhujbal then sought more details from the department, which was provided to him in September 2019. The communication said, "The suspect person have defrauded the Maharashtra Government by preparing fabricated/bogus documents and used them as genuine documents. The accused persons especially the public servants by misusing their designation under criminal conspiracy committed acts like to cheat government and to cause financial loss and to gain the developer M/s. K.S. Chamankar Enterprises". It also mentioned that Bhujbal, in a criminal conspiracy, misrepresented facts to the Government and dishonestly got the plot for the building of State Central Library on BOT basis allocated to M/s India Bull Real Tech Limited.
Thereafter, another notice was issued in December 2019 which specified the amount and asked, "Why the amount of Rs.3,13,00,000 being transaction effected on 10th May, 2011 and 1st October, 2011 in a particular bank account between two parties should not be added to the income under Section 69A of the Act being unexplained money."
Bhujbal's legal team argued before the court that he had raised objections to the first notice in October 2019, which was rejected by the department. It was also submitted that as per the timings mentioned in the first notice, the information was received by the department at 5.47 pm on March 31, 2019 and a notice was issued the same night around 10.49 pm. "How could the authority which has granted the sanction by issuance of notice could be said to have applied his mind to the proposal put up before him for approval," it was argued.
Other submissions against the notice were – not mentioning the reasons for issuance of the notice, not indicating the amount of income which had escaped assessment and that Bhujbal had raised an objection with the department in October 2019, which was rejected.
The IT department countered the submissions by saying that Bhujbal never had any problem when he received the first notice or when he received the reasons for re-opening or when the objections filed were rejected by an order in October, 2019. It was further argued that even if the objections were rejected, Bhujbal participated in the assessment proceedings and made submissions and filed documents in November in compliance with the notice.
"But petitioner suddenly woke up and decided to challenge the notice issued under Section 148 of the Act itself when petitioner received Show Cause Notice dated 11th December, 2019 as to why the amount of Rs.3,13,00,000/- should not be added to the income under Section 69A of the Act. Having participated in the assessment proceedings, petitioner at this stage cannot challenge the notice," it was argued.
The court observed that the test to be applied to the case was whether there was reason to believe that income had escaped assessment and whether the Assessing Officer had tangible material before him for the formation of that belief. The court ruled that in this case, the reasons indeed disclose what is that tangible material and "once tangible basis had been disclosed for re-opening the assessment, it would not be appropriate for the court to prevent an enquiry whatsoever by the Assessing Officer."
On the fact that the time taken to issue a notice from the time the information was received was just about five hours, the bench observed, "In the case at hand, there is nothing to indicate that there was non-application of mind. Merely because information was received at 5.47 p.m. and the notice was issued by 10.49 p.m. would not mean that there has been non-application of mind. If we hold that it would be merely speculative and based on conjecture."
The bench also agreed with the IT department's submissions that once Bhujbal had participated in the assessment proceedings, it would not be open for him to now contend that the court should exercise its extraordinary jurisdiction and prohibit the authorities in proceeding further with the impugned notice, and dismissed his petition.