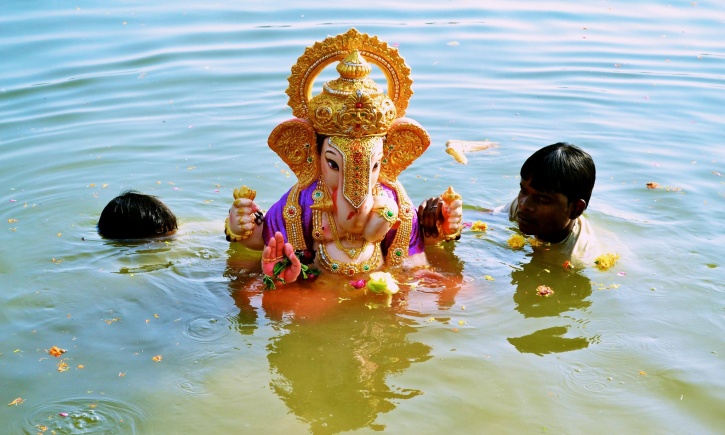 The Bombay High Court on Monday dismissed a PIL challenging the ban on use of Plaster of Paris (POP) for making Ganesh idols.

PIL petitioner Ajay Vaishampayan, an activist, had claimed that PoP was banned without any scientific tests on its effect on water. And Shadu clay idols, used as an alternate option, were more harmful for the environment.

However, a division bench of Chief Justice Dipankar Datta and Justice MS Karnik noted that the Supreme Court had already dismissed an appeal against the National Green Tribunal's order, thereby upholding the ban.

Therefore, the bench couldn't consider the petition for reliefs.

In January 2021, the petitioner along with a sculptor organisation approached the High Court challenging the revised guidelines for idol immersion by the Central Pollution Control Board in 2020. This included the ban on PoP.

The High Court, however, directed them to seek relief from the NGT that dismissed the petition stating that it was not maintainable. The NGT also held that while the extent of damage through PoP was not know, it can't be disputed that it was in fact a pollutant.

In November, 2021, the Supreme Court refused to hear an appeal against the NGT order.

In a fresh round of litigation, petitioner Ajay Vaishampayan challenged the guidelines and ban on PoP again. He claimed that the pH level of PoP is similar to that of drinking water on the basis of a laboratory test.

Moreover, mass production of Shadu clay idols for a festival like Ganesh Chathurthi is not possible since clay is not easily available. Mining clay causes soil erosion and as a result of mining, there are lots of pollutants in it, the plea reads.

According to an examination conducted in the laboratory, the petitioner claims he found two prominent constituents in the POP, namely calcium & sulphate in Shadu clay. Additionally 16 constituents in the Shadu clay are heavy metals including Led, Mercury, Arsenic etc. which are all toxic or hazardous content.

"It might be a shock to some," the plea states.

The petition further states that Shadu clay idols cannot retain their shape for a long period and eventually break.

Significantly, banning PoP alienated the weaker section from celebrating these festivals owing to the high cost of the idols, according to the petition.

However, Advocate Pranav Thakur for the Union of India submitted that the NGT has not only dismissed to reverse the PoP ban on the grounds of 'maintainability,' but also duly considered the fact that PoP is a pollutant.

"Even if the extent to which it causes damage may be contested, it's ability to damage aquatic ecosystems cannot be disputed," Thakur said.

He pointed out that the petitioner had previously approached the court, albeit from a different forum. He's approaching the Court for the same reliefs.

Finally the bench said that since a challenge was already rejected by the Supreme Court, it couldn't entertain the plea.