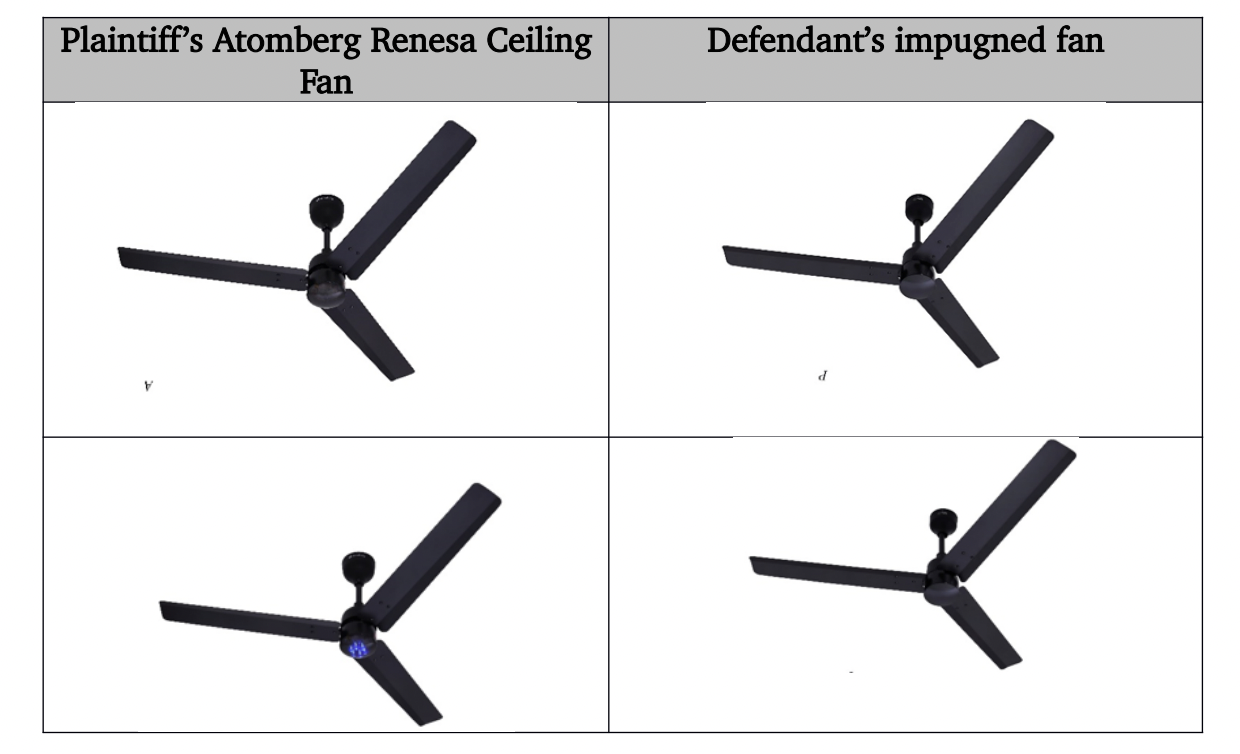 The Bombay High Court recently restrained a leading electrical appliance manufacturer Polycab India Ltd. from marketing its fan in an ex parte order stating that prima facie it has identical design as that of 'Atomberg Renesa Ceiling Fan'. Justice R. I. Chagla granted temporary injunction in favour of the Mumbai based fan manufacturer Atomberg Technologies Pvt. Ltd. in a commercial...

The Bombay High Court recently restrained a leading electrical appliance manufacturer Polycab India Ltd. from marketing its fan in an ex parte order stating that prima facie it has identical design as that of 'Atomberg Renesa Ceiling Fan'.

"Prima facie, it appears that the Defendant has blatantly copied, created a replica and/or reproduced the overall design, shape, configuration, get up of the Plaintiff's Atomberg Renesa Ceiling Fan," said the court.

The court compared Atomberg's  and Polycab's fans and said that visually, the rival goods are nearly identical. The design of Polycab' fab is an imitation of Atomberg's registered design and such an imitation cannot be a matter of coincidence, it said in the order.

"The Defendant must have had the Plaintiff's Atomberg Renesa Ceiling Fan before it while designing the impugned fan," the court added.

It also said traders and public coming across Polycab's fan, which has "deceptively similar" shape, configuration, design and aesthetic appeal as that of Atomberg Renesa Ceiling Fan, are likely to be confused or deceived into believing that fans offered by Polycab are those of Atomberg.

According to Atomberg, it creates original designs for its products. The knowledge, skill and effort of its experts has led to unique design, the court was told.

Atomberg manufactures a ceiling fan named Atomberg Renesa Ceiling Fan which has a unique and novel shape and configuration, the plaint stated. It is registered in Class 23 – 04 having design registration number 309694, according to the suit.

The plaint further stated that the Renesa Ceiling Fan is one of the largest selling fans of the company. Atomberg became aware about the impugned product Polycab Wizzy in August, the court was told.

According to the plaintiff, Polycab's fan is an "obvious imitation" of the design of the Atomberg Renesa Ceiling Fan. The plaintiff before the court presented photos of the fan name Polycab Wizzy/Polycab Wizzy BLDC 1200 MM.

Kamod said that Polycab's imitation is so fraudulent that it is difficult to distinguish between the Renesa Ceiling Fan and the Polycab Wizzy.

He submitted that customers often purchase the Atomberg Renesa Ceiling Fan based on recollection of the design and aesthetic appeal of the fan. Hence, confusion or deception is most likely to occur due to overall visual similarities, it was argued. This amounts to passing off of Polycab's fan and business as that of Atomberg and is unfair competition, he contended.

The court said an "overwhelming prima facie infringement" of the plaintiff's registered design and passing off of the product is made out, and that unless the reliefs as prayed for are not granted, the plaintiff will suffer irreparable loss, harm and injury.

The court restrained Polycab from manufacturing, selling, marketing, retailing, exporting, distributing, trading, exhibiting for sale and advertising the fans bearing the shape or design which is identical with or deceptively similar to the products of Atomberg Technologies.

The court on 26 September extended the interim relief till the next date, which is 21 November, 2022.