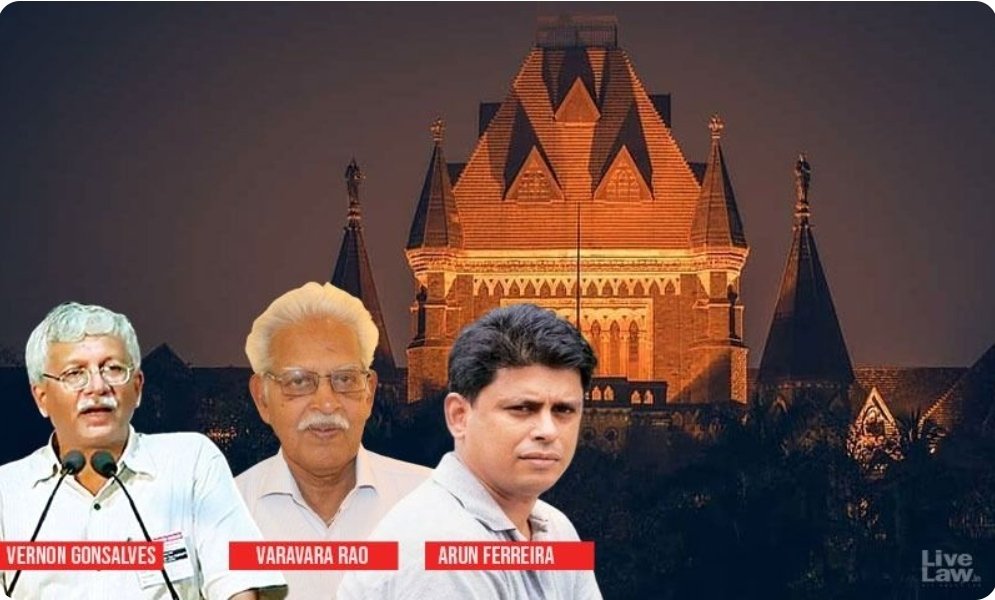 The Bombay High Court has rejected a review application filed by three accused in the Bhima Koregaon – Elgar Parishad Case seeking bail and factual corrections in the order refusing them default bail.

The court disposed of a review application filed by the three, seeking factual corrections in the order refusing them default bail and subsequently release.

A division bench led by Justice SS Shinde and NJ Jamadar had reserved the plea for orders on March 22, 2022. Today, it pronounced the operative portion of the order stating,

"No case for exercise of review jurisdiction is made out. A point which was not urged, is impermissible to be reviewed."

On December 1, 2021, the High Court denied default bail to the petitioners and five of their co-accused on the ground that they had not filed their default bail applications within the stipulated period, which is after 60 days of their arrest and before filing of the charge sheet.

The same bench held that even though the Pune Sessions Judge extended their detention after 60 days without jurisdiction, since he was not a special judge under the NIA Act, they were not entitled to relief. Co-accused Sudha Bharadwaj was, however, granted bail in the same order.

Finally the application states that the High Court has plenary powers to correct such factual errors.

"If such power of correcting its own record is denied to the High Court, when it notices the apparent errors its consequence is that the superior status of the High Court will dwindle down. Therefore, it is only proper to think that the plenary powers of the High Court would include the power of review relating to errors apparent on the face of the record," the accused said in their application.

However, the bench asked them to point out if this was brought to the court's notice when their applications were being heard.

Opposing the application the National Investigating Agency cited the embargo on a bench under Section 362 of CrPC to alter or review judgements once a petition is decided on merits.

Advocate Sandesh Patil for NIA, said that the accused directly wanted the final observation altered, which was made final after due verification of record. "Thus, the applicants/accused persons ought not to crave. any relief that is subjected to judicial proceedings that to be exercised to alter or review the order which expressly barred by the Code of Criminal Procedure," the reply read.

The agency argued that the accused should have approached the Supreme Court in appeal instead of the High Court.

The NIA has accused them of a plot to overthrow the Government and of being members of front organisations of the banned CPI(Maoists).

The agency has accused the activists for furthering the CPI(Maoist) agenda and causing the caste violence at the Bhima Koregaon war memorial on January 1, 2018, through the Elgar Parishad event held a day prior.

However, the arrested activists have said that incriminating material was planted on Gadling and co-accused researcher Rona Wilson's laptop, based on an independent US-based forensic analysis report.

As for Sudhir Dhawale, Rona Wilson, Surendra Gadling, Shoma Sen and Mahesh Raut, they are pursing their default bail pleas filed on September 26, 2018, i.e. 90 days after their arrest on July 6 and before the first charge sheet against them was submitted on November 15, 2018. They have sought for the special court to decide these applications now.