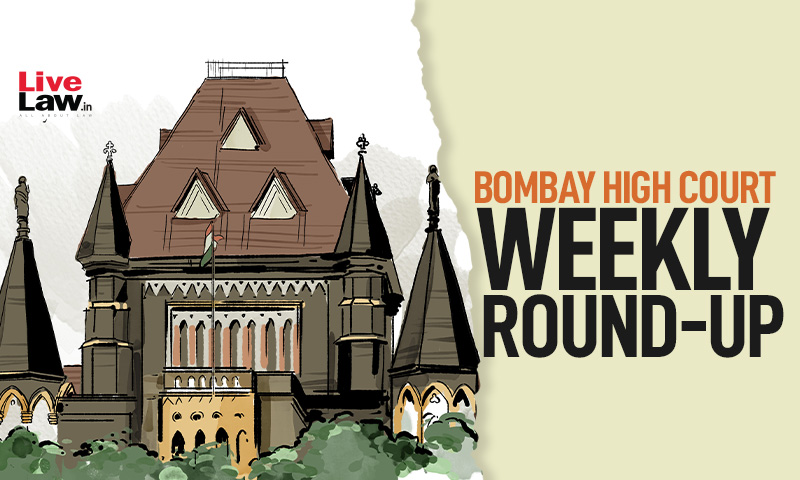 The Bombay High Court held that the court's power to reject a plaint under Order 7 Rule 11 of Civil Procedure Code (CPC) is a drastic power and must be exercised carefully.

Justice Anuja Prabhudessai stated in her order, "The rejection of the plaint under Order VII Rule 11 is a drastic power conferred on the court to terminate the civil action at the threshold. Therefore, the conditions precedent to the exercise of power are stringent".

The Aurangabad bench of Bombay High Court allowed badminton player Prathamesh Kulkarni a wild card entry in an international tournament to be held from August 30 at Pune.

The Bombay High Court held that a disclosure statement made by a co-accused under Section 27 of the Evidence Act is not legal evidence qua a non-maker accused.

The bench of Justice Nijamoddin Jahiroddin Jamadar observed thus while granting bail to one Raju Jokhanprasad Gupta in a case registered against him under Section 307 of IPC [Attempt to murder].

The Bombay High Court reiterated that Customs Authorities cannot encash the Bank Guarantee furnished by the assessee before the expiry of the statutory period available for filing an appeal.

Observing that the CBEC circular no. 984/08/2014-CX dated 16.09.2014 is binding on the Customs Authorities, the Division Bench consisting of Chief Justice Dipankar Datta and Justice M. S. Sonak directed the Commissioner of Customs to ensure that there is no breach of the CBEC instructions or disobedience of judicial orders in the future.

Contract Discharged By Settlement – Dispute Under Contract Is A Deadwood; Cannot Be Referred To Arbitration: Bombay High Court

The Bombay High Court ruled that once a settlement is arrived at by the parties, the contract between the parties stands discharged by mutual agreement and hence, the dispute arising under the said contract is a deadwood which cannot be referred to arbitration.

Observing that a party who conceals or suppresses facts, including the factum of a settlement, is disentitled to relief under Section 11 of the Arbitration and Conciliation Act, 1996 (A&C Act), the Single Bench of Justice G.S. Kulkarni held that a party cannot be allowed to resurrect the dead issues and foist an unwarranted arbitration after the contract between them stood discharged by a complete accord and satisfaction in terms of the settlement agreement arrived between them.

Bombay High Court expressed strong displeasure over an Advocate's conduct trying to get alterations in a judicial order through court staff. Court said that it is "conduct unbecoming" after the Private Secretary (PS) who had taken dictation in court informed that petitioner's advocate had requested to make certain alterations in the order. The court didn't take any strict action against the lawyer but put him on notice that he will face the "full brunt of law" if there is a single instance in the future.

Not Necessary To Refuse Bail In Every Case Of Economic Offence: Bombay High Court On Granting Relief To Vipul Chitalia In PNB Scam Case

The Bombay High Court ruled that bail cannot be refused to an accused merely because the offence is in nature of economic offence.

Justice Bharati Dangre on August 11 granted bail to Vipul Chitalia, former vice president (banking operations) of Gitanjali Group of Companies and observed, "Incarceration of the accused cannot be treated as synonymous with a punishment and assuming that the accused is prima facie guilty for a grave offence, bail cannot be refused in an indirect process of punishing the accused, before he is convicted of the charge framed against him."

Observing that water and power supply are the most basic amenities for habitation, the Bombay High Court cancelled part-Occupation Certificate (OC) granted for a fresh construction in Mumbai for the builder's failure to provide these facilities.

The court said there was an urgent need for policies that protect residents who are forced to move into newly constructed homes without a lift and water connection, and directed the civic body not to issue even part-OC to a building in such case.

Arbitral Tribunal Not Barred Under Section 79 Of The RERA Act From Passing An Order Of Injunction: Bombay High Court

The Bombay High Court ruled that the Arbitral Tribunal is not a Civil Court within the meaning and purview of the Code of Civil Procedure, 1908 and thus, the arbitral proceedings cannot be said to be barred under Section 79 of the Real Estate (Regulation and Development) Act, 2016 (RERA Act).

Rai, who was the driver of prime accused and socialite Indrani Mukerjea was first to be arrested in the case. Subsequently he was declared an approver by the Special CBI court in 2016 and deposed as a prosecution witness. He had written to the court in 2015 saying he wanted to "tell the truth about the Sheena Bora murder case."

Justice G. S. Kulkarni disagreed with the view taken by the Calcutta High Court that a writ petition under Article 227 of the Constitution against an award passed by the Ombudsman would not be maintainable. The court observed, "It thus may not be an acceptable proposition that merely because Sub-Rule (8) of Rule 17 provides that an award shall be binding on the insurer, the insurer would be precluded from assailing the award by invoking the jurisdiction of this Court under Article 227 being a remedy as guaranteed by the Constitution, more particularly, being an adjudication governed by statutory rules as noted above."

The Bombay High Court held that a rape convict's advanced age and regular attendance in court hearings cannot be a reason for a lesser sentence than the minimum punishment under law. The court enhanced the prison sentence of a man who raped his deaf and mute sister-in-law in 2005.

A division bench of Justices AS Gadkari and Milind Jadhav stated, "Once the trial court had come to the conclusion that the prosecution had squarely proved the offence of rape committed by the accused on the victim beyond reasonable doubt, then there is no reason to defer from the statutory provision and award a lesser sentence than what is prescribed by the statute."