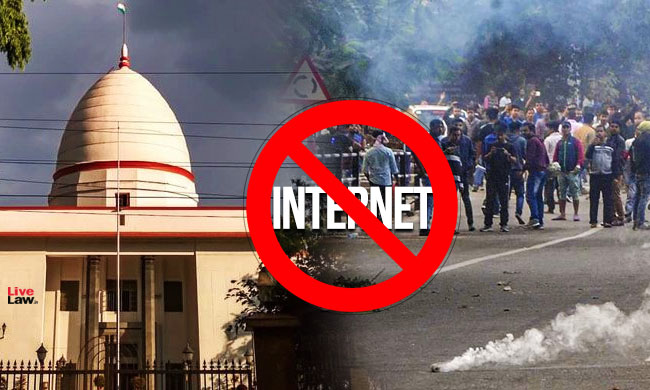 In a significant order, the Gauhati High Court today directed the Assam Government to restore mobile internet services of all mobile service providers from 5 PM today.

The Court has added that it would be open to the State authority to take steps to curb and stop dissemination of "explosive messages, videos on various social media platforms which may have a tendency to incite violence and disruptions affecting public safety on cogent and justifiable grounds and materials"

On Tuesday, the Court had directed the Government to consider relaxing the internet ban from 3 PM of that day. When the case was again posted today for further consideration, the bench observed that the Government had not placed any materials to justify the continuation of the internet ban, which was imposed on December 11 in the wake of anti-Citizenship Amendment Act protests.

"No material has been placed by the State to demonstrate and satisfy this Court that there exists, as on date, disruptions on the life of the citizens of the State with incidents of violence or deteriorating law and order situation which would not permit relaxation of mobile internet services"

The petitioners, represented by Senior Advocates K K Mahanta and A C Borbora and Advocate J Kothari challenged the notifications imposing internet shut down. They contended that no periodic review of the ban was carried out, to ascertain the necessity of its continuation. The petitioners also pointed out that the situation in Assam had been normal during last three days and demonstrations are happening in peaceful manner. It was also pointed out that ban on broadband services was lifted later and hence there was no justification in continuing mobile data services ban.

The petitioners submitted that due to internet shut down even the functioning of the Courts have been disrupted. Advocates are not able to access the causelists. Since digital payment transactions have been disrupted, business establishments are put to a lot of hardship.

The petitioners had also challenged the constitutional validity of the Temporary Suspension of Telecom Services (Public Safety or Public Emergency) Act 2017. The Court however said that at the present stage, it will confine its consideration to the necessity of continuation of internet shutdown.

The Government, represented by Senior Counsel D Saikia, told the Court that shut down was imposed on the basis of an advisory from Intelligence Bureau.  The shut down was necessary in the interests of public safety, the Government submitted.