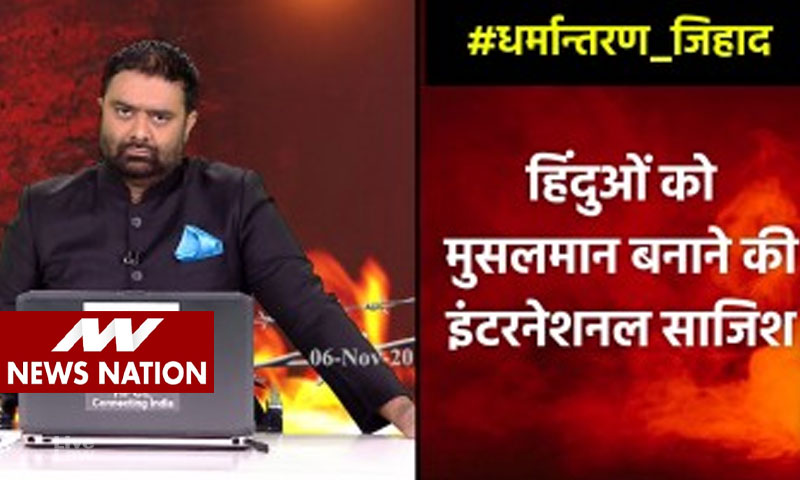 News Broadcasting and Digital Standards Authority (NBDSA), in its order November 15, while referring to a complaint made against News Channel News Nation's November 6, 2020 show title 'Conversion Jihad' called upon the broadcaster to take remedial action against their anchors if they fail to remain impartial during broadcasts.Dealing with a complaint made by Citizens for Justice and...

News Broadcasting and Digital Standards Authority (NBDSA), in its order November 15, while referring to a complaint made against News Channel News Nation's November 6, 2020 show title 'Conversion Jihad' called upon the broadcaster to take remedial action against their anchors if they fail to remain impartial during broadcasts.

Dealing with a complaint made by Citizens for Justice and Peace against News Nation for airing a programme titled 'Conversion Jihad', the NBDSA observed thus:

"There was a need for introspection on part of broadcaster & it should take remedial actions against anchors who fail to remain neutral & impartial during broadcasts. NBDSA also observed that training must be given to the anchors regarding the manner in which they conduct the programs."

However, since the broadcaster issued an unconditional apology, the NBDSA warned News Nation to be careful in future and directed it to remove the video of the show, if still available, from the website of the channel, or Youtube, or any other links, and the same should be confirmed to the NBDSA in writing within seven days.

NBDSA Chairperson Justice (retired) A.K Sikri, observed that whenever any news story is telecast by the broadcaster, the Code of Ethics and Broadcasting Standards, Principles of Self-Regulations, Fundamental Principles and Specific Guidelines Covering Reportage relating Impartiality, Neutrality and Fairness as also the Specific Guidelines Covering Reportage- Guideline No 9 relating to Racial & Religious Harmony, must be adhered to.

The complaint before the NBDSA

A complaint had been lodged with the NBDSA by NGO Citizens for Justice and Peace (CJP) against News Nation wherein it had averred that News Nations's Anchor Deepak Chaurasia called one Maulana Syed ul Qadri and forced him to tender an apology on behalf of the entire Muslim Community and insulted him on-air and called him a Jhoot ki Factory (factory of lies).

The Complaint by CJP said that there was a constant attempt to promote Islamophobic ideas such as the Jamaat misleading and encouraging people to indulge in anti-religious and anti-national activities.

The complaint further said that a few clips from the television show that were uploaded to Twitter received thousands of likes and retweets, encouraging such hate to be openly sold and causing ill will against the minority community of India.

The complaint to NBSA further cited instances of how the host encouraged hate speech against Muslims by calling anti-minority propagandists and also said that in order to respect the diverse religions and composite cultures of India, it was essential to keep a check on the unverified claims and hate propaganda against Muslims.

It was also averred that the unchecked proliferation of such telecasts by the electronic media have the deleterious impact of misinforming and prejudicing public discourse, often as a precursor to social ostracization and even violence.

In its response, News Nation submitted that neither the anchor nor the broadcaster was liable for the actions or choices of words used by the other panellist present in the impugned programme.

However, despite it, the broadcaster stated it apologizes if anything or any statement had hurt anybody at any level. The subject show/report at no point of time delved into any kind of defamation nor targeted a particular community or religious group as alleged.

After going through the complaint, response, rejoinder and submissions by both parties, the NBDSA concluded that the channel had only "made generalised submissions" and "failed to submit any specific reply to the grievances of the complainant."

Lastly, the News Broadcasting and Digital Standards Authority (NBDSA) ordered News Nation to take down all videos of its show on "Conversion Jihad".