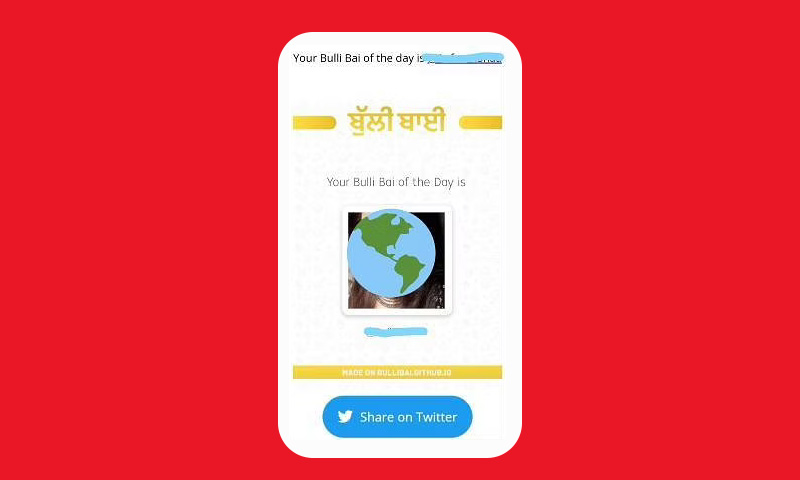 The Bandra Metropolitan Magistrate's Court on Thursday refused to grant bail to three students Vishal Jha, Shweta Singh and Mayank Rawat accused in the Bulli Bai App Case being investigated by the Mumbai police's Cyber Cell.The court noted the seriousness of the offence, the primary stage the investigation is in and also their technical knowledge using which they may tamper with evidence...

The court noted the seriousness of the offence, the primary stage the investigation is in and also their technical knowledge using which they may tamper with evidence if released on bail.

On Wednesday, Magistrate Komal Singh Rajput also remanded accused Neeraj Bishnoi and Omkareshwar Thakur to Mumbai police's custody till January 27. They were produced on transit remand from Delhi. the prosecution alleged that Bishnoi had created the App, Thakur was the coder.

The primary allegation against the three students accused is that they were in contact with each other and with the creators of the App. It is also alleged that the accused followed the criminal App, posted and promoted the criminal App through the fake Twitter accounts they had created.

The FIR was registered earlier this month against necessary Twitter handles and the developer of Bulli Bai. The offences are Sections 153A (promoting enmity on grounds of religion etc), 153B (imputations prejudicial to national-integration), 295A (insulting religious beliefs), 354D (stalking), 509 (word, gesture or act intended to insult the modesty of a woman), 500 (criminal defamation) of the Indian Penal Code and Section 67 (publishing or transmitting obscene material in electronic form) of Information Technology Act.

Opposing bail to the three accused, the Mumbai Police had said that the accused were also involved in the Sulli Deals App case registered with the Delhi police. Rejection of the bail application of Neeraj Bishnoi by a court in Delhi was also cited. Bishnoi was arrested by the Delhi Police in the Bulli Bai App case registered over there.

It was also argued before the Mumbai court that the accused might abscond as two of them hail from Uttarakhand and one from Bangalore; that they have technical knowledge, and if released on bail, they are likely to destroy evidence and intimidate witnesses in the crime. It was also submitted that the investigation also found that the accused had used facilities like VPN and Protonmail to conceal their identity even before his arrest.

Another point raised while opposing the applications was that the Twitter accounts held by the accused had 'Sikh' mentioned in their handles which made it look as if the Khalsa Sikh Force had created the App. The police told the court that they had prevented a possible law and order situation by arresting the accused.

"This was likely to create a rift between the two communities and disrupt public peace. The timely arrest of the accused thus created law and order problem is prevented," the police's reply read.

Additionally, the sensitivity of the case, further investigation to find out if someone inspired the accused and analysis of the alleged complex information revealed by the accused were also cited as grounds for rejecting the bail applications.

The three accused denied the case and said they hadn't created the controversial App and had only a limited role in the alleged offence.

Advocates Aarti Deshmukh and Shivam Deshmukh for Rawat argued that all the offences against Jha were punishable with imprisonment only up to three years. Advocate Sandip Sherkhane claimed that Rawat's "talent had been misused by manipulating him" and he was falsely implicated.

Jha's bail application claimed that he did not know other accused from the case therefore there was no meeting of minds.

The police had already seized one laptop, mobile phone and 2 SIM cards from him, so the question of tampering with the evidence does not arise, was also argued, adding that he did not have any criminal antecedents and the offences against him.

On the point of police's request for further custody Jha's lawyers argued that once he was remanded in judicial custody, by consent, the plea for further custody became infructuous. It was also submitted that no custody was required for securing OTPs and passwords.

Mayank Rawat's advocate Sandeep Sherkhane told the court that he was misguided and used by the hate app's creator Neeraj Bishnoi and that he was a bright student scoring 99 per cent. He also submitted that the issue had become political and media and politicians had 'hyped' it.

Another argument was Rawat was not the creator of the app and had only shared the link on Twitter.

Shweta Singh's advocate submitted before the court that thew accused was Dalit and an orphan and sought relief also on the ground that she is a woman.

Who are the Accused ?

Shweta Singh has passed her 12th in the science stream and is a college student. She has comprehensive knowledge of technical matters. She has created seven Twitter Accounts, one Instagram account and one Gmail account. The police claimed that several of her accounts were suspended.

Two mobile phones have been seized from her. She also has three proton mail accounts. It is alleged that all the accused were in contact with each other through Twitter and Instagram and were a part of similar ideological groups, and would often post toxic content on social media.

He is the first accused to be arrested in the case, an engineering student from Bangalore. The police had already seized one laptop, mobile phone and 2 SIM cards from him. He was arrested on January 4 and is alleged to be operating one fake Twitter account. The police also alleged that he was in touch with other accused.