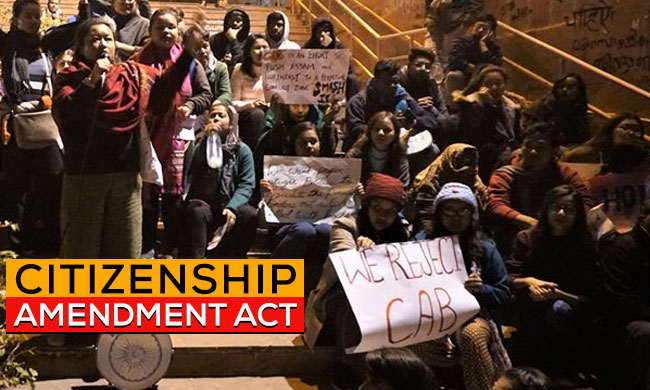 In a letter addressed to the Chairman of the Bar Council of India, a Member of the Bar Council resisted its call for abating protests against the Citizenship Amendment Act, 2019 and urged the Council to express solidarity with the protests going on across the country.

Coming out in support of the protestors, Advocate N Manoj Kumar said,

"The protests against CAA and NRC are the attempt of the Indian citizens to save their Constitution from being trampled upon by an authoritarian regime on the strength of their brute majority in the Legislature. Being the real torch bearers of the Constitution, it is the duty of every self esteemed lawyer to lead the struggle to defend the Constitution."

On Sunday, the Bar Council of India had appealed to the people of the country to maintain peace and harmony. It had urged the Lawyers, Bar Associations, State Bar Councils, students Associations of NLUS and all Law Colleges to ensure that law and order is maintained throughout the country.

"The Leaders of the Bar and young students are requested to take active role in diffusing the disturbances and violence in the country: We are to convince the people and the illiterate ignorant mass, who are being misled by the some so-called leaders the matter with regard to Citizenship Amendment Act is under consideration of our Supreme Court, therefore everyone should await the decision of Apex Court," the Council's statement read.

In his dissenting letter, Advocate Manoj Kumar has pointed out that even while the matter is pending before the Supreme Court it does not prejudice the people's right to express their disagreement with the government.

"Constitutional Courts may decide upon the constitutionality or otherwise of a legislation. But, in a democratic polity, expression of dissent against a patently arbitrary and unjust law need not always be through the process of Courts and can be through popular protests," he said.

As per Manoj Kumar, CAA is a class legislation, intended to "tear apart" the secular fabric of the country. He said that there is no plausible rationale in grouping three countries of Pakistan, Afghanistan and Bangladesh, or limiting the benefits of the Act to "selected minorities", leaving apart the other neighboring countries.

He has questioned the rationale behind excluding the persecuted Hindus of Tamil descend in Sri Lanka, Hindu Madhesis of Nepal, Christians of Bhutan, Ahmadiyas and Shias of Pakistan, Buddhists of Nepal, Rohingyas in Myanmar and Muslims in Sri Lanka, from the purview of the CAA.

Citing examples of ethnic persecution of Balochs, Sindhis and Mohajirs in Pakistan, ethnic Indians in Malaysia and Fiji and Tamils in Sri Lanka, Kumar pointed out that persecution is not merely religious and may be for varied reasons. He said that the provisions of CAA, which "harp on religious identity", puts the country in a situation where it will have to choose between the State and religion, reflecting inconsistency with Articles 14, 21 and 25 of the Constitution.

Kumar further said that the protests had turned violent only in NDA ruled states and the protests had by and large been peaceful in Non-NDA ruled States, speaking volumes for the fact that who the real perpetrators of violence and bloodshed are.

"The entire country, cutting across political allegiances and religious beliefs, are out on the streets protesting against CAA and the proposed NRC…

…We have to ensure that the fundamental right of equality guaranteed under Article 14 of our secular Constitution to any person within the territory of India is made available to all irrespective of religious faith," he said.