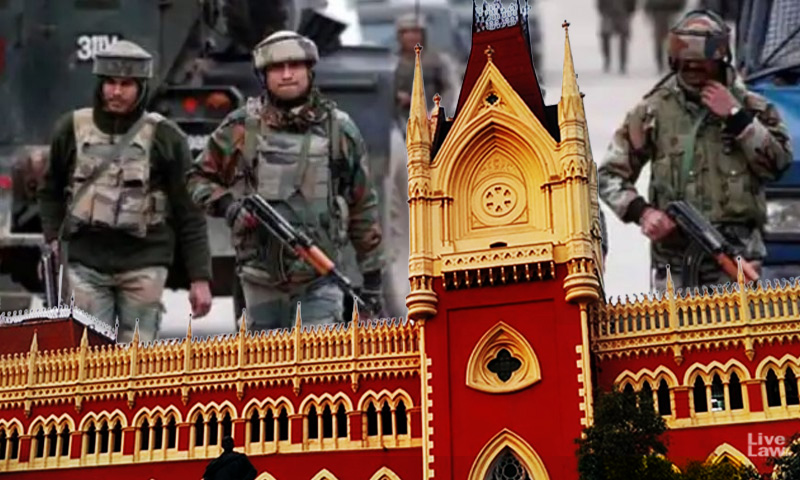 The Calcutta High Court on Thursday directed the State Election Commission to hold a joint meeting with officials of the West Bengal government within 12 hours and decide as to whether deployment of central paramilitary forces will be required for the peaceful conduct of the upcoming elections to the Bidhannagar Municipal Corporation.The Court further underscored that in case the...

The Calcutta High Court on Thursday directed the State Election Commission to hold a joint meeting with officials of the West Bengal government within 12 hours and decide as to whether deployment of central paramilitary forces will be required for the peaceful conduct of the upcoming elections to the Bidhannagar Municipal Corporation.

Elections to four municipal corporations – Siliguri, Bidhannagar, Asansol and Chandernagore are scheduled to take place on February 12, 2022 and the results for the four civic bodies will be declared on February 14. Polls to these four municipal corporations were postponed at the instructions of the High Court considering the spike in COVID-19 infections a couple of weeks ago.

"We hereby direct that the Commissioner, State Election Commission will hold the joint meeting with the Chief Secretary and Home Secretary of the State and the Director General and Inspector General of Police within 12 hours and will do the reappraisal of the ground situation in Bidhannagar Municipal Corporation area and ascertain if deployment of paramilitary forces is necessary for ensuring the peaceful conduct of election of Bidhannagar Municipal Corporation and if require, he will submit and requisition to the Union Ministry of Home Affairs or the competent authority for deployment of paramilitary forces and any request in this regard will be duly considered having regard to the ground situation and in the interest of ensuring peace, security and orderly conduct of the forthcoming Bidhannagar Municipal Corporation Election without any delay."

Opining that the Commissioner of the State Election Commission will be held personally liable to ensure that no violence takes place, the Court further remarked,

"In case, if the Commissioner, State Election Commission forms an opinion that deployment of the paramilitary forces during Bidhannagar Municipal Corporation election is not necessary, then he will be personally liable to ensure that no violence takes place and free, fearless and peaceful elections are held in Bidhannagar."

During the hearing, the petitioners had questioned the legality of the orders of the State Election Commission dated November 29, 2021 and February 7, 2022. The order dated November 29, 2021 had stipulated that a polling agent must be an elector of the polling area wherein polling station is set up. The subsequent order dated February 7, 2022 further stated  that for polling premises where more than one polling station are situated, the polling agent must be an elector of any polling station area located within that premises.

The State Election Commission had argued that these orders had imposed such a restriction from the security point of view in order to prevent any person who is not an elector of the polling station area concerned to function as a Polling Agent or Relief Agent.

Opining that such orders are not unlawful and are not in conflict with any State legislations, the Court observed,

"These orders have been issued by the Election Commission exercising jurisdiction under Article 243-ZA of the Constitution which vest the State Election Commission with the requisite powers to take necessary steps for conducting the election. The orders dated 29th November, 2021 and 07th February, 2022 do not run counter to any of the provisions of the West Bengal Municipal Elections Act, 1994 or the West Bengal Municipalities (Conduct and Elections) Rules, 1995. The Handbook for Polling Agents, 2014 relied upon by the Counsel for the applicants is in the nature of guideline and it is not in respect of local body elections and even otherwise the orders of the State Election Commission are not in material conflict with those guidelines."

Dismissing the prayer of the petitioners regarding the simultaneous holding of counting of votes and declaration of results of all the concerned Municipal Corporations, the Court held that the Supreme Court in the case of State of Goa v. Fouziya Imtiaz Shaikh has held that from the date of notification of election till the date of declaration of result, a judicial hands-off is mandated pursuant to Article 243-ZG of the Constitution.

The Court noted that in the instant case, the notification dated February 3, 2022 has already been issued by the State Election Commission vide notification dated February 3, 2022 has already notified the date of polling of remaining Municipal Corporations as February 27, 2022 and further notified that the election process will be completed before March 8, 2022.

The Court however granted liberty to the petitioners to file appropriate representation before the State Election Commission with all the supporting materials in respect of their prayer for simultaneous counting of votes in all the Municipal Corporations or simultaneous declaration of result of polling in all the remaining Municipal Corporations or postponing date of polling of remaining corporations, etc.

The Court directed that if such representations are filed within 24 hours from today, then the State Election Commission has to take an appropriate decision in accordance with law within 48 hours.

It was further underscored that directions issued by the Court previously in respect of installation of CCTV cameras in polling booths etc must be compiled with by the respondent authorities. It may be noted that the High Court back in December 2021 had directed the State Election Commission to CCTV cameras in all the main and auxiliary polling booths as also in strong room where EVMs will be kept during the Kolkata Municipal Corporation Election which took place on December 19.

The matter is slated to be heard next on February 15.

The Court had earlier reserved judgment in the batch of PILs seeking such deployment of central forces for the Bidhannagar Municipal Corporation elections in the wake of allegations of large scale violence.

The State Election Commission has notified that the counting of votes for the first phase of municipal elections i.e. for four municipal corporations – Siliguri, Bidhannagar, Asansol and Chandernagore will take place on February 14. However, no date for counting of votes had been notified for the elections to the remaining 108 municipalities which is scheduled to take place on February 27.

During the hearing, the petitioners had submitted that it is imperative that central parliamentary forces are deployed during the upcoming elections for the Bidhannagar Municipal Corporation considering the ongoing political violence. Reliance was applied on the Supreme Court judgment in All India Trinamool Congress v. State of Tripura wherein the Apex Court had the Home Secretary of Tripura Government, the State Election Commission and the Director General of Police to ensure that every polling booth is manned by sufficient strength of Central Armed Police Force(CAPF) personnel in view of the allegations of political violence.

On the other hand, the State Election Commission had apprised the Court that the Commission has taken a very realistic appraisal of the situation and had accordingly deployed various senior police personnel in order to maintain peace and security. A detailed chart enumerating the various confidence building measures undertaken by the Commission was also filed before the Court. The Court was also informed that regular route marches are being conducted and sufficient number of police personnel have been deployed for maintain law and order.

Additional Solicitor General Y.J Dastoor appearing for the Centre had informed the Bench that if the Court permits, the Centre is ready to deploy central forces in Bidhannagar within a span of 24 hours.