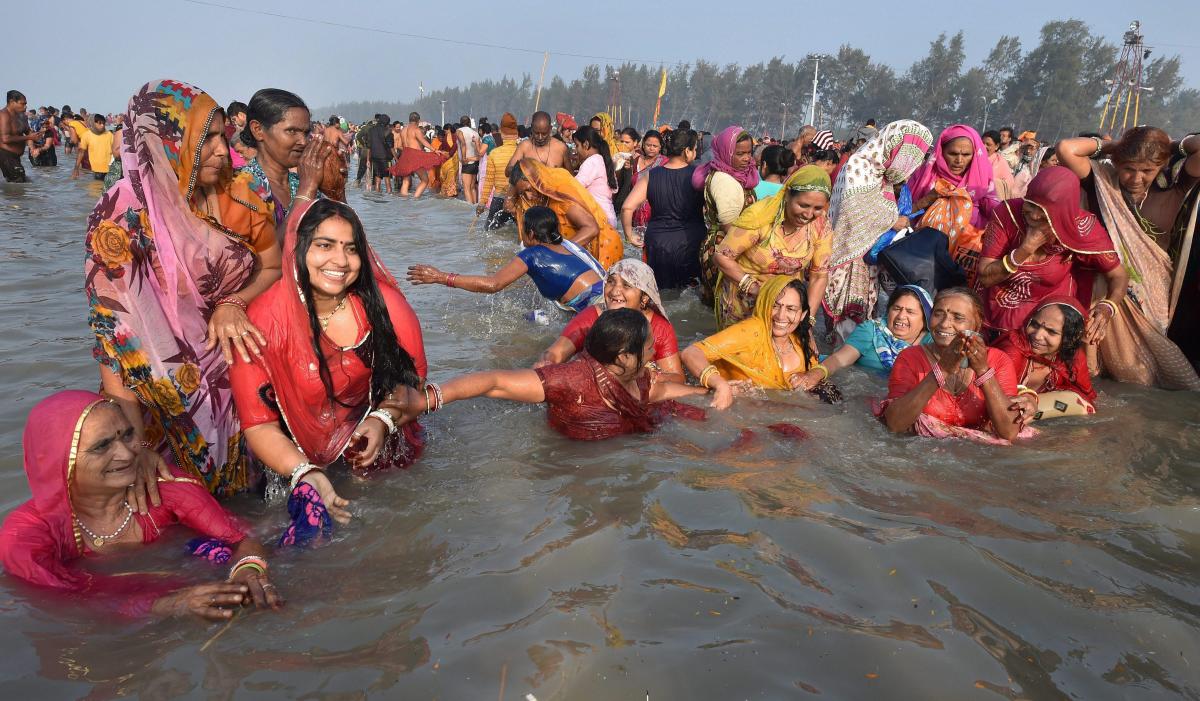 The Calcutta High Court on Thursday reserved judgment in the plea seeking cancellation of this year's Gangasagar Mela amidst the fresh surge in Covid-19 cases in the State of West Bengal. Every year, on Makar Sankranti, lakhs of Hindu devotees flock to the Sagar Island in West Bengal's South 24 Parganas district to take a holy dip and offer prayers at the Kapil Muni temple. This year, the...

The Calcutta High Court on Thursday reserved judgment in the plea seeking cancellation of this year's Gangasagar Mela amidst the fresh surge in Covid-19 cases in the State of West Bengal.

Every year, on Makar Sankranti, lakhs of Hindu devotees flock to the Sagar Island in West Bengal's South 24 Parganas district to take a holy dip and offer prayers at the Kapil Muni temple. This year, the Mela is scheduled to take place from January 8 to January 16, 2022.

"We have not made up our mind, we will examine it and we will pass an appropriate order".

The Chief Justice further remarked orally, "It has to be done in a regulated manner". He further enquired from the Advocate General, "Will you suggest an independent body to see if it is being regulated?" To this, the Advocate General responded that the State government would provide all possible coorporation.

The plea has been moved by one Dr. Avinandan Mondal, a doctor by profession, who contended that the infection may spread further as around 30 lakh pilgrims visit the religious fair at Sagar Island every year. Accordingly, he sought directions to stop the Gangasagar Mela this year as the State of West Bengal has been witnessing an exponential rise in the number of Covid-19 cases.

On the last day of hearing, the Bench had directed the State government to apprise the Court by January 6, of its decision as to whether it would permit the Mela to take place in a regulated manner or impose a complete ban. "Having regard to the severity of spreading of COVID virus, we expect that the State will seriously consider the plea to ban the Mela this year and take a decision in this regard keeping in view the following factors: (1) Earlier order of this Court holding that life is more important in every sense in comparison to religious practices, beliefs and faith. (2) Possibility of spread of virus on account of oral droplets and nasal droplets in the river water and their percolation and transmission through the water when the infected pilgrims will take holy dip. (3) The aspect of safety of not only the pilgrims but the persons coming in contact with the infected pilgrims and the police personnel deployed in the Mela and frontline health workers deputed in this process. (4) The State will duly take into account the positivity rate of virus and fact that within the last 24 hours there is 50 per cent increase in number of cases and also the fact that large number of doctors are already infected", the Bench had observed.

Submissions on behalf of the State

Advocate General S.N Mookerjee informed the Court on Thursday that the State government has decided to go ahead with the Ganga Sagar Mela by following the requisite Covid-19 protocol. He further submitted before the Court that in the State of West Bengal, close to 71.87 percent of adults have been given the first doze of vaccine. Furthermore, he submitted that approximately 50 percent of the population in the State have been double vaccinated.

The Court was further informed that local residents of the Sagar Island have also been double vaccinated and that the positivity rate at the Diamond Harbour Health DIstrict is under control. The AG also stated that the State government is not expecting more than 5 lakh people this time during the Mela. It was further stated that 50,000 Sadhus have already arrived and that 30,000 people have already visited the Mela ground.

It was further submitted that close to 10,000 police personnel, 5000 volunteers, and 735 people from the medical team have been deployed to take care of any exigency. All of these persons have been double vaccinated, it was stated further.

The Bench was also apprised that provisions for mass sanitization are available and that a temporary hospital has been set up on the Mela ground. Furthermore, it was stated that the bed capacities are as follows- 125 in isolation wards, 235 in safe homes, 630 in Covid-19 hospitals, 530 in quarantine centres and 193 in wellness centres.

The AG further submitted that all pilgrims will mandatorily undergo screening and will have to submit their vaccination certificates. It was also stated that provisions for conducting random antigen tests and RT-PCR tests have been made. People who will be testing positive will immediately be isolated, the AG stated further.

The Court was further apprised that a green corridor through both land and water has been demarcated for fast exit in case of any emergency. The AG also stated that the State government has made arrangements for E-Snan and E-Darshan. Massive campaigns are also being held to spread awareness about Covid-19 protocol, it was stated further.

The Chief Justice at this point of time enquired from the Advocate General, "What measures have been taken to discourage people from coming to the Mela?" In response, the AG submitted that the State government is encouraging online broadcasting and e-streaming of rituals.

The AG further submitted that duties are more honourous under the National Disaster Management Act, 2005 and thus the State government would rather place reliance on it than the Ganga Sagar Mela Act, 1976 in case the situation goes out of control.

Submissions on behalf of the petitioner

"Kindly look at the conduct of the State government", the counsel remarked.

"With only 25 ambulances they will manage a crowd of 5 lakh people?", the counsel remarked. He further underscored, "Religion is not more important than a person's life".

The counsel further emphasised that the State government should have notified the Sagar Island as a 'notified area' as per the provision of Section 2(d) of the Ganga Sagar Mela Act, 1976.

Accordingly, he prayed for directions to immediately stop the Ganga Sagar Mela.

Advocate Aniruddha Chatterjee appearing for the West Bengal Doctors' Forum (intervening party) submitted before the Court that the instant case is 'an absolute case of policy paralysis'. He further stated that it is the duty of the State to protect the citizens at large which the State has failed to do.

The counsel further brought to the notice of the Court that the State government is still 'planning' of establishing a temporary Covid hospital and that no such hospital has been established yet. He further submitted that the Sagar Rural Hospital has only 60 hospital beds with only 11 doctors.

"There is no question of infrastructure being robust enough to tackle the influx", the counsel submitted further. He further informed the Court that in Calcutta Medical College and Hospital 250 doctors have been infected with Covid-19 and in NRS Medical College 198 doctors have been infected.  "The State has failed in its duty to protect the life of citizenry of India", the counsel further stated.