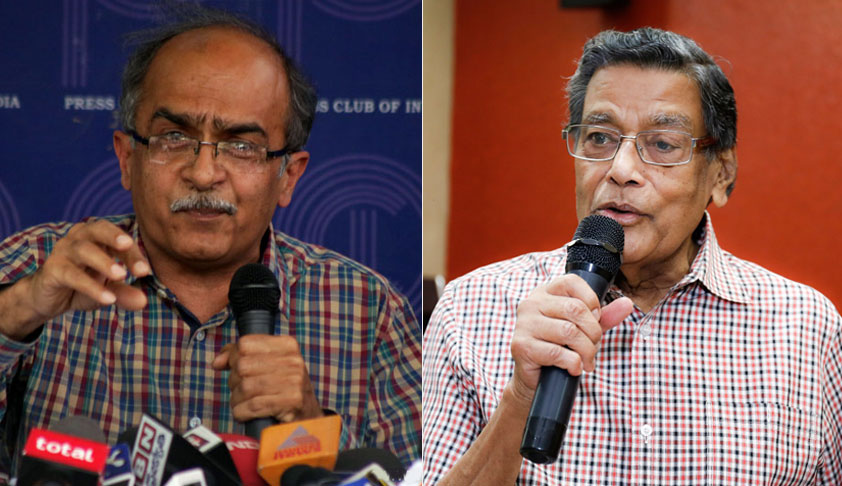 Attorney General K. K. Venugopal has now moved a contempt petition against Advocate Prashant Bhushan for posting tweets alleging that the top law officer of the country had misled the court in submitting that M. Nageshwar Rao's appointment as the acting CBI Chief had the approval of the Selection Committee.

I have just confirmed personally from the Leader of Opposition Mr Kharge that no discussion or decision in HPC meet was taken re appt of Nageswara Rao as interim Director CBI.The govt appears to have misled the court and perhaps submitted fabricated minutes of the HPC meeting! https://t.co/MbEC5YLjkD

On Friday, in the course of the hearing of NGO Common Cause's PIL for quashing of the appointment before a bench headed by Justice Arun Mishra, the AG had presented in a sealed cover the minutes of the meeting of the Committee, which he called a "confidential document"

Referring to the earlier judgment authored by Chief Justice Ranjan Gogoi, Mr. Bhushan had argued that the general power which the government was claiming to appoint the interim Director was held to be not valid and the permission of the Selection Committee ought to have been taken.

Indicating the conclusions as laid out in the minutes of the January 10 meeting of the Committee, the AG pointed out that it had taken a decision on the interim Director.

Admitting that he was not aware of the fact, Mr. Bhushan had conceded that if such a decision was taken, the issue no longer endures.

Later in the day, the lawyer had taken to his Twitter handle to contend that the leader of the single largest party in the Lok Sabha and part of the three-member High-Powered Committee (HPC), Mallikarjun Kharge, had confirmed personally that there had been no deliberations as to the interim Director During the Committee's meetings. Mr. Bhushan had averred that accordingly, the minutes produced by the AG were perhaps fabricated-

"Today in CBI Dir appt case, the govt made a startling new claim that Nageswara Rao was selected as the interim director in the HPC meeting on 11th January when they decided to transfer out Alok Verma! This seems to be at variance from LOP Kharge's version"
"I have just confirmed personally from the Leader of Opposition Mr Kharge that no discussion or decision in HPC meet was taken re appt of Nageswara Rao as interim Director CBI.The govt appears to have misled the court and perhaps submitted fabricated minutes of the HPC meeting!"

"See the letter of LOP Kharge re the unilateral appointment of Nageswara Rao as interim Director CBI by govt, w/o going through HPC of PM, CJI & LOP. Yet govt produced minutes of meeting saying that HPC approved appt. Seems govt gave fabricated minutes to court! Contempt of Court!"

The Counsel had also attached the letter dated January 14 addressed by Kharge to the Prime Minister (which was also released in public domain) where the leader of the opposition had categorically stated that the appointment of the interim Director was never placed before the Selection Committee at its January 10 meeting and consequently, it is in violation of sections 4A(1) and 4A(3) of the DSPE Act. "The actions of the government in this matter indicate that it is scared of having the CBI headed by an independent Director", the letter reads.

In his contempt plea, the AG had advanced that Mr. Bhushan deliberately intended to cast aspersions on his integrity and honesty in placing the minutes of the meeting before the apex court during the February 1 hearing.

The same is now scheduled to be heard by the bench of Justices Mishra and Navin Sinha on Wednesday, on which date the court was anyway going to take up Common Cause's petition, the AG having assured on Friday that the appointment of the full-time CBI Director will have been effected till then.