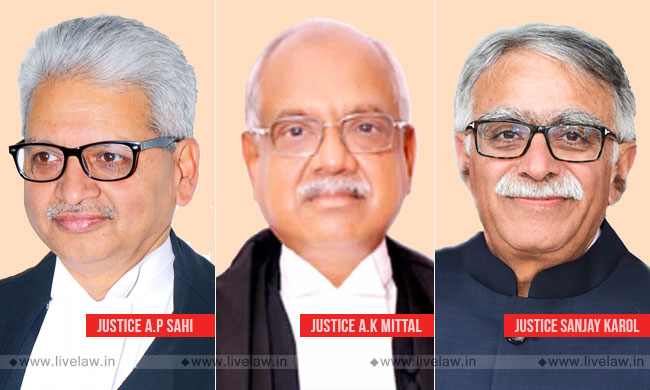 The Central government has notified the appointment of new Chief Justices in the High Courts of Madras, Madhya Pradesh and Patna.

In notifications issued today, the centre notified appointment of:

The Collegium had recommended their transfers on October 15.

Justice Sahi enrolled as an Advocate in the Allahabad High Court after obtaining his LLB degree in 1985. He practised mainly on the Civil & Constitutional side, and also worked as counsel for large number of Educational Institutions including. He was elevated as an Additional Judge of the Allahabad High Court in September 2004 and was made a permanent Judge in August 2005. He swore in as the Chief Justice of Patna High Court on November 17, 2018.

Justice Sahi will fill up the vacancy created by the resignation of the former Madras HC Chief Justice V K Tahilramani. She had resigned in protest of the collegium proposal to transfer her to Meghalaya HC.

Justice Mittal was earlier proposed to be appointed as the Chief Justice of Madras HC in place of Justice Tahilramani.

Earlier, the Collegium had recommended Justice Akil Kureshi as the CJ of MP HC. This proposal was later modified to propose Justice Kureshi's appointment as CJ of Tripura HC, after communications from the Department of Justice.

Justice Karol enrolled as an Advocate in the year 1986. He practiced in various Courts, including the Supreme Court of India, in Constitutional, Taxation, Corporate, Criminal and Civil matters. He was designated as Senior Advocate in the year 1999 and he remained on the Senior Panel for Central Government, Supreme Court of India. He discharged Constitutional duties as an Advocate General of Himachal Pradesh from 1998 to 2003. He was Elevated as Judge of the High Court of Himachal Pradesh, on 8th March, 2007 and assumed charge of the office of the Acting Chief Justice of the High Court of Himachal Pradesh with effect from 25th April, 2017 and worked as such till 5th October 2018. Has was appointed as the Chief Justice of High Court of Tripura on November 9, 2018.