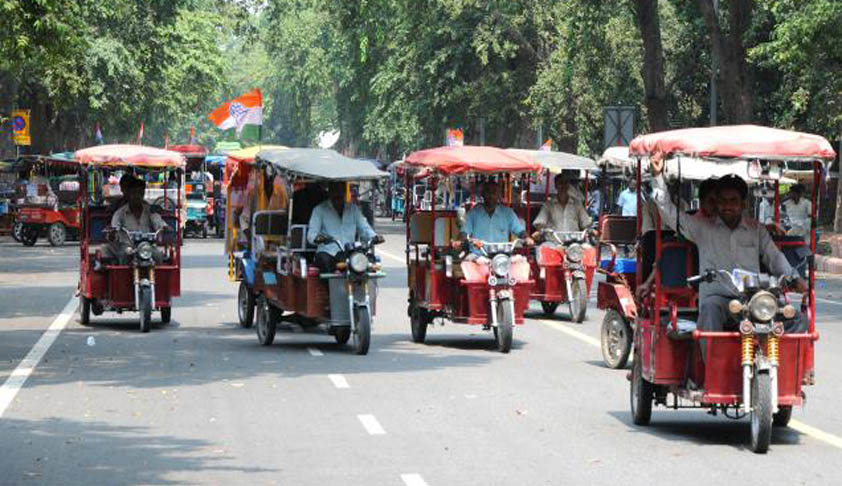 The Delhi High Court has directed the Delhi Government to continue with the vigilance and issue challans to e-rikshaws and e-carts which do not have fitness certificates to ply on the roads.

A division bench comprising Acting Chief Justice Vipin Sanghi and Justice Navin Chawla was dealing with a public interest litigation stating that there are about 22,000 unauthorized autos and 52,280 unlicensed e-rickshaws presently plying on Delhi roads.

In this backdrop, the plea stated that the recent decision of the Delhi Transport Authority to invite fresh applications for e-auto should not be implemented until the already existing unauthorized vehicles are removed.

Earlier, the Bench had expressed its displeasure over the Delhi government's inaction to prevent plying of unauthorized e-rickshaws and autos while noting that the authorities concerned had failed to take any action.

It had also observed that Respondents were "not serious" about enforcing compliance of law in relation to the requirement of having a fitness certificate by every vehicle plying on road. The Bench had thus directed that forthwith remedial steps be taken and a status report in that regard be filed.

During the latest course of hearing on May 11, the Court perused the status report filed by the Delhi Government in terms of the earlier order and noted that the same tabulated the number of challans issued in respect of Auto TSRs and e-rickshaws in the months of January to April 2022.

The Delhi Government also apprised the Court that an order dated 05.05.2022 was issued exempting additional fee on account of delay of renewal of fitness certificate in respect of e-rikshaws and e-carts and that the past dues in that regard were exempted up to 15.06.2022.

"Keeping in view the aforesaid, we direct the respondents to continue with their vigilance and issue challans to e-rikshaws and e-carts which do not have fitness certificates to ply on the roads so that more and more people driving such vehicles fall in line and obtain the requisite fitness certificate," the Court ordered.

While seeking a further status report to be filled, the Court listed the matter for further hearing on July 18.

It was pointed out in the plea that the Supreme Court had in the case of MC Mehta v. Union of India, vide order dated 11.11.2011, fixed a cap of 1 lakh auto permits for CNG variant in Delhi. Out of 1 lakh, the petitioner claims, the Transport Authority has already issued 95,000 permits and reserved more than 4,200 for E-Autos in a bid to encourage the adoption of electric vehicles.

Notice on the plea was issued in January this year. In its counter affidavit, the Delhi government submitted that as of 22 December 2021, 80,583 e-rickshaws were plying on Delhi roads without fitness certificates. Similarly, the fitness certificate of 9,451 auto rickshaws has expired which continue to play on the roads of Delhi.