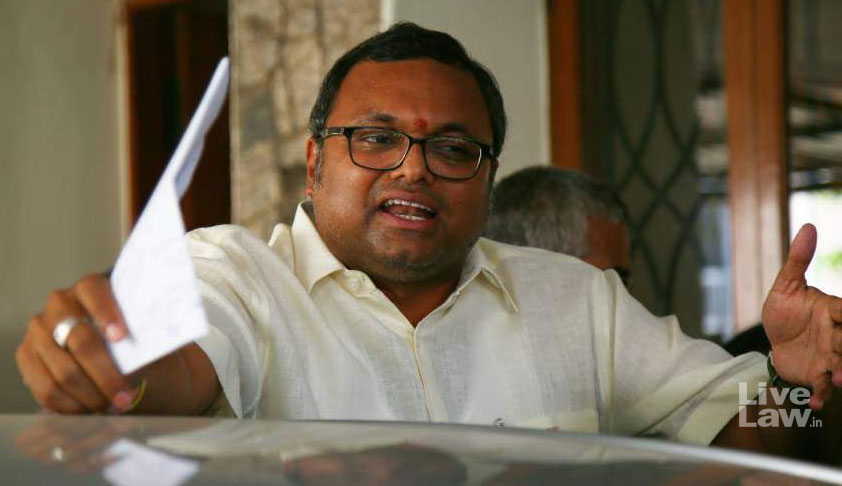 During the course of hearing today, Sibal argued that while the allegation in the FIR was that cheque was converted into cash and given to Bhaskararaman, there was nothing on record to show the same in any of the documents.

"What happened to that cash is not reflected anywhere," Sibal added.

Highlighting various errors in the order passed by the Trial Court denying anticipatory bail to Karti, Sibal further argued that if the agency had not investigated anything in the matter yet, then why should Karti be prosecuted in any manner.

"If the investigation is yet to begin, then there is no justification for ED to arrest the petitioner. They can arrest only after there is is prima facie evidence collected," he argued.

Accordingly, Sibal submitted that the conclusion of the Special CBI Judge was ex facie wrong.

"That's their case. It is to be approved by the Home Secretary. That name they will not reveal because the then Home Secretary is a cabinet minister," he added.

Sibal submitted that the reasoning of the Trial Court is based on pure speculation. He also argued that in the CBI case, Karti has already been given protection in view of Trial Court's order directing agency to give a 3 days notice in the event of his arrest.

"In this case, as far as PMLA is concerned, there can be no proceeds of crime. If the money has yet not reached me, how can I launder it? It's nobody's case that it has reached me. How does sec. 3 of PMLA apply? First they have to show that money has reached Bhaskararaman in cash. They haven't taken any statement of Home Secretary who granted approval. They don't know who was the public servant, who influenced it, what is the conspiracy?," Sibal argued.

He concluded by arguing that Karti was not a flight risk and that in the other matters, he had been granted permission to travel and has even cooperated with the agency by going thrice after the CBI called him.

On the other hand, ASG SV Raju questioned the maintainability of the anticipatory bail plea and argued that the same was filed prematurely.

He argued that the provision of anticipatory bail confers concurrent powers and not appellate powers on the Court and that Sibal was arguing as if it was an appeal challenging the Trial Court order.

"He has argued the matter as if the stage of investigation is concluded. We have not even started investigation. It is like a case where suppose there is a dead body, somebody says a dead body is lying there, the police has to investigate and find out whether it is a murder or homicide or suicide or who is involved. I'm not saying that a person cannot move anticipatory bail application is there is no FIR. Even if there is no FIR, anticipatory bail is applicable provided there are genuine reasons to believe," Raju argued.

Raju further submitted that unlike IPC offences, different apprehension is required for PMLA offences because of sec. 19 of the Act and that severe restrictions or conditions are there on the power of arrest which can be exercised while arresting a person in a PMLA offence.

Furthermore, he added that the investigation is at a very nascent stage and that if anticipatory bail is granted, it will lead to a situation where protection is granted to accused only because the agency couldn't collect relevant material due to paucity of time.