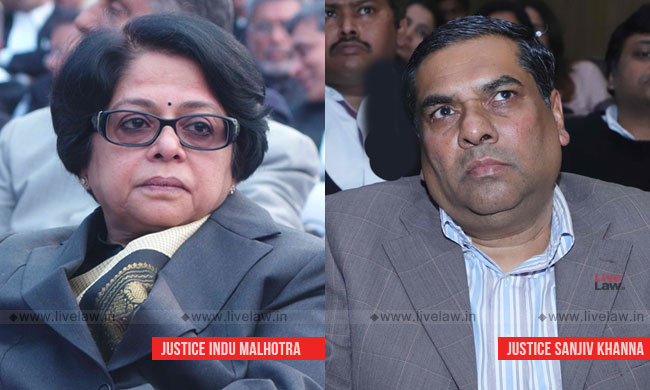 x
"The relationship between a chit subscriber and the chit foreman is a contractual obligation, which creates a debt on the day of subscription."

The Supreme Court has observed that the relationship between a chit subscriber and the chit foreman is a contractual obligation, which creates a debt on the day of subscription.On default taking place, the foreman is entitled to recover the consolidated amount of future subscriptions from the defaulting subscriber in a lump sum, the bench of Justice Indu Malhotra and Justice Sanjiv...

The Supreme Court has observed that the relationship between a chit subscriber and the chit foreman is a contractual obligation, which creates a debt on the day of subscription.

On default taking place, the foreman is entitled to recover the consolidated amount of future subscriptions from the defaulting subscriber in a lump sum, the bench of Justice Indu Malhotra and Justice Sanjiv Khanna said.

The issue considered by the Apex Court, in Oriental Kuries Ltd. vs.  Lissa, was concerning the jural relationship between a chit fund entity and the subscribers, created by a chitty agreement; and whether it is a debt in prasenti or a promise to discharge a contractual obligation.

In this case, the single bench, relied on a judgment of full bench of the High Court in P.K. Achuthan and Anr. v. State Bank of Travancore, Calicut, wherein it was held that a chit fund is essentially a debt in praesenti, but permitted to be paid in installments. In appeal, the division bench noted that the decision of the full bench in P.K. Achutan (supra) had been over-ruled in Janardhana Mallan & Ors. v. Gangadharan & Ors., wherein a five-judge bench of the Kerala High Court held that future installments payable by a chit subscriber are not a debt owed to the chit foreman, and therefore, could not be recovered in case of default in payment of an installment. Relying on this judgment, the Division Bench held that by entering into a chitty agreement, a debt is not created at once by the subscriber in respect of payment of all future installments, as the chitty variola only contains a promise to pay, which is not a promise to repay an existing debt, but only to pay and discharge a contractual obligation. It held that the future installments could not be recovered.

The Apex Court bench observed that where a contract provides for payment of money in installments, and contains a stipulation that on default being committed in paying any of the installments, the whole sum shall become payable at once, such a stipulation would not be in the nature of a penalty. Disagreeing with the Division bench view, the Apex Court said:

"When a prized subscriber is allowed to draw the chit amount, which is in the nature of a grant of a loan to him from the common fund in the hands of the foreman, with the concessional facility of effecting re-payment in installments; this is subject to the stipulation that the concession is liable to be withdrawn in the event of default being committed in payment of any of the installments. The chit subscriber at the time of subscription, incurs a debt which is payable in installments. If a subscriber is permitted to withdraw the collected sum on his turn, without being bound to pay the future installments, it would 15 jeopardize the interest of all other subscribers, and the entire mechanism of the chit fund system would collapse."

The bench also added that the object of the Chit Funds Act, 1982 is to empower the foreman to recover the amount in a lump sum from a defaulting subscriber, so as to secure the interest of the other subscribers, and ensure smooth functioning of the Chit Fund. It added:

"The relationship between the foreman and the subscribers in a chit fund transaction is of such a nature that there is a necessity and justification for making stringent provisions to safeguard the interest of the other subscribers, and the foreman. If a prized subscriber defaults in payment of his subscriptions, the foreman will be obliged to obtain the equivalent amount from other sources, to meet the obligations for payment of the chit amount to the other members, who prize the chit on subsequent draws. For raising such an amount, the foreman may be required to pay high rates of interest.

The stipulation of empowering the foreman to recover the entire balance amount in a lump sum, in the event of default being committed by a prized subscriber, is to ensure punctual payment by each of the individual subscribers of the chit fund. Without punctual payments, the system would become unworkable, and the foreman would not be in a position to discharge his obligations to the other members of the chit fund."