'If Chief Justice Also Says He Belongs To Karnataka, Where Will You Go?' CJ Oka To Petitioner Who Wanted Other-State Judge To Hear His Case 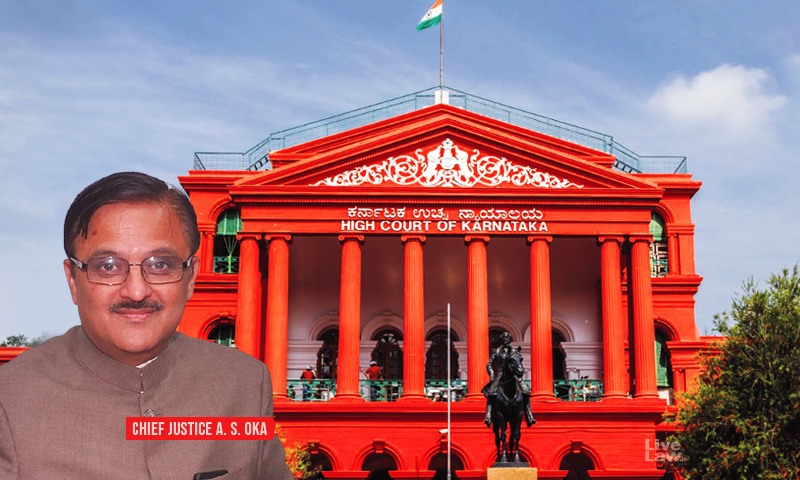 x
The bench dismissed his petition with Rupees 1 lakh cost observing that his allegations scandalized the entire High Court.

The Karnataka High Court on Tuesday dismissed a petition filed by one V Gururaj in which he sought issuance of writ of mandamus seeking that a petition in which he is a respondent, and pending before a single judge bench, should be heard by the bench of Chief Justice or any other court which is constituted by a judge, hailing from a different state other than Karnataka.

A division bench of Chief Justice Abhay Oka and Justice Sachin Shankar Magadum, while dismissing the petition as unconditionally withdrawn, saddled the petitioner with a cost of Rs 1 lakh. The cost has to be paid to the Karnataka State Legal Aid Services Authority, within one month. The amount is to be used for the benefit of children who are forced to sell toys and other items at signals and streets in Bengaluru.

It was also alleged that most of the judges who hail from Karnataka Bar, one way or the other show their allegiance to the said former Chief Justice of India. In the ground for interim relief, it was alleged that all judges of this court who were practicing in courts in Karnataka can be influenced by former CJI and therefore Chief Justice of this court, should either take up matter himself or assign the matter (Wp no 15239/2020) to a judge who has not practiced in courts in Karnataka.

During the hearing the bench observed that "In some other high courts this practice has started of filing such petitions, we want Karnataka High Court to be free of this."

In its order the court said:

"On the face of it such allegation scandalizes the high court of Karnataka and lowers the authority of this court. Moreover, such allegations constitute interference in due course of judicial proceedings. Such allegations tend to interfere with administration of justice."

To the allegation made by the petitioner that all HC judges, who were practising lawyers in the state of Karnataka, will be influenced by a former CJI, the bench said :

"We must remind the petitioner that honorable judges, are hold constitutional posts, are human beings and they are bound to have respect for those who are really honourable and possess very high intellect. However, Judges have taken oath under the Constitution, merely because they respect somebody does not mean that the judge is guided by the said person, when they discharge their duties as a judge. While making such allegations the petitioner has tried to cast aspersion on retired CJI. Petitioner himself has talked about the intellect of Retired CJI. This kind of serious attempt to scandalize this court has to be condemned in strongest possible words."

After completing the order, Chief Justice Oka, whose parent court is the Bombay High Court, said :

On Monday when the petition was listed before the court instead of straight away initiating suo-motu contempt proceedings, the court invited attention of the advocate KUMARA K G appearing for the petitioner to the scandalous allegations made in the petition. On Tuesday, the advocate submitted a memo for retirement, in which he informed the petitioner that he would not continue in the matter. The court invited the attention of the counsel to provision of civil procedure code and pointed out to him that it is the discretion of the court to permit an advocate to retire or not. According to the bench, "We will not allow the said advocate to retire by exercising discretion vested in this court."

Following which the court opined as observed earlier ex-facie the statements made by petitioner constitute criminal contempt under all three clauses of sub section c of section 2, of 1971 Act. The question is whether we should initiate suo-motu Criminal contempt against the petitioner.

The bench said "When we applied our mind of initiating proceedings more than one factors persuaded us not to initiate the proceedings. The first and foremost reason is that we are guided by what is observed by Apex court in the case of S Mulgaonkar, 1978 3 SCC."

It added that "We believe that if at all magnanimity has to be shown it has to be by persons who are holding constitutional post." It clarified that "When we say that we are not inclined to initiate suo-motu criminal contempt proceeding, our silence should not be understood as our weakness by not only the petitioner but by any other person."

The court also said "Apart from the fact that the petitioner has filed a memo withdrawing the petition. The main reason which persuades us from not initiating action is law laid down by the Apex court."

Following which the court said "The petitioner should not be under impression as far as this court is concerned the matter is over. We have noted the statement made before the single judge. We expect the petitioner to immediately go before the single judge and withdraw the said submissions. If the said submission is not withdrawn the option of initiating, suo-motu proceeding always remains open."

Accordingly the court though disposed of the matter kept it for hearing on February 19 for reporting compliance as regards payment of cost.