Preventive Detention Is Based On Suspicion Or Anticipation & Not On Proof: J&K&L High Court Upholds A Detention Order 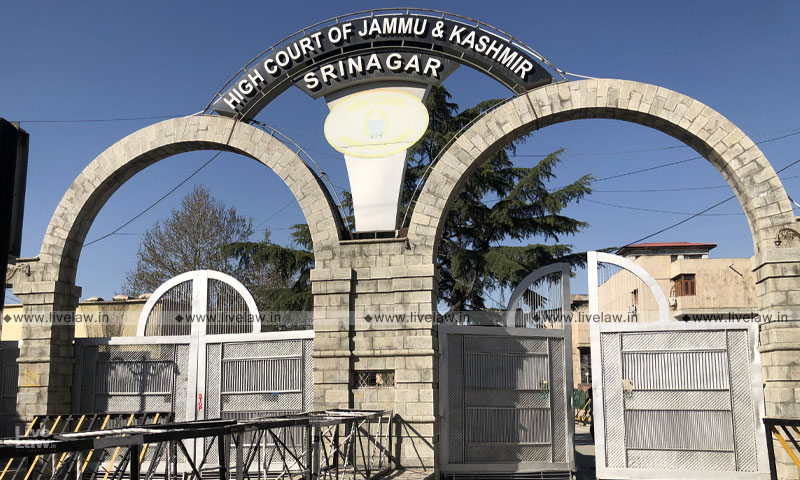 While upholding a detention order, the Jammu and Kashmir and Ladakh High Court recently observed that our Constitution guarantees various freedoms and personal liberty to all persons in our Republic, however, the constitutional guarantee of such freedoms and liberty is not meant to be abused and misused. The Court was also of the view that Preventive detention is based on suspicion...

While upholding a detention order, the Jammu and Kashmir and Ladakh High Court recently observed that our Constitution guarantees various freedoms and personal liberty to all persons in our Republic, however, the constitutional guarantee of such freedoms and liberty is not meant to be abused and misused. The Court was also of the view that Preventive detention is based on suspicion or anticipation and not on proof.

The Bench of Justice Tashi Rabstan observed thus while upholding the detention order passed against one Farhat Mir preventive detention to prevent the detenu from smuggling timber and has been directed to be lodged in Central Jail, Kotebhulwal, Jammu.

The facts of the case

A detention order was passed against one Farhat Mir on the allegation that he was involved in the timber smuggling by chopping down the trees, encroaching the forest land, setting the forest fires, and cultivating the profitable crop on the forest land.

The detenu was stated to have not been produced before the Advisory Board and no opportunity of being heard had been ever provided to detenu by the said Advisory Board nor opined about his continuous detention. It is also submitted that the grounds of detention were never explained to the detenu in vernacular language.

At the outset, the court stressed that the essential concept of preventive detention is that the detention of a person is not to punish him for something he has done, but to prevent him from doing it, further, the Court added thus:

"While the object to the punitive detention is to punish a person for what he has done, the object of the preventive detention is not to punish an individual for any wrong done by him, but curtailing his liberty with a view to preventing him from committing certain injurious activities in future...The preventive justice requires an action to be taken to prevent the apprehended objectionable activities."

Further, perusing the detention record, the Court noted that the impugned order of detention had been approved by the Government within the time and the detenu had also been informed to make a representation before the Government as well as the detaining authority.

"Perusal of the detention record also reveals that all the material relied upon by the detaining authority while passing the impugned order of detention, has been provided to detenu," the Court added.

Importantly, the Court also underscored that the mere fact that criminal prosecution can be instituted cannot operate as a bar against the making of an order of detention. In this regard, the Court remarked thus:

The Court further averred that if the grounds on which it is stated that the Government was satisfied, are such as a rational human being can consider connected in some manner with the objects which were to be prevented from being attained, then, the question of satisfaction except on the ground of mala fides cannot be challenged in a court.

Significantly, the Court also said that Preventive detention is based on suspicion or anticipation and not on proof and therefore, the responsibility for security of State, or maintenance of public order, or essential services and supplies, rests on the Executive and it must, therefore, have necessary powers to order preventive detention.

Having said that, the Court further added that the subjective satisfaction of a detaining authority to detain a person or not, is not open to objective assessment by a Court.

In the end, the Court also opined that the larger interests of our multi-religious nation as a whole and the cause of preserving and securing to every person the guaranteed freedom peremptorily demand reasonable restrictions on the prejudicial activities of individuals which undoubtedly jeopardize the rightful freedoms of the rest of the society.

"Main object of Preventive Detention is the security of a State, maintenance of public order and of supplies and services essential to the community demand, effective safeguards in the larger interest of sustenance of peaceful democratic way of life," the Court added is it dismissed the petition.