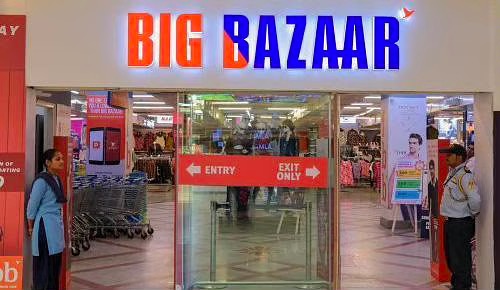 A District Consumer Commission in Maharashtra has directed Big Bazaar, a part of Future Retail Ltd, to pay Rs 1,500 to a customer who was charged Rs 19 for a cloth bag to carry the goods bought at one of its stores. In a recent order, the bench of the Commission comprising its President Nilima Sant, and members Neeta Kankariya and Manjusha Chitlange, also directed the retail chain...

A District Consumer Commission in Maharashtra has directed Big Bazaar, a part of Future Retail Ltd, to pay Rs 1,500 to a customer who was charged Rs 19 for a cloth bag to carry the goods bought at one of its stores.

In a recent order, the bench of the Commission comprising its President Nilima Sant, and members Neeta Kankariya and Manjusha Chitlange, also directed the retail chain to provide details of a personal accident insurance policy for which they had charged the customer.

According to the complaint filed by Ashwini Dhanavat, who is a lawyer by profession, she was charged separately for a cloth bag to carry the purchases she had made at Big Bazaar's Aurangabad outlet on December 17, 2020, after having made payment for whatever she needed to buy. It further alleged that there was nothing on display in the store which informed the customers that they would be required to buy a bag separately to carry the goods they would be buying.

She also alleged that in a different invoice on December 17 and during another visit to the same outlet on December 21, 2020, she was also charged Rs 2.33 and Rs 2.36, respectively, for a 'personal accident insurance' policy. The complaint filed in January 2021 alleged that neither was her permission taken for charging for the insurance policy nor were any details for the policy provided to her.

The complaint, which annexed all the invoices, was filed before the Jalna Commission as that's where the complainant lived.

The Commission's order notes that the respondent Big Bazaar (Future Retail Ltd) failed to appear before it despite a notice from the Commission or file a response contesting the complaint, therefore, the Commission decided to proceed with the case ex-parte.

On the point of personal accident insurance policy, the Commission noted that the invoice itself said that the policy offer was exclusive for 'future pay customers' only, and that the customers would get policy information through SMS "shortly." The Commission observed the complainant had not provided details whether she was a 'future pay' customer or not and did she receive any information over SMS or not, therefore, the Commission refrained from passing any orders on that count. It did direct the outlet to provide all the information to Dhanavat.

On the main issue, however, the Commission relied on a National Consumer Disputes Redressal Commission order against the same party, which had arisen from a case filed before the Chhattisgarh Consumer Commission. The Jalna Commission order notes that the issue involved in that case was similar to the one which was being adjudicated in the current case.

In that order, the NCDRC had noted that all kinds of expenses incurred in order to put goods in deliverable status should be borne by the seller. "We cannot expect that for every single item intended to be purchased by the customer, he needs to carry separate carry bag because customer is not allowed to enter the shop with his own bag. So no option is left except to buy the bag along with goods. By not allowing customer to take own carry bag in shop premises, and thrusting its own carry bag against consideration, the appellant is deficient in providing service and also indulged into unfair trade practice," the NCDRC order stated.

NCDRC had directed Big Bazaar to stop this practice completely.

The Jalna Consumer Commission order also observes that even in that order NCDRC had observed that no adequate prominent notice was given and before making purchase and that the carry bag was sold at the payment counter without giving its specifications after the customer had selected all the goods he/she wanted to buy. "This puts customer to embarrassment and harassment and this practice is unfair and deceptive," the NCDRC order said.

The Jalna Consumer Commission noted that except for providing specifications of the bag in the invoice, everything else remained the same in the current case, and therefore it amounted to deficiency in service and directed that the customer be compensated with Rs 1,500.