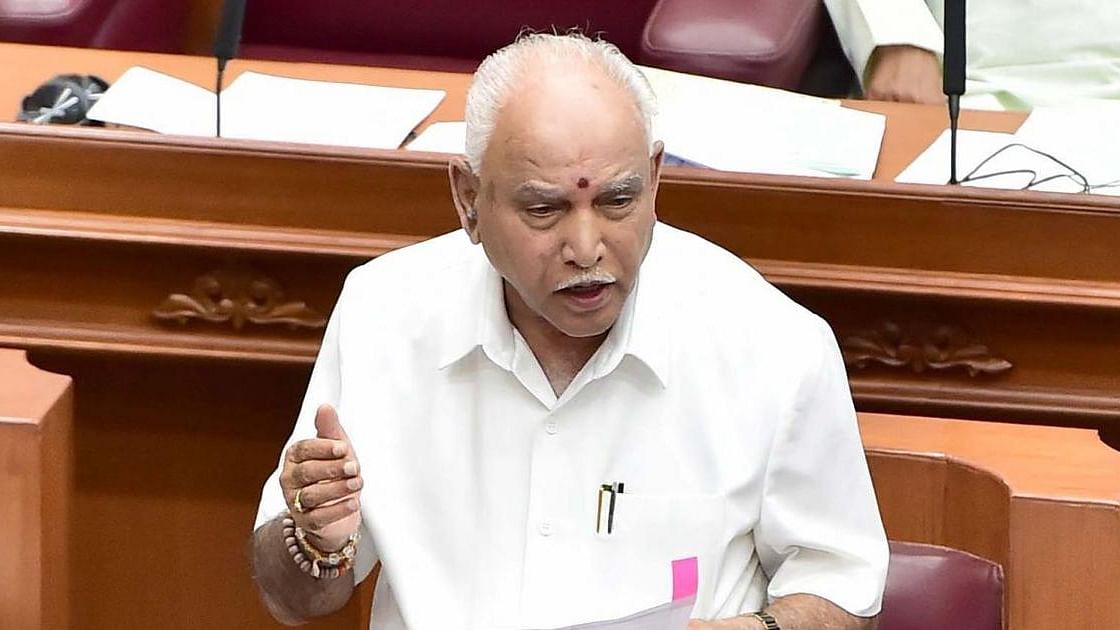 A Special MP/ MLA Court in Karnataka has refused to drop the investigation against Chief Minister BS Yediyurappa in an alleged case of corruption relating to denotification of prime land in Bengaluru in 2006, when he was then the Deputy CM.The Court of Addl. City Civil & Sessions Judge, Shridhar Gopalakrishna Bhat, rejected the 'B' Final Report submitted by the Lokayukta Police....

A Special MP/ MLA Court in Karnataka has refused to drop the investigation against Chief Minister BS Yediyurappa in an alleged case of corruption relating to denotification of prime land in Bengaluru in 2006, when he was then the Deputy CM.
The Court of Addl. City Civil & Sessions Judge, Shridhar Gopalakrishna Bhat, rejected the 'B' Final Report submitted by the Lokayukta Police. It noted that the IO has not applied mind on the relevant matters to be investigated but has proceeded to form an opinion on the basis of "irrelevant and unconnected" materials.
The IO had gone to the extent of investigating the matter with regard to the properties denotified by Yediyurappa during his term as Chief Minister, which was not referred for investigation at all. Thus, it was held that the IO's opinion is untrustworthy and cannot be accepted.
The Court observed,
"Either the I.O. has mis-directed himself in the matter of investigation or conducted the investigation without understanding what is to be investigated. It appears that the I.O. had taken much pain to investigate some unconnected matters relating to the present accused and filed a Final Report for the purpose of filing the same before the Court...The material so collected as stated supra demonstrates that how the I.O. has ignored the material facts during investigation and exhibited his casual approach in the matter of investigation. The entire investigation made by the I.O. is in a perfunctory manner and against the approach of the prudent person."
The Court further noted that even the ADGP concerned did not consider the Final Report properly while approving it to be submitted before the Court. It therefore held,
"In the present case, on independent application of judicious mind to the facts emerging from the 'B' Final Report would prima facie indicate that the I.O. did not conduct the investigation properly as required on the matter referred for investigation so as to thrash out the underlying truth. As discussed in detail, the investigation so carried out by the I.O. appears to be ineffective, incomplete, defective and does not inspire the confidence of this Court. Since the Final Report submitted the I.O. does not instill confidence of the Court, the first option available to the Court to accept the Final Report and to drop the proceedings can not be opted."

The Court has now directed the concerned Deputy Superintendent of Police to investigate the matter further in the light of the observations made in this order and to file Final Report/ Additional Final Report expeditiously, as per law.

On going through the closure report and the documents produced by the IO, the Court noted, "the matters stated in Page No.1 to 49 and Page No.57 to 68 are found to be irrelevant and has no nexus with the allegation made against the present accused. It is very strange to note that the I.O. had gone to the extent of investigating the matter with regard to the properties denotified by the present accused, when he was the Chief Minister, which is not referred for investigation at all."

The court then opined "It appears to this Court that either I.O. has not considered the contents of allegations made against the present accused in the complaint or deliberately mixed up unconnected matters, however for the reasons best known to him."

Finally it concluded by saying "On going through the facts of the present case, complaint averments, documents produced, Final Report filed and nature of the investigation conducted, this court is of the considered view that to unearth the truth and for furtherance /advancing the cause of justice, it is appropriate to direct the further investigation by exercising the power under section 156 (3) Cr.P.C. in the light of the observation made herein above and to file fresh Final Report/Additional Final Report accordingly. Hence, under these peculiar circumstances of the case, this court is of the considered view that it is just and proper to direct further investigation to meet with ends of justice and no other course is left open at this stage. The Investigation Officer shall keep in mind the observations made by the Hon'ble High Court in W.P.No.5043/2019 with regard to the delay in conducting the investigation."

The Karnataka Lokayuktha Police submitted the Final Report under section 173 (2) of CrPC on January 18, 2021, holding that no offence under Section 13 (Criminal misconduct by a public servant) of the Prevention of Corruption Act 1988 appears to have been committed by Yediyurappa.

The complainant, Vasudeva Reddy, opposed the Final Report tooth and nail, saying that Police appear to have intentionally or through neglect, clubbed the materials concerning accused No.1 while dealing with the case against the present accused No.2, though there is no nexus between the same.

A private complaint was filed under Section 200 CrPC, against Yediyurappa and nine other respondents, alleging commission of offences under sections 120(B), 420, 406 of IPC and under section 13(1)(d) of the PC Act. After hearing on the complaint, the Court referred the matter to the Deputy Superintendent of Police, Karnataka Lokayuktha, Bengaluru, under section 156 (3) CrPC for investigation against accused Nos.1 & 2 only. It was stated that there are no concrete materials to proceed against accused No.3 to 10.

Accused No.2 filed a writ petition against the order dated 18.02.2015 seeking to quash the private complaint. The petition came to be dismissed by the High Court by order dated December 12, 2020.

The allegation against the accused was that then he being the Deputy Chief Minister illegally de-notified certain lands acquired for I.T. Corridor lying between Whitefield and Electronic City, Bengaluru, for illegal gain under Government Notification dated 21.06.2006.