CAA Protests: Karnataka HC Says It Will Examine The Legality Of Imposition Of Section 144 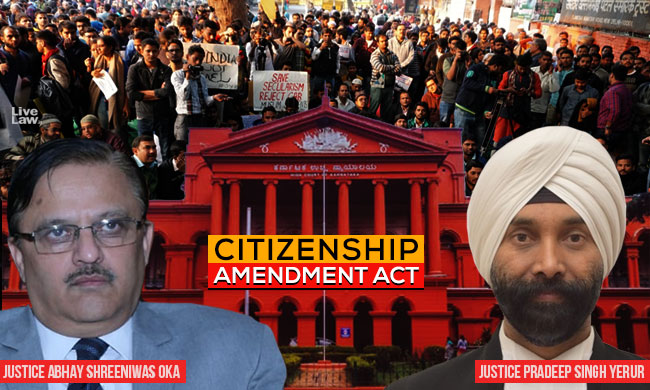 Karnataka High Court on Friday said that it will go into the legality of order passed under section 144, by the Police Commmssioner, on December 18, thereby banning all public rallies, which were to be held on December 19, against the Citizenship Amendment Act, in Bengaluru.A bench of Chief Justice Abhay Oka and Justice Pradeep Singh Yerur while hearing a bunch of petitions challenging the...

Karnataka High Court on Friday said that it will go into the legality of order passed under section 144, by the Police Commmssioner, on December 18, thereby banning all public rallies, which were to be held on December 19, against the Citizenship Amendment Act, in Bengaluru.

A bench of Chief Justice Abhay Oka and Justice Pradeep Singh Yerur while hearing a bunch of petitions challenging the order said;
"We are not concerned with the subject of the protests, our concern is about decision making process which undoubtedly curtails the fundamental rights. It is indeed a preventive measure. The preventive measure has effect of curtailing fundamental rights of citizens. Prima facie, the formation of opinion is not reflected in the order. Therefore these petitions be taken up for hearing at preliminary stage. Issue whether permission granted can be revoked by passing order under section 144 and that also without giving pre-post decision hearing will have to be gone into."
The petitions had by way of interim relief sought to stay the order passed by the Police Commissioner. The bench though said "Permission granted earlier has been worked out as it was for a specific day and time. The order under section 144 will also come to an end tomorrow.
"Therefore by way of interim relief state to consider fresh applications made by organizations or individuals on merits in accordance with law. If such applications are made, same shall be decided within three days from receiving the application. Considering the regulations and citizens rights."
Advocate General Prabhuling K Navadgi who was directed by the court in the morning session to respond to the petitions argued that "State is a custodian of Fundamental rights. If situation warrants duty is of the state to take preventive measures to maintain law and order. The police commissioner based on intelligence inputs from different quarters and after he was satisfied that such order was necessary as possibility of anti social elements participating in the peaceful protest. This extreme measures was taken."
He also argued that "Section 144 is an exception to general powers vested in the police. Intelligence reports strongly indicated these protest could turn into law and order situation. Uncontrollable situation has taken place in Mangaluru, where two people have died. Reports were also there that people from Kerala have infiltrated into the state. What is the final concern of the state is safety of public property. The Chief Minister has held meeting with members of the Muslim and Christian Community and also appealed to citizens to maintain peace."
Earlier in the day, Justice Oka had raised objections to the section 144 order. He said that "Are you (state) going to ban each and every protest. How can you cancel permission granted following process by passing a speaking order." The bench had also questioned the state by saying that "As far as law is concerned you cannot prohibit peaceful protest. Can state proceed on the assumption that every protest will be violent."
Senior advocate, Ravi Verma Kumar appearing for one of the petitioner, Leo Saldanha and others, had argued that "The order passed is arbitrary and ex-facie illegal as there is no formation of opinion. Police can only regulate the rallies/dharnas or processions they cannot prohibit protest, it is a Fundamental Right of Citizen, guaranteed under article 19 of the Constitution of India."
The state is directed to file their objections by January 6, the next date of hearing is January 7, 2020, when an early date for hearing will be fixed.
Click Here To Download Order
[Read Order]
Next Story
Similar Posts
+ View more
Webinars
+ More
Law Firms
+ More
Latest News
+ More
लाइव लॉ हिंदी
+ More
International
+ More
Environment
+ More