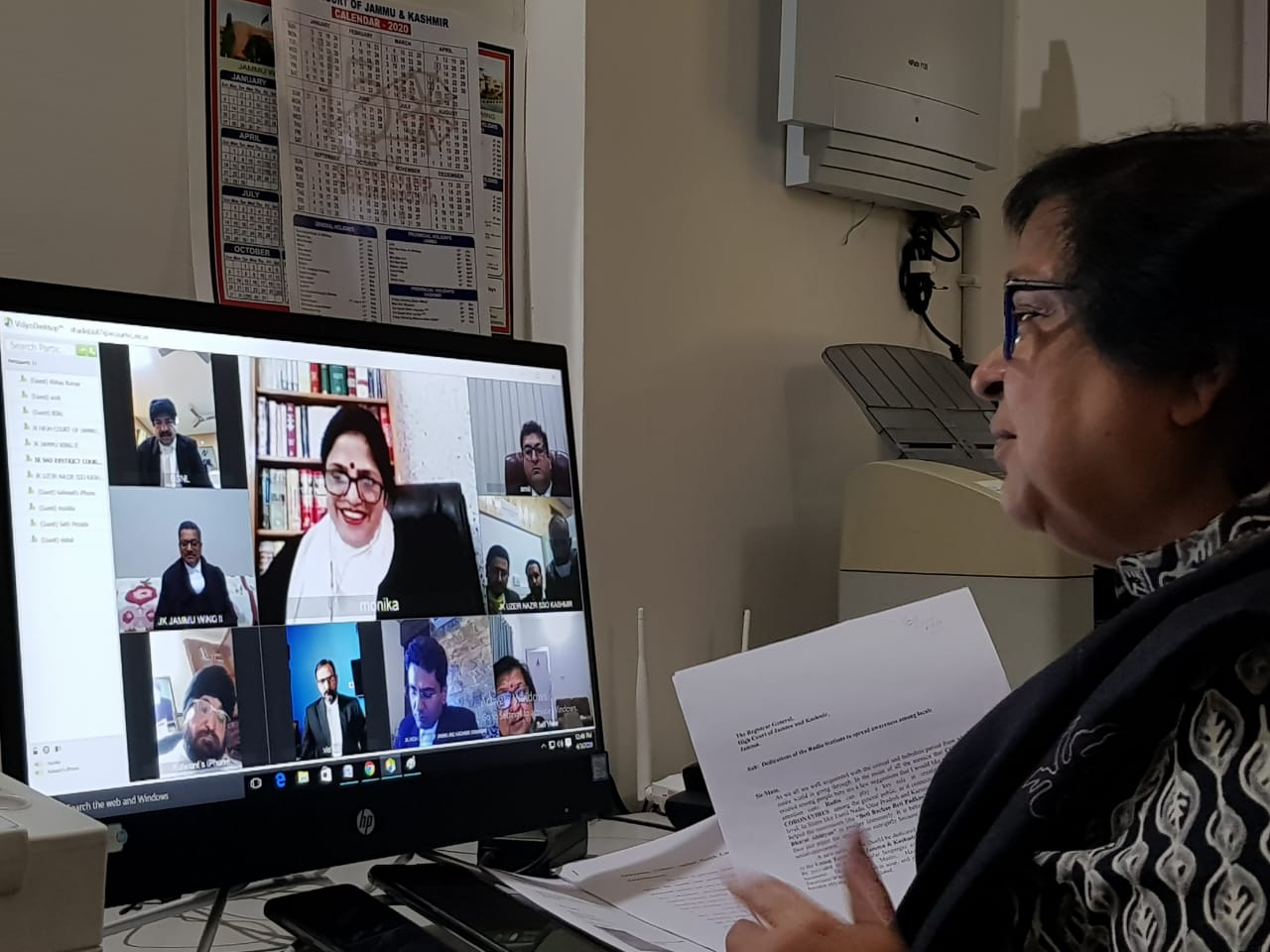 The Jammu And Kashmir High Court on Friday dealt with a batch of petitions and passed various orders regarding several issues of governance during the nationwide lockdown. A Bench comprising of Chief Justice Geeta Mittal and Justice Rajnesh Oswal conducted the proceedings via video conference. Details regarding those orders are as follows:-The Bench suggested that associations of...

The Jammu And Kashmir High Court on Friday dealt with a batch of petitions and passed various orders regarding several issues of governance during the nationwide lockdown.

A Bench comprising of Chief Justice Geeta Mittal and Justice Rajnesh Oswal conducted the proceedings via video conference. Details regarding those orders are as follows:-

The Bench suggested that associations of healthcare professionals could nominate some of its members who are well versed with the ground realities and requirements for relief thereof to join in discussions with the authorities to jointly take decisions for dealing with the crisis presented by the outbreak of COVID-19. The Secretary of the Department of Health and Medical Education has been directed to consider these suggestions and inform the Court of its decision.

Further, addressing the contingency that the personnel engaged in the treatment of COVID-19 patients are working well beyond their scheduled hours, the Bench asked the administration to consider keeping canteens and kitchens in all medical institutions open 24 hours to ensure necessities are always available to these personnel. It was also suggested that the involvement of NGOs and citizen volunteers could be considered. The Secretary of the Department of Health and Medical Education is now to consider these suggestions and take steps accordingly.

This concern of providing basic essentials was extended to the families of the healthcare personnel by the Court, which recorded that "in order to ensure the full attention of the personnel addressing COVID-19 issues, it is necessary that they be kept free of any personal tensions and needs." So to ensure the optimum response of people addressing COVID-19 issues, be it healthcare personnel, government personnel or other officials so engaged, it was suggested that a body or a network of people be created to attend to the needs of family members or dependents of these personnel. The Secretary of the Department of Health and Medical Education has been directed to file a report on the action taken in this regard.

The Court then emphasized on the need to prepare the public for the removal of lockdown restrictions. Though it cannot be said what the situation will be around April 14 (the last scheduled day of the lcokdown), the Court asserted that information regarding permissible conduct in case of any removal of restrictions must be disseminated forthwith.

"It is therefore imperative to prepare the public about the permissible conduct upon removal of the restrictions (partial or complete); progression of the COVID-19 virus infection and life of the virus; possibility of carriers existing and infecting despite the lockdown and all related information…It is essential that widespread dissemination of the above information using all mediums as are available." In this light, the Secretary, Health and Medical Education Department Secretary, Social Welfare Department, Director, Information Department and Member Secretary, JK State Legal Services Authority were directed to immediately take appropriate steps towards the same, and the action plan be submitted to the Court by the Director of the Information Department.

Moving on, in light of several complaints over safety measures provided to healthcare professionals, the Department of Health and Medical Education has been asked to apprise the Court of the availability of personal protection equipment for the safety of all healthcare workers.

Taking up the issue of decongestion of prisons, as per the suo motu cognizance taken by the Supreme Court, it is informed that an order of the High Power Committee notifying the 'Jammu and Kashmir Suspension of Sentence Rules, 2020' has been received by the Court. In furtherance of the same, the Court has directed these rules, on categories of prisoners to be released on parole and the manner in which the same is to be executed, to be implemented at the earliest. To facilitate the same, it has been directed that steps to ensure special parole to prisoners must be taken on a priority basis and the orders must be complied with by the District Courts. Before the next date, the Court has sought a compliance report from the Member Secretary of JKSLSA. The Court has further asked the High Power Committee to view with urgency some aspects that have been raised as allegedly overlooked in this regard. With regard to residents of Jammu&Kashmir and Ladakh who are lodged in prisons in other States, the Additional Advocate General has been directed to file a report on their condition before the next hearing.

Addressing the issue of safety and violence faced by healthcare professionals and establishments, the Court notes that these are matters which "would need critical attention of the Central Government as well as the Governments of Union Territories of Jammu and Kashmir and Ladakh…We may note that it is only after appropriate legislations has been put in place that the aspect of its enforcement would also require to be strictly monitored." In its order, the Court has recorded that a Draft Bill on violence against the healthcare professionals and establishments was released by the Ministry of Health and Family Welfare on 8th March 2019 but did not result in a law. It further notes that 19 States have enacted their own specific laws in this regard. Owing to the importance of the issue, a copy of the order is to be placed before the Home Secretary and Secretary of Ministry of Health and Family Welfare of the Central Government, in addition to the Secretaries Home and Secretaries Health and Medical Education of the UTs of the Jammu and Kashmir and Ladakh.

The Secretary, Health and Medical Education has been directed to examine the probable impact of implementing a recent High Court order directing the felling of certain Poplar trees. It has been argued that pollen/seeds, released by Poplar trees, would remain in the air for many days wreaking havoc by causing respiratory diseases. If on examination, this is found to be correct, immediate remedial action is to be taken.

The Bench stated that it would examine a report about the status of the provision of permanent infrastructure for Juvenile Justice Boards and Observation Homes "after the current crisis ends". In the meantime, it was directed that the facilities be maintained efficiently.

Taking up a matter involving the welfare of an Indian, Gurkirat Singh Sekhon, in USA the Court noted that a detailed report of the action taken by the Indian Consulate at New York had been received from the Ministry of External Affairs (MEA). This report contained the steps taken for the safety of Indian nationals abroad along with the proposed plan of action depending on change of situation. Satisfied with the same, the Bench was pleased to record its appreciation for the efforts of the MEA. "We have no manner of doubt that the Ministry of External Affairs, New Delhi is deeply concerned with the safety and well-being of all Indian nationals abroad and is doing its utmost possible to ensure the same… We would fail in our duty if we do not record our deep appreciation for the tremendous efforts of the Indian Consulate in New York City and the Embassy of India at Washington DC as also the Ministry of External Affairs, New Delhi in prioritising and addressing all concerns of Indian nationals who are in the United States of America."

Apropos a plea regarding pilgrims stranded at the Vaishno Devi Shrine in Katra, the lawyer for the shrine submitted a report informing the Court that 400 stranded pilgrims from Bihar were camping at a temple opposite the railway station in Jammu, and not in Katra anymore. It was further informed that their boarding and lodging was being looked after by the district administration, that the Shrine Board was in touch with local administration to ensure the pilgrims' well-being and that a 600 bed facility had been provided to the district administration free of cost at Katra to serve this purpose. Satisfied with this, the Court decided that no further action on its part was required and disposed off the matter.

A report regarding video conferencing facilities in the Court was directed to be forwarded to the Registrar (IT) for examination. The Bench will look into this issue on the next date of hearing.

Given that authorities face difficulties in identifying those who have come in contact with COVID-19 infected persons, the Court emphasized the 'imperative need' for information of public gatherings to be readily available to authorities. In this light, concerned authorities were urged to consider "the feasibility of installation of CCTVs with or without online access to monitor such gatherings.