COVID-19- "This Is A War Like Situation, Additional Stretchers Should Be Procured For All Those Who Need Treatment": Madras High Court 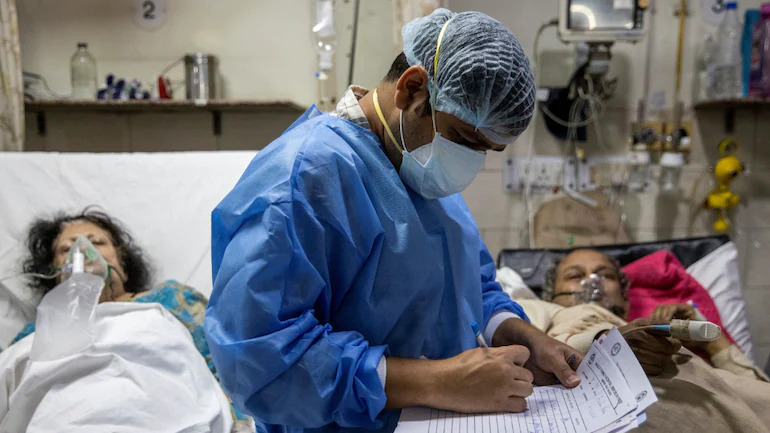 Underlining that this is a war-like situation where treatment has to be afforded to all who need the same, the Madras High Court on Tuesday (May 13) directed that additional stretchers by government hospitals be procured to house patients in corridors and other places available. The Bench of Chief Justice Sanjib Banerjee and Justice Senthilkumar Ramamoorthy today again took up...

Underlining that this is a war-like situation where treatment has to be afforded to all who need the same, the Madras High Court on Tuesday (May 13) directed that additional stretchers by government hospitals be procured to house patients in corridors and other places available.

The Bench of Chief Justice Sanjib Banerjee and Justice Senthilkumar Ramamoorthy today again took up its own-motion petition relating to monitoring the COVID-19 response in the state of Tamil Nadu & Puducherry.

The Court noted that there is a shortage of vaccination in the State and that, though a decision had been taken to call for a global tender, the allocation otherwise to be made by the Centre to this State should not be diverted in the wake of the State's decision to call for a global etc. tender, particularly as it may be a long-drawn process.

The Court note that at the moment, there does not appear to be much hue and cry over the non-availability of drugs, especially since the craze for Remdesivir has gone down with the public at large being aware that it may not be a life-saving drug but of limited efficacy.

The Court noted that Puducherry reported that there was sufficient supply of oxygen, though the number of beds in Puducherry needs to be augmented.

Perusing the detailed report pertaining to Puducherry, the Court said,

"It speaks of teams of doctors having been set up who visit patients for advising them whether they need hospitalisation or further assistance or be allowed to recover in home conditions. Puducherry has also reported camps, including mobile camps, conducting tests away from government hospitals and at various centres. There appears to be sufficient supply of vaccines left, even after the second dose is to be administered to those who have got the first."

Importantly, the Court noted that by and large, things appeared to be under control, however, to ensure that there is the prevention of a large number of cases in future, the Court directed,

"Immediate steps need to be taken to accelerate the rate of vaccination, including creating awareness among sections of people, particularly in the non-urban areas, of the need to take the vaccine to protect themselves."

The Court also directed that every endeavour must be made by the State and even in the Union Territory to ensure that abandoned or disused places be converted into make-shift hospitals to augment the number of beds available for Covid patients.

Lastly, noting that there are some murmurs regarding hefty amounts being demanded at some places for release of dead bodies and that elsewhere in the country, there are reports of persons at the crematoria demanding more money to cremate the Covid dead, the Court said,

"The common person also feels the burden of additional cost at private hospitals when no place is available at government hospitals. In addition to the rather satisfactory work taken up by the State Government, these areas should be monitored so that the common man is not burdened any further."