'It Would Be Impossible To Deal With Infection On Track' : J&K HC Directs Shrine Board, Govt To 'Urgently Decide' On Amarnath Yatra 2020 [Read Order] 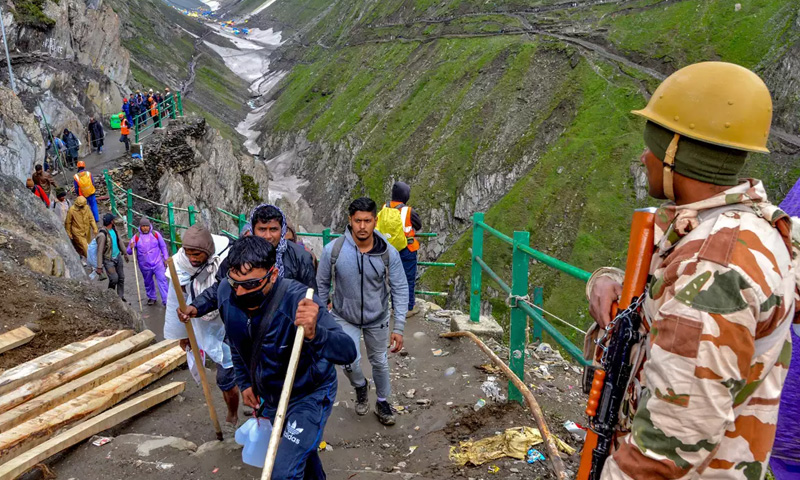 The J & K HC on Tuesday required the Shri Amarnath Shrine Board and the UT government to urgently take all decisions regarding the conduct of the Amarnath Yatra, in compliance of the top court's decision of July 13, taking into consideration all the relevant issues as also the several concerns.

A division bench of Chief Justice Gita Mittal and Justice Sanjay Dhar specified that the decision shall ensure compliance of all healthcare protocols, Standard Operating Protocols notified by the Central Government as well as by the Union Territory of Jammu & Kashmir, guided by the principles laid down by the Supreme Court of India that the right to health of every person has to be placed at the highest pedestal.

Besides, any such decision taken must address the concerns of the health of the security personnel, healthcare personnel, priests, the Yatris and of the officials who would be involved in the arrangements and conduct of the Yatra as also the residents of the Union Territory of Jammu & Kashmir.

At the same time, the Board is directed to ensure consideration of the welfare and support of all persons, especially the members of the communities, particularly the Bakkarwal community, who provide the porterage/ pithoos, palkis; mules and horses and who provide services on the Yatra.

The bench observed that movement on the Yatra track, even without the pandemic, situation is a challenge at any point of time, even for the able bodied and the healthy. It appeared to the court that it would be impossible to deal with infection on the track.

"Movement on the Yatra track even without the pandemic situation is a challenge at any point of time. It challenges even the able bodied and the healthy. It appears that it would be impossible to deal with infection on the track. The respondents have themselves explained the difficulties which the mortalities on the route would provide", the bench observed.

The Supreme Court had earlier refused to entertain a petition seeking to stop the Yatra, observing that it the local administration was better equipped to take a decision on the same.

In as much as it was urged before the High Court that the Supreme Court had last month permitted the Jagannath Yatra in Orissa, the division bench opined that it must be cognizant of the stark difference in the two Yatras.  Whereas the Yatra at Puri is in the heart of a main city, the Shri Amarnathji Yatra is over extremely difficult terrain, undertaken on a rough and narrow hilly track at extremely high altitudes.

"The orders of the Supreme Court manifest that though the Lord Jagannath Yatra was permitted, however members of the public were not allowed to participate and declaration of strict curfew in the town was directed. This Yatra was a single day event. As against this, the Shri Amarnathji Yatra envisages continuous visits by yatris from allover the country to the Anantnag District over a period of time. The other pressures on account of security, fragility of the facilities, vulnerabilities on account of geographical and topography features did not arise in Odisha", noted the High Court.

Besides, the bench observed that the Government of Union Territory of Jammu and Kashmir has itself elaborately explained the several limitations on the existing medical system to cope with the pressure which the conduct of the Yatra would impose on the available facilities.

"Even if adequate facilities could be created, the Government has expressed the huge challenge posed for isolation of the suspected COVID-19 patients as well as those found infected on the route of Yatra. Not only isolation facilities but also diagnostic facilities would be required to be set up all along the route", the bench said.

The attention of the bench was drawn to the threat to the health and lives of the defence forces, security personnel and police on account of exposure to the reasonable possibility of COVID-19 infected persons who may join the Yatra, perhaps unaware that they are infected as they remain asymptomatic.

The Court also was alive to the fact that the elevation and lack of space along the Yatra route would compel close contact of those detailed on security duties with Yatris from different parts of the country, exposing all of them to the grave possibility of COVID 19 infection.

The status report of the government on record showed that no significant medical facilities are available in District Anantnag at any point of time- "Certainly, the District does not have the capacity to deal with the added pressures on account of the deluge of yatris from different parts of the country"

The status report dated 10th July, 2020, has clearly stated in para 12 that the situation in the Union Territory is grim and the annual Yatra requires to be curtailed both in number and duration in the interest of justice, safety of human lives and healthcare of the human life at large.

"In para-6 of the status report, the respondents have disclosed that the camping facilities, which were being used for accommodating the yatris earlier especially at the entry point, are being used as quarantine centres. So clearly, the respondents do not have any residential facilities for the yatris and certainly no facilities for quarantining the yatris who have mandatorily to be quarantined in terms of disclosure made in para-6 of the status report", the Court noted in the order.

The bench further noted from the status report that the Government of the Union Territory of Jammu & Kashmir has issued orders restricting movements in the red zones; that temples, other religious places and spiritual centers are still not allowed to open, and that even the Shri Mata Vaishno Devi Shrine at Katra is not open to the pilgrims.

Besides, various yatras in different parts of India on account of Covid-19 have been suspended, including even the Kaweriya Mela/Yatra, and the Sh. Jagar Nath Puri Yatra held once in 12 years, which was curtailed and held under curfew in the city.

Still, the bench acknowledged that the apex court had held that the issue must be left within the competence of the local administration.

"We are bound by the parameters of the jurisdiction laid down by the Supreme Court", asserted the bench.

It took notice that an order dated 22nd April, 2020 passed by the Shri Amarnath Shrine Board cancelling the Yatra which was subsequently recalled- "It appears that the Yatra was cancelled because there were 77 hot spots/ red zones in Kashmir along with the route through which the yatra passes".

The bench was alive to the fact that even as per the status report of July 20 also, the matter of making arrangements has not moved so much.

"According to the petitioner, the "Pratham Pujan" to invoke the blessings of Lord Shiva is undertaken by the Shri Amarnath Shrine Board every year at Chandanwari,Pahalgam, South Kashmir. However, on account of the pandemic, this year it was performed on the 5th June, 2020 at Jammu by the Shri Amarnath Shrine Board. This Pujan marks the commencement of the Yatra. We are informed that keeping in view the difficulties posed this year on account of the pandemic the Pujan was not performed at its usual place and the Yatra has still not commenced", recorded the bench.

Noting that the decisions regarding the conduct of Yatra are being taken by the Shri Amarnath Shrine board, which is chaired by the Lieutenant Governor of the Union Territory of J&K, the HC required that copies of the application before it; the Status Report dated 10th July, and this order along with all other relevant material are immediately placed before the Board for its consideration.

"Consideration would also need to be accorded to the welfare of the animals (mules, horses, ponies etc.) involved in the Yatra and measures needed for the same", said the bench.

The J & K HC clarified that in case the decision taken is contrary to the parameters laid down by the Supreme Court in the judgment dated 13th July, it shall be open to the applicant to invoke the appropriate remedy in accordance with law.

The Shri Amarnathji Yatra for the year 2020 was scheduled to begin on the 23rd June (Skandshasthi) and to continue till 3rd August (Shravan Purnima).