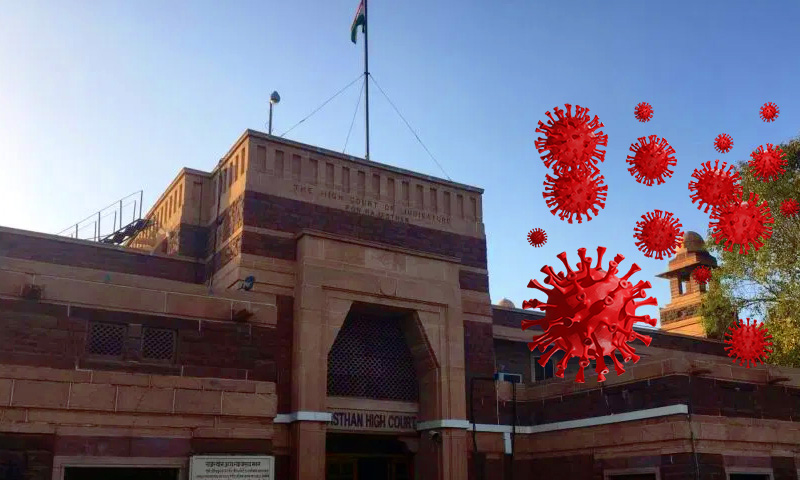 Hearing the letter plea filed by the Rajasthan High Court Bar Association highlighting the plight of Covid patients and the situation arising out of shortage in hospitals into a PIL, the Rajasthan High Court on Wednesday (April 28) formed State Level and District Level Committees to alleviate the difficulties being faced by the general public at large in the State of Rajasthan.The Bench of...

Hearing the letter plea filed by the Rajasthan High Court Bar Association highlighting the plight of Covid patients and the situation arising out of shortage in hospitals into a PIL, the Rajasthan High Court on Wednesday (April 28) formed State Level and District Level Committees to alleviate the difficulties being faced by the general public at large in the State of Rajasthan.

The Bench of Chief Justice Indrajit Mahanty and Justice Inderjeet Singh expressed its expectation as well as confidence that the committees set up by it would supplement the efforts being made both by the Union of India as well as the State of Rajasthan in the matter of providing medical aid to the people of the State.

It was also submitted that not only is there great pressure on the medical infrastructure in the State for the treatment of patients, but the entry of attendants into the medical facilities has also led to great difficulties being faced by the COVID warriors and doctors in treating the patients.

Importantly, it was submitted that in government hospitals no death had yet occurred due to shortage of oxygen and presently adequate medicines were available in the State.

The convenor of the committee shall be the Secretary of the State Bar Council, Rajasthan.

The aforesaid Committee has been directed to set up Emergency Assistance Cells at Jodhpur/Jaipur State Bar Council offices and the Help-Desk shall be manned 24 hours and an adequate number of telephone/cell numbers be provided for operation of the helpline number.

State Bar Council has been directed to take steps to depute such a number of personnel, as required to attend the calls and it was also directed that such emergency helpline numbers would be widely publicized, both in the Print and Electronic Media in order to make the public aware of the assistance available at hand as well as to instill confidence in them during the present pandemic situation.

The offices of the committee shall have to regularly inform and contact the various officials appointed by the State and/or Municipal Bodies and/or Health Authorities to make available necessary medical assistance, such as ambulance, hospitalization and medical care, etc., as may be needed by the people referred to by the committee.

Similarly, District Level Committees have been directed to be formed at all District Headquarters except Jodhpur and Jaipur and the said committees shall consist of the following:-

The District Level Committees have been directed to establish Help-Desk at the district level at the DLSA office having necessary manpower. They have also been directed to issue necessary directions to all officials of the State and Municipal and Health Authorities, who have been vested with the duty to take care of COVID patients during the present pandemic, have been directed to respond immediately to the request sent by such committees and keep a record of all steps taken in regard to the treatment of referred patients.

"We hope and trust that the committees formed by us will take all necessary steps to alleviate the difficulties being faced by the general public at large in the State of Rajasthan and act as a bridge with the authorities created by the State for the purpose of dealing with the present COVID pandemic."

The State Level Committee has been directed to obtain reports from all the District Level Committees and submit such reports before the Court on a fortnightly basis.

The Court further directed the Health Secretary of the State to monitor all the district hospitals/COVID dedicated centers on a daily basis so that the requirement of these hospitals with regard to drugs, oxygen, and injections be meted out and utilized properly.