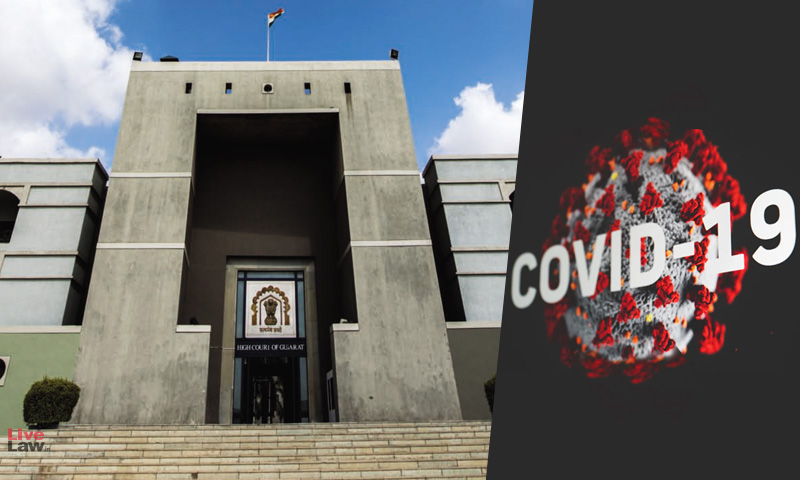 A Bench of Chief Justice Vikram Nath and Bhargav D Karia of the Gujarat High Court today resumed hearing of the suo motu proceedings initiated by the Gujarat High Court to take stock of the surge in COVID-19 cases in the state of Gujarat. During the hearing, the Court called for additional information on two aspects, -A district-wise split-up of testing facilities, capacity, how...

During the hearing, the Court called for additional information on two aspects,

Additionally, the Court clarified its suggestion from last week wherein it had stated that the Court's halls and academy could be used for quarantine. The Court made clear that the buildings could be used only for non-covid infected persons whose family members/others were infected with covid, as a result of which they could not stay at their homes.

In the course of the hearing, the Government Pleader orally opined that when people sought hospitals for the treatment of COVID-19, they were insisting on treatment in certain hospitals.

"Preference for certain kinds of hospitals, they are not ready to go wherever it is available (availability when I say cooperation) it may be a distance from your residence, it may not be in your vicinity, you may have to travel for a hour and a half wherever available. We are noticing that there is a lot of reluctance in going into every available (hospital). I am getting requests for particular hospitals..," the Government Pleader said.

Government Pleader Manisha Lavkumar was responding to a query from Chief Justice Vikram Nath on the availability of hospital beds for the treatment of COVID-19 patients.

The Government Pleader observed that the occupancy rates could be high among private hospitals where the government had no control over the availability of beds. She then made the observation that people were insisting on treatment in certain hospitals.

The Court said, "That cannot be … If you insist for a particular hospital, you can find it yourself… The govt are providing beds, choice cannot be .."

After the Gujarat Government tabled a detailed affidavit in Court, Government Pleader Lavkumar took the Court through measures described in the affidavit.

The State in Court submitted that RT-PCR testing was there in every district, and that the RTPCR test was taking place either through the PCR machine or the TruNat or CB-Nat machines.

"RTPCR testing is being carried out in all districts, I make a categoric statement", the Government Pleader told the Court.

Additionally, the State was in talks with Universities that possessed PCR Machines to carry out tests.

The Government Pleader averred that an upper limit of 1,73,000, with 1,65,000 on average tests were conducted as of the date of the affidavit, against the 1,45,000 number presented at the last hearing. Upon a query from the Court, she clarified that 70,000 of the tests were RTPCR. The Government's employees themselves were going to help private labs with their testing if they so requested it, she submitted in Court.

The Government Pleader additionally asserted that testing facilities were present in the Tribal Belt as well, and in many places there were TruNat and CBNat machines presently. She additionally submitted that the state was committed to bringing in RTPCR machines.

She informed the Court additionally that it was not feasible for the government to set up RTPCR machines in every taluka or nagarpalika because the machines were highly sensitive and could be set in place only in place that had the facilities required for its maintenance and upkeep.

Testing was taking place at 2518 per million against the national testing rate of 982.5 per million, the Government Pleader informed the Court.

"At all stages transparency is there, at no stage are we trying to show that more is being done than is actually being done...," she said.

On Remdesivir and Oxygen

Stating that the supply of Remdesivir was bound to be short since only a lakh of vials was being manufactured initially, the Pleader stated,

"When supply is short, usage needs to be very careful, very circumspect in the manner in which we use it".

She informed the Court that more than 2 lakh vials were being manufactured, with another 55,000 vials being received after the Central Government decided to stop exports of Remdesivir.

The Government Pleader additionally told the Court that Remdesivir injections were being distributed in order of priority, first to government centres, government-affiliated centres, nursing homes etc.

On an average 20,000 were being distributed in order of priority, she said. A decimal small number was retained for emergency, she additionally stated.

"we do not retain any number, we give away", the Government Pleader said.

All collectors are directed to come up with helpline numbers and control rooms for facilitating better procurement and easier procurement, the Government Pleader submitted.

On Oxygen supplies, she submitted that Collectors and Commissioners were directed to take over hospitals with Oxygen supplies to ensure there was maximum infrastructure. An additional notification directing that 70% of Oxygen manufactured in the state be transferred to healthcare. Industries that used Oxygen have been directed to halt operation, she said.

In his response, Senior Advocate Percy Kavina raised a query on how the state government had to asked industries to halt production of oxygen, except for making a request to the effect. No point relying on kindness of heart, he said.

On the question of the demand for oxygen, the Government Pleader stated that there was a demand of 1050 metric tonnes as against capacity of 1100 metric tonnes, she said. "We have sufficient", she submitted.

Additionally, cylinders in hospitals were taken up and oxygen extracted for use in five major hospitals, so as to make it self-sufficient, she additionally stated.

Senior Advocate Percy Kavina, appearing for the Gujarat High Court Bar Association, responded with a question on how supplies of oxygen were to be made available for homecare.

"What modalities are there for state government to administer Oxygen supply to homes for homecare..Homecare is an important part..", he contended

The Court said, "Central (108 helpline) goes by first come first serve it does not take care of the condition of the patient, so even if patient is critical as per queue it may come in the morning, night, after 8 hours, 12 hrs, or 6 hours..So that is one thing that you need to verify. If that is correct that is not serving the purpose."

The Government Pleader submitted that a team assessed every 108 call and followed-up, with patients accommodated as and when there was availability in hospitals.

The Court also expressed concern at reports that designated patients were not being admitted to designated hospitals without being transported on a 108 ambulance.

The Government Pleader admitted that there could be a time lag as the helpline was getting hundreds and thousands of calls.

On Infrastructure and occupancy of beds

"While we consider for hospitalisation, we are going symptomatically, we are not even demanding an antigen test or HRCT scan, they are admitted in (COVID) suspected category, thereafter in civil hospitals".

She again said, "No patient is turned away on ground of no test".

She explained that there were three kinds of facilities Dedicated covid hospital for critical patients, Covid healthcare centre for patients with minimal symptoms/asymptomatic patients, and Covid care centres.

While many districts' hospitals were fully occupied, percentages of other hospitals were unoccupied. When the Court asked the Government Pleader why this was so, she responded opining that many preferred specific hospitals.

She additionally informed the Court that they were assuring oxygen facilities for all beds to the extent possible.

The Government was emphatic in her stance that all measures were being taken to communicate all information regarding Remdesivir and other information from the highest levels and that information was being collected from the ground.

Admitting difficulty in updating a real-time picture of the situation in the state on the Gujarat COVID-19 dashboard, she stated that the same would be updated thrice a day, with the aim being to update it real-time.

"Let me assure the Court that all efforts are being put in by the entire machinery … we are leaving no stone unturned," the Government Pleader stated.