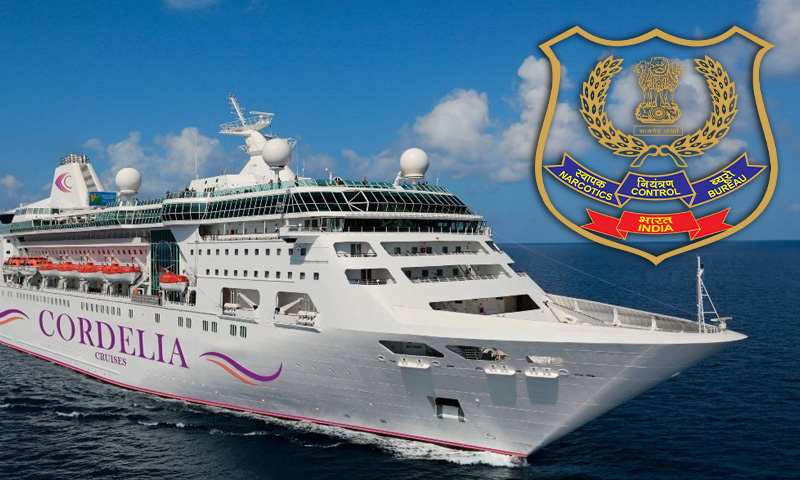 The Narcotics Control Bureau has opposed independent witness in the Cruise Ship Drug Case - Sonu Mhaske's claims of being threatened to sign on a blank panchnama. Aryan Shah Rukh Khan is one of the accused in this case. The agency sought dismissal of Mhaske's plea before the Special NDPS Court in Mumbai seeking to take cognisance of his affidavit in which he has levelled allegations...

The Narcotics Control Bureau has opposed independent witness in the Cruise Ship Drug Case - Sonu Mhaske's claims of being threatened to sign on a blank panchnama. Aryan Shah Rukh Khan is one of the accused in this case.

The agency sought dismissal of Mhaske's plea before the Special NDPS Court in Mumbai seeking to take cognisance of his affidavit in which he has levelled allegations against the NCB and its officers.

The agency stated that investigation of the case is still in progress and the charge sheet is yet to be filed. "Thus, the relevance of such affidavit will arise at the time of trial and not at this primary juncture when the investigation is at an initial stage and is going. Thus, such prayer if allowed would cause grave prejudice to the ongoing investigation," the plea said, adding that the court "ought not to hold a mini-trial at this stage."

Significantly, after allegations of corruption surfaced against NCB and then Zonal Director Sameer Wankhede, the case's investigation was transferred to a Special Investigation Team (SIT) in Delhi.

Mhaske has alleged that he was working as a facility manager in building Lake Lucerne when he received summons from NCB and was asked to sign the paper under threat of false implication in the criminal case and arrest for non-cooperation.

In today's reply filed before the special court, the NCB called Mhaske's plea "misconceived" and "ill-conceived." The agency contended that contents of Mhaske's affidavit are completely false, mischievous and misleading with a malicious attempt to malign and tarnish NCB's image.

The agency claimed that there was no substance in Mhaske's claims that he was forced in the panchnama under threat. Such an application would tantamount to interfering with an on-going investigation ought to be rejected, "else this will open a pandora's box flooding this Hon'ble Court with such applications which are neither tenable nor entertainable."

After the SIT took over investigations into the case, the agency claims that Mhaske was issued summons under section 67 of NDPS Act 1985 for recording his voluntary statement. By not honouring the summons, he was causing hurdles in the ongoing investigation.

"If such Application is allowed, it will have far-reaching ramifications and will set adverse precedents for other matters."

"It is prayed that the application of the present Applicant is devoid of merits and hence be dismissed with costs and direction may be given to the applicant to appear before the SIT team for recording of his voluntary statement in response to the summon issued to the applicant."

The NCB arrested Khan on October 3, along with several others following an alleged drug bust where the Cordelia Cruise Ship was docked. While nothing was recovered from Khan, his friend Arbaaz Merchant was allegedly found in possession of 6gms of charas and 5gms of hashish was reportedly retrieved from Munmun Dhamecha.

They were booked under Sections 8(c), 20(b), 27, 28, 29 and 35 under the Narcotic Drugs and Psychotropic Substances (NDPS) Act. They were granted bail later the same month.

While there are a total of 20 accused in the case, 19 are now out on bail.

It may be noted that earlier, Prabhakar Sail, another panch witness in the case, had made startling allegations about extortion and pay-offs involving KP Gosavi (a private person at the NCB raid whose picture with Aryan Khan went viral even before he was formally arrested), the investigating officer and NCB Mumbai Zonal Director Sameer Wankhede and others, in a notarized affidavit.

Sail, claiming to be KP Gosavi's personal bodyguard, had alleged that he was called to the NCB office and was asked by Sameer Wankhede to sign as a panch witness in the case and his signature were taken on 10 blank sheets of paper.