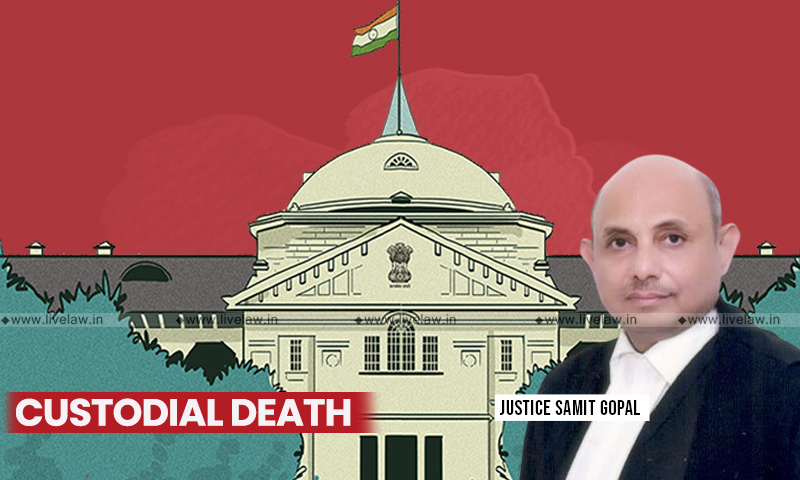 "Custodial violence, custodial torture and custodial deaths have always been a concern for civilized society," observed Allahabad High Court today as it denied bail to a policeman who has been booked for causing custodial death of a man in the year 1997. Denying him bail, the Bench of Justice Samit Gopal further noted that the judicial verdicts of the Apex Court and other Courts...

"Custodial violence, custodial torture and custodial deaths have always been a concern for civilized society," observed Allahabad High Court today as it denied bail to a policeman who has been booked for causing custodial death of a man in the year 1997.

Denying him bail, the Bench of Justice Samit Gopal further noted that the judicial verdicts of the Apex Court and other Courts have shown their concern and anguish in such matters.

On December 28, 1997 at about 04:00 AM, a person (name not known) came along with the Sub-Inspector, Police Station Kotwali, District Shahdol, Madhya Pradesh and other police personnel of the said Police Station including the present applicant to the house of the first informant (the son of the deceased) and they forcibly caught hold of the deceased and while assaulting, took him inside the Jeep, and took him away.

The first informant (son of the deceased) went to Police Station Phoolpur and to different Police Stations in District Varanasi to know the whereabouts of his father but he could not know anything.

Subsequently, on March 2, 1997 at about 08:00 AM, a police constable from Police Station Phoolpur came and told him that a wireless message was received from Shahdol PS that his father has died due to heart attack.

When he reached Shahdol, he got to know that his father was brought from Varanasi to Police Station Kotwali, District Shahdol by the police personnel including the applicant before the Court and they mercilessly and inhumanly assaulted his father due to which his father died in the Police Station itself.

When all the police stations and police officials refused to register an FIR in the matter, the first informant filed an application under Section 156(3) Cr.P.C. before the Chief Judicial Magistrate, Varanasi and the investigation began in the matter as FIR was ordered by CJM.

A final report was filed in 1998, a protest petition was filed by the applicant in 2001, which was accepted in 2007 by the lower court, rejecting the final report and summoning the accused persons for offences under Sections 364, 304, 506 IPC.

Thereafter, the first informant moved the Apex Court in 2018 and hearing the matter in 2020, the Court vacated the Allahabad HC order of 2007 passed in the 482 Cr.P.C. petition and directed the Chief Judicial Magistrate, Varanasi to proceed with the matter in accordance with the law.

Thereafter, the accused and co-accused filed for and got pre-arrest bail from the High Court, however, challenging the said orders, the First informant again moved the Apex Court and finally, the Supreme Court in May 2021 set aside the orders of anticipatory bail granted in the petition of the applicant and other co-accused persons.

The Court also directed them to apply for regular bail and thereafter, the applicant surrendered on May 19, 2021 before the court below at Varanasi and filed application for bail which was rejected and therefore, the Applicant moved High Court seeking regular bail.

Further, noting that there is nothing to show that the death was natural and the instant case is a case of custodial torture and death, the Court remarked thus:

The Court also noted that the Apex Court vide order dated 23.09.2020 passed in Writ Petition (Crl.) No. 8 of 2018 has directed the trial court to proceed with the trial on a day today basis and make an endeavor to conclude it within a period of one year.

In the backdrop, denying his bail plea, the Court remarked thus:

"The applicant is a resident of a different State. He has been in the police force which is a disciplined force and enshrined with the pious duty of maintaining law and order and protecting citizens. His release may have an adverse effect in the trial."