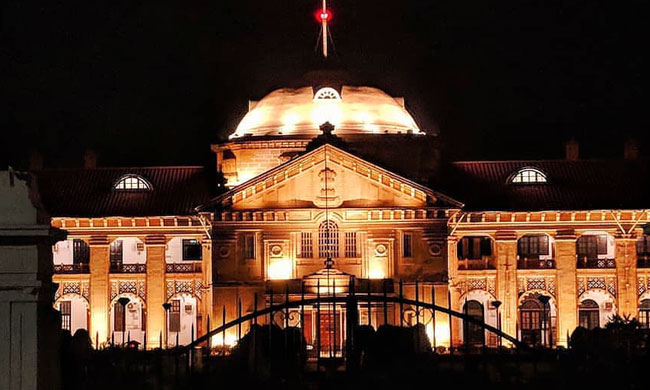 The Allahabad HC on Thursday directed a Bareilly based University to amend the seniority list of its lecturer after 26 years and also held that decisions of Vice-Chancellor and Chancellor of the University were quasi-judicial orders, adjudicating valuable rights of the parties, and as such doctrine of the merger was applicable to them. The undisputed facts of the case were that...

The Allahabad HC on Thursday directed a Bareilly based University to amend the seniority list of its lecturer after 26 years and also held that decisions of Vice-Chancellor and Chancellor of the University were quasi-judicial orders, adjudicating valuable rights of the parties, and as such doctrine of the merger was applicable to them.

The undisputed facts of the case were that the Petitioner was appointed as a lecturer at Mahatma Jyotiba Phule Rohilkhand University, Bareilly, on 20.06.1991 and her seniority had to be reckoned from that date. On the other hand, the Respondents, though appointed earlier to the petitioner were not in substantive capacity but rather on an ad-hoc basis under Section 16 of the U.P. Higher Education Service Commission Act (Commission Act). Their services were regularized on 28.06.1992 under Section 31-C (2) of the Commission Act, i.e., a year after the Petitioner's substantive appointment.

The cause of dispute was the seniority list issued by the institution wherein the Respondents were held to be senior qua the Petitioner. The Petitioner disputed the same before the Principal of the University on various occasions and the circumstances finally culminated into an order dated 23.09.2016 issued by the Vice Chancellor which held the Respondents to be senior on the basis of their length of service with effect from the date of their initial joining as ad-hoc teachers. The aforesaid order was challenged by the Petitioner before the Chancellor under Section 68 of U.P. State Universities Act (the Act) who rejected the representation of the Petitioner. Hence the present writ was filed to challenge the order of the Chancellor.

The Respondents refuted the contentions of the Petitioner on three broad points:

The court did not find merit in the Respondents' arguments and held that the Petitioner had made various representations to the Principal with regards to the dispute. Thus, the cause of action regarding the seniority of the petitioner survived and was alive all through till the decision of the Vice Chancellor and the Chancellor. "Moreover, the cause of action for deciding the matter of seniority is a recurring cause of action which survives till the person or the persons with whom a seniority is disputed retires or leaves the job", the court held.

Assessing various provisions relied on by the parties, the bench comprised by Justice Pankaj Mithal and Justice Saral Srivastava observed that clause (e) of Statute 15.08, relied on by the Respondents provides continuous service on a temporary post to which a teacher is appointed after selection, followed by appointment in a substantive capacity under Section 31 (3) (b) of the Act, shall be counted towards seniority. However, in the present case, the regularization of the Respondents was not under Section 31(3) (b) of the Act but under Section 31-C (2) of the Commission Act. Therefore, clause (e) of Statute 15.08 would not apply to the respondents and the period of ad-hoc services could not be counted for determining their continuous length of service.

The bench also relied on Keshav Chand Joshi & Ors. v. Union of India & Ors., AIR 1991 SC 284, wherein a three judges bench of the Supreme Court held that for the purposes of computing seniority, the length of service had to be counted only from the date of substantive appointment. It was further held that if the ad-hoc appointment was not in accordance with the Rules and was made as a "stop-gap arrangement", the period of officiation on such post was not to be considered for computing seniority.

Addressing the last contention of the Respondents, the court held that decision of the Vice-Chancellor and the Chancellor was quasi-judicial orders and thus by virtue of doctrine of merger, mere challenge to the order of the Chancellor would suffice the Petitioner's obligation.

"The submission of Sri Khare, Senior Counsel that the doctrine of merger would not apply with regard to administrative orders is bereft of merits for the reason that the decision of the Vice-Chancellor and the Chancellor are not orders of administrative nature but quasi-judicial orders adjudicating valuable rights of the parties", the court held.