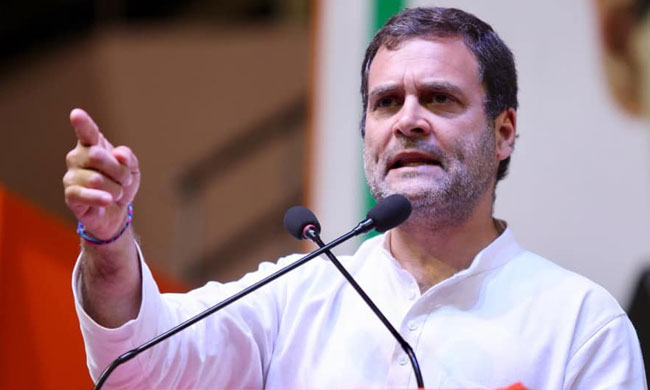 The Gujarat High Court on Tuesday quashed an order of the Surat Court rejecting the application filed by BJP MLA Purnesh Modi to examine 4 additional in a criminal defamation case filed by him against Wayanad MP & Congress Leader Rahul Gandhi. The Bench of Justice Ilesh J. Vora was hearing Section 482 CrPC application filed by Modi seeking quashing of the order of...

The Gujarat High Court on Tuesday quashed an order of the Surat Court rejecting the application filed by BJP MLA Purnesh Modi to examine 4 additional in a criminal defamation case filed by him against Wayanad MP & Congress Leader Rahul Gandhi.

The Bench of Justice Ilesh J. Vora was hearing Section 482 CrPC application filed by Modi seeking quashing of the order of Chief Judicial Magistrate, Surat dated January 5, 2021 whereby, his application filed under Section 311 of CrPC (to examine 4 witnesses) had been rejected.

The applicant, Modi is the complainant of a private case filed under Sections 499 and 500 of the IPC against Rahul Gandhi for his alleged defamatory remarks while addressing a public gathering at Kollar, State Karnataka.

The remarks had been video graphed by the video surveillance team and video viewing team duly notified by the office of Deputy Commissioner and District Election Officer, Kollar District.

The alleged speech being recorded on 3 CDs by Kollar District Election Office was sent to Chief Electoral Office at Bangalore and handed over to one Mr. Ganesh Yaji and in turn, he had handed over the same to one Mr. Raghunath, who had dispatched it to the complainant through courier.

The trial Court after considering the objections raised by Gandhi, gave tentative exhibit to the Pen-drive and 3 CDs subject to prove its contents, authenticity, and source according to the principles of the Evidence Act.

Thereafter, the complainant tendered an application citing witnesses to be examined to prove the authenticity and source of 3 CDs and accordingly, he had examined 2 witnesses, D. Shambhu Bhat, joint chief electoral officer of Bengaluru and one PM Raghunath, working president of Akhil Bhartiya Tailik Sahu Mahasabha and who had originally received the CD of the speech from the election officer.

However, the witnesses could not throw light upon the matter in dispute as 3 CDs have been prepared by the District Election Office, Kollar.

In this background, the complainant i.e., Modi moved an application under Section 311 of the Code to summon the persons of the office of Election Office at Kollar, who have prepared the CDs from the original data of videography.

However, the trial Court rejected this application observing the complainant had examined an adequate number of witnesses to prove his case and again for the same facts, the witnesses cited in his application are not essential for the just decision of the case.

At the outset, the Court observed that the contents of the electronic records is still required to be proved as the Court had, itself, directed the complainant, Modi to prove the admissibility of electronic record following the mandatory provisions like Section 65B of the Evidence Act.

It is important to noted that in Arjun Pandit Khotkar Vs. Kailash Khushan Rao Gorantyal [2020 (7) SCC 1], the Apex Court has recently observed that the certificate required under Section 65B (4) of the Act is a condition precedent to the admissibility of evidence by way of electronic record

Therefore, the Court added, for the admissibility of the electronic record, which is the basis of the complaint, the application under Section 311 of CrPC was filed, so as to enable the applicant to prove the contents of 3 CDs (containing Gandhi's alleged remarks).

Under the circumstances, the Court further remarked:

"For the fair trial, the information contained in 3 CDs can only be admitted and relied upon in evidence when it has been proved in terms of Section 65B (4) of the Evidence Act. The object of underlying Section 311 of the Code is that, there may not be the failure of justice on account of mistake of either party in bringing the valuable evidence on record….Fair trial entails the interests of the accused, the victim, and of the Society, and, therefore, the fair trial includes a grant of fair and proper opportunities to the person concerned, and same must be ensured as this is a constitutional, as well as right. Thus, under no circumstances, can a person's right to fair trial be jeopardized."

Consequently, the Court opined that the dismissal of the application by the Court below was not in consonance with the object and scope, as prescribed under Section 311 of the Cr. P.C and dictum of law settled by the Apex Court.

As a result, the Court quashed the impugned order dated of the Chief Judicial Magistrate, Surat, and thereafter, remitted the matter back to the trial Court for a fresh decision on the application filed under Section 311 of the Code.