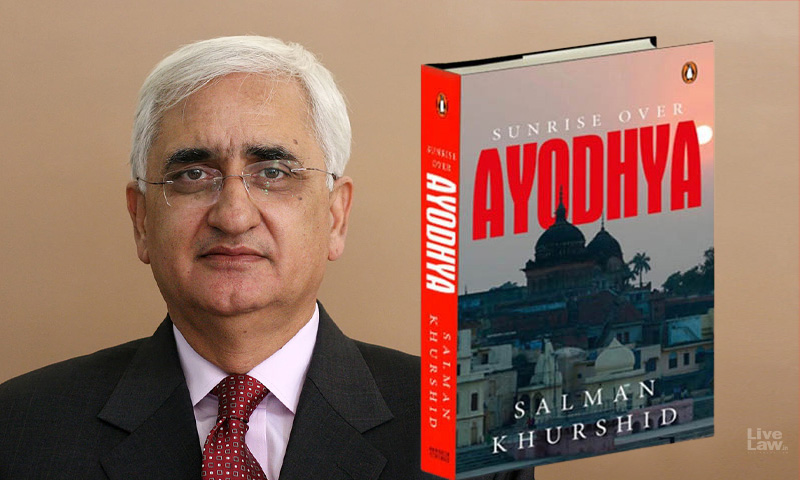 x
Plaintiff can always propagate against the book and can even publish rebuttal to alleged paragraphs which have hurt his sentiments, the Court said.

A Delhi Court on Wednesday refused to grant ad-­interim ex-­parte injunction in the suit filed by Hindu Sena President, Vishnu Gupta against the book written by Former Union Minister Salman Khurshid titled 'Sunrise Over Ayodhya'. The suit has sought prohibitory injunction to stop the publication, sale, circulation and distribution of the book.ACJ Preeti Parewa of the Patiala...

A Delhi Court on Wednesday refused to grant ad-­interim ex-­parte injunction in the suit filed by Hindu Sena President, Vishnu Gupta against the book written by Former Union Minister Salman Khurshid titled 'Sunrise Over Ayodhya'. The suit has sought prohibitory injunction to stop the publication, sale, circulation and distribution of the book.

ACJ Preeti Parewa of the Patiala House Court was of the view that the plaintiff had failed to establish the balance of convenience in his favour, therefore declining the grant of ­interim relief.

"Furthermore, the defendant no.2 & 3 herein have the right to write / publish the book. The plaintiff has not been able to establish that inconvenience will be caused to him to avoid the book or alleged "offensive" excerpts of the book. On the other hand, injunction would lead to hardship for the publishers and also curtail the right of speech and expression of the author," the judge said.

"The plaintiff can always propagate against the book and can even publish rebuttal to the alleged paragraphs which have hurt his sentiments," the Court added.

The suit stated that the plaintiff was shocked to read an excerpt from the book, comparing Hindutva or Hinduism to ISIS and Boko Haram. It was alleged that the same was not only instigating and provoking Hindu sentiments but also hurting the religious sentiments of large number of people belonging to the Hindu religion.

The said excerpt mentioned in page no. 113 of the book read as follows:

"That a passage in the book on page no 113 Chapter 6 with the title "The Saffron Sky" reads that "classical Hinduism known to sages and saints were being pushed aside by a robust version of by all standards a political version similar to the jihadist Islam of groups like ISIS and Boko Haram of recent years."

The Judge was of the view that only the copy of an excerpt was placed on record and that such excerpt cannot be read in exclusion or isolation for interpreting the context in which the said statement was made.

Reliance was placed on Morgan Stanely case where the Supreme Court of India has laid down the following guidelines to be followed by the Court while issuing ex-­parte interim injunction.

"Apparently from the records, it is transpired that the mandatory notice under Section 80 CPC has not been served upon the defendant no.1 (NCT of Delhi through LG) nor any application seeking leave of the Court for exemption from filing the same has been filed, whereas the relief has been sought against all the defendants. It is settled proposition of law that when a suit is itself not maintainable, in such a case ad ­interim injunction cannot be granted," the Court added.

Accordingly, the matter has now been posted tomorrow for arguments or clarification on the maintainability of the suit.

The suit stated that the Book "is an attempt to demonise Hindu religion".

It was averred that such kinds of statements in a book harms the social integrity and hurts the sentiments of millions of Hindus residing in the country and all over the world.

"That the Constitution of India provides every citizen of India with the freedom of speech and expression under Article19(1)(a) but Reasonable restrictions can be imposed on the right to freedom of speech and expression under Article 19 (2) of the Indian Constitution. The rights granted under Article 19 is not an absolute right. They can be restricted by competent authority in the interest of society. That this right comes with some limitations and it must not be misused when it threatens and shakes the harmony of the country and the society," it added.

The suit has been filed through Advocates Akshay Aggarwal and Sushant Parkash.