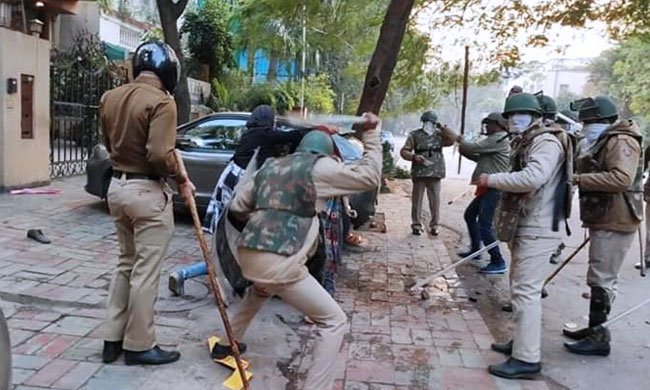 Saket Court has asked Delhi Police to submit an Action Taken Report (ATR) regarding the December 15 incident that took place inside the campus of Jamia University.

The direction has been given in a complaint filed by the administration of Jamia Millia Islamia University, seeking action against alleged police brutality that took place in the campus premises.

Moved under section 156 of the Criminal Procedure Code, the complaint states that the police illegally broke into the campus premises, in absence of any prior permission from the University authorities.

Further, it is also alleged that after illegally breaking into the campus, the police attacked the students with tear gas shells, lathi charge and open firing, and also vandalised public property at the University premises.

As per the complaint, the Chief Proctor of the University had approached the SHO of Jamia Nagar Police Station, on the very next day of the incident. However, till date, no FIR has been lodged against the police officials who were allegedly involved in the December 15 incident.

It is also highlighted that the only FIR which has been lodged in this case, does not pertain to the complaint which was filed by the Chief Proctor.

Regarding the same issue, the Registrar of the University had also written a letter to the Chairman of the National Human Rights Commission, requesting the Commission to investigate the alleged police brutality and unlawful entry into the campus.

On the same date, a letter was also sent to the Joint Commissioner of Police, South East District, to take action on the FIR sought to be registered by the Chief Proctor. However, the police have taken no action regarding the same, till date.

It is also highlighted in the complaint that the University administration has already provided the police with the CCTV footage from the date of the incident.

It is also quoted that despite the multiple reminders sent to the police for the registration of the FIR, no action has been taken on the said representations.

Earlier, a plea was also moved before the Delhi High Court, seeking a judicial enquiry for the December 15 incident, along with interim protection for the students against any coercive action.

While the High Court is yet to pass an order on judicial enquiry, it had denied the students interim protection from coercive action.